The damaging effects of stress are well-known. When confronted with a physical or psychological challenge, your autonomic nervous system and hypothalamic-pituitary-adrenal (HPA) axis respond. When overloaded, your parasympathetic nervous system might be triggered, causing a fight-flight-freeze response. Frustrating as this is—at least when not a true life-or-death threat—this type of jolt is not as common as the chronic stress that permeates the fabric of modern life.

And so your HPA axis, which regulates the level of cortisol released into your body, goes into overdrive. While cortisol is healthy in many regards, such as tissue repair after exercise, too much leads to serious problems with your immune system and metabolism. It also clouds your ability to think clearly and focus.

Chronic stress also leads to compromised memory—the connection between your amygdala and hippocampus impairs your ability to remember when learning occurs under duress. Weight gain results thanks to a constant overload of cortisol. Prolonged stress contributes to debilitating disorders, such as anxiety, depression, and PTSD.

Not that all stress is negative. We need a healthy dose of it on a regular basis. Your bones and muscles benefit from the stress of loading your body through weight training. Stressing your cardiovascular system with high-intensity exercise is critical for heart health. And the stress of stretching through yoga and martial arts positions, then down-regulating with fascia release, breathing exercises, and meditation, makes for a wonderful complement to the activation of your nervous system. 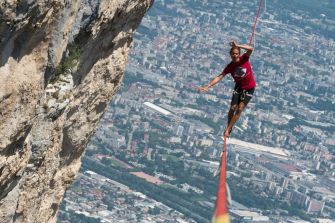 highliner walks on a slackline during the European ‘Marmotte Highline Project’ meeting on July 7, 2017 in Lans-en-Vercors near Grenoble, eastern France. (Photo by Romain Lafabregue/AFP/Getty Images)

Healthy psychological stress is also important. While learning a new language or playing a new musical instrument is challenging, the positive benefits of such brain training are critical to optimal aging and memory retention. Crossword puzzles and many gaming platforms have positive neurological consequences even though they can be stress-inducing in the moment. Stress is in large part how our brains learn and process new information. We’re more likely to remember something while on edge, often to our detriment.

But is stress contagious? Being in the vicinity of a highly-stressed person frays our nerves. This translates online—I never know what will happen when I open Twitter. Social media has proven to be very stressful, while a lack of it is equally taxing on addicts. Can stressful social interactions change the structure of your brain, however?

Using male and female mice for the experiment, researchers from Bains’ team removed one mouse from their partner and exposed them to mild stressors. They were then returned to their partner. The team looked at CRH neurons, which affect the brain’s response to stress, in those partners. As Toni-Lee Sterley, a postdoctoral associate and the study’s lead author, puts it:

What was remarkable was that CRH neurons from the partners, who were not themselves exposed to an actual stress, showed changes that were identical to those we measured in the stressed mice. These neurons create a chemical “alarm pheromone” that is passed along from mouse to mouse to alert them of potential danger.

Bains believes such a signaling technique might be prevalent in another social animal: humans. While we default to ambiguous terminology like “intuition,” this might be part of an evolutionary signaling system altering others to pending threats. As the authors write, information provided during this exchange neurologically primes your tribe for a challenge.

How this affects long-term behavior is yet to be known. As Bains says of this research:

It doesn’t really matter whether it’s your stress or somebody else’s. A transmitted stress changes the brain in the exact same way as a real stress. From an evolutionary perspective, we think these types of signals were likely critical in the formation of social groups.

This is good news for those who think they “pick something up” from a partner or friend. Yet if your friend is always stressed—if they spend too much time on Twitter, perhaps—you might have to question the value of the friendship, unless you’re able to successfully assimilate all of that stress. As the authors conclude, these neurons might explain why some people develop PTSD just from learning about traumatic events others have endured.

We already know smiling is contagious. Chronic stress is not nearly as useful a contagion. If you think you can manage stress without affecting others, you’re probably wrong. Our feelings always influence those around us. We’re now closer to chemical proof of this long-felt assertion.

Related
Life
Our antidepressant drugs are affecting animals and ecosystems
A toxicologist explains the impacts of antidepressants on fish — and no, they’re not getting any happier.
The Past
Ancient migration: Bering Strait land bridge from Asia to North America was not a one-way road
Ancient humans crossed the Bering Strait land bridge from Asia into North America. But some of them went back.
Sponsored
Want to boost your happiness? Buy experiences, not material possessions
Some experiences continue to pay dividends time and time again.
High Culture
Did Paul Cézanne hide an early self-portrait underneath a 160-year-old still life?
To answer that question, we may have to figure out when the famed painter started to go bald.
Strange Maps
Dutch government releases a genuine treasure map from WWII, sparking a hunt for the loot
X marks the spot. The Dutch town of Ommeren has been swamped by detectorists armed with shovels looking for $20-million treasure.
Up Next
Surprising Science
Black stars, not just black holes, may be possible in our weird universe
New research predicts the existence of completely different kind of stars.