Subvocalization is the term used for the narration we all have inside our heads. You’re likely using it right now to read this sentence. MIT scientists have created a device that can pick up the neuromuscular signals created when we subvocalize, which are sent to neural networks that can interpret them.

The device, named AlterEgo, is worn on one side of the face. It looks like a long letter C that loops over the ear and swoops down the jawline. At the other end are two pads. One sticks to an area below the lower lip and the other, below the chin. All told, it looks like a mix between an old sci-fi prop and a medical device. How does it work? When your internal narrator is chattering about this or that, neuromuscular signals are created in the jaw and facial tissue. These are so subtle that they’re undetectable by humans.

The device includes two bone-conduction headphones used to pick up vibrations from the bones of the inner ear, while four electrodes detect neuromuscular signals. These are all sent to a computer equipped with neural networks—a type of A.I. modeled after the human brain. The computer can not only decipher and understand what you’re subvocalizing, it can communicate silently back to you, using what’s known as bone conduction. 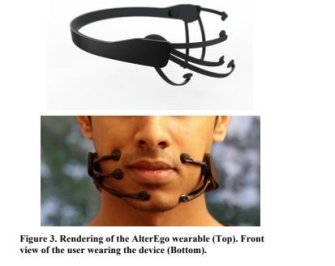 The upside is you can talk with a computer without ever opening your mouth. This could revolutionize how we use computers, mobile devices, or even watch TV. Consider silently clicking through Netflix and picking what you want to watch, without saying a word. This is now possible, according to an MIT promo video.

In one study, researchers interacted with a computer silently to help them solve computational problems. In another, a participant asked a computer the time and got an accurate response. In still another, an AlterEgo user played a game of chess with a colleague. The user registered their opponent’s moves with the computer and got advice from it, all without making a sound.

This is opening up a whole new arena for computer science, what’s being called silent computing. Once we have 5G—just a year or two away by some estimates—a legion of smart devices will hit the market. With AlterEgo, we’ll have a way to “telepathically” communicate to any device we own. In the near future, you might dictate an email, ask Alexa or Siri something, order an item off of Amazon, grab an Uber, or even have a pizza delivered, with just the voice inside your head.

The original device was bulky and cumbersome but over time MIT researchers have gotten it to work smoothly with just four electrodes attached to the face. They believe they can whittle it down to an even more unobtrusive model. Besides personal use, they expect it to be used in high-noise environments, like controlling planes from the tarmac at an airport or on an aircraft carrier. It would also be useful in places like a power plant or a printing press. Special Ops could even use it to organize their unit during an operation, rather than relying on hand gestures. 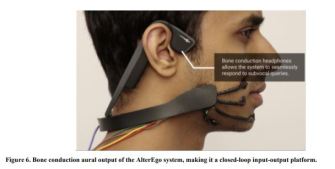 Arnav Kapur is a graduate student at the MIT Media Lab. He’s been developing this technology and said in a press release, “The motivation for this was to build an I.A. device—an intelligence-augmentation device. Our idea was: Could we have a computing platform that’s more internal, that melds human and machine in some ways and that feels like an internal extension of our own cognition?”

Kapur and colleagues recently produced a paper on AlterEgo which they gave to officials at the Association for Computing Machinery’s ACM Intelligent User Interface conference. The idea that subvocalization causes minute internal physical vibrations goes back to the 19th century. Yet, this is the first time it’s being explored for human use. The goal Kapur and colleagues say is to interweave computers, the internet, and A.I. into the human experience, creating what they call a “second self.”

So what’s the downside? Could this tech not also be used to drip propaganda into unsuspecting minds or promulgate fake news? And what safeguards are there to keep advertisers outside of our heads? So far, this is just a working prototype. Tech gurus and legislators alike will need to get in front of this development and come up with some way to make sure such technology isn’t used to corrupt the last free space on Earth, between our ears, while still allowing AlterEgo’s capabilities to usher in a paradigm shift, the likes of which humans have perhaps never known.

Related
The Present
Radical idea: Redraw the U.S. map as a nation of city-states
While cities drive national economic growth, their political geography means they cannot effectively deal with inequality, poverty, and other socioeconomic problems.
The Learning Curve
Why do high IQ people stagnate in their careers? Emotional intelligence
Research suggests that emotional intelligence is more vital for success than IQ.
The Present
Even in the age of AI, some problems are just too difficult for computers
Computers are growing more powerful and more capable, but everything has limits
The Future
How the metaverse will revolutionize K-12 and higher education
Imagine going on a tour through the human circulatory system as a tiny cell. That is just one example of education in the metaverse.
Starts With A Bang
Ask Ethan: What are white holes, and do they really exist?
In General Relativity, white holes are just as mathematically plausible as black holes. Black holes are real; what about white holes?
Up Next
Technology & Innovation
Why having a philosopher in the office is good for business
Want to improve your business? Hire a philosopher.