Aside from Hannibal the Cannibal, what’s the first thing that comes to mind when you hear that someone is a “psychopath”?

A study was recently conducted wherein records regarding 5,500 psychopaths in the United States and around 2,000 in the Netherlands were looked at and divided into qualifications of what their primary symptoms were.

What researchers found after using the Psychopathy Checklist-Revised (PCL-RA-Hare, 2003)  is rather fascinating: In the United States, the psychopaths studied showed predominately callousness and a lack of empathy, whereas the Dutch patients scored much higher in irresponsibility and a “parasitic lifestyle” than the U.S. patients.

An article published in Journal of Abnormal Psychology refers to the use of network analysis to complete the study. 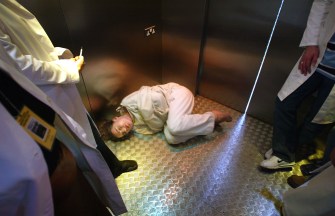 Kiki Kendrick acts in a straitjacket during her solo performance ‘Insane Jane’ performed inside a lift at the 57th Edinburgh Fringe Festival 2003 August 4, 2003 in Edinburgh, Scotland. (Photo by Scott Barbour, Getty Images.)

It could very well be that cultural differences are what separates the patients; the samples were fairly large, in total almost 7,500 cases.

Twenty questions make up the revised psychopathy checklist, and these questions touch on four broad areas of psychopathy, assessing a patient’s:

The study also showed that “shallow emotional experiences” were not nearly as central to the Dutch patients as those in the United States.

As further studies are completed, it may become clearer exactly why there are differences by culture and geography.

“The findings raise the important possibility of cross-cultural differences in the phenotypic structure psychopathy, PCL-R measurement variance, or both,” the authors of the study wrote.

Related
The Past
How the death of alchemy gave birth to modern science
Far from practicing witchcraft, the experimentation of medieval alchemists helped bring about the Scientific Revolution.
The Well
This is what the fourth dimension looks like
Left–Right, Back–Forth, Up–Down. What’s the fourth dimension?
▸
3 min
—
with
Brian Greene
The Present
How heat pumps of the 1800s are becoming the technology of the future
Innovative thinking has done away with problems that long dogged the electric devices — and both scientists and environmentalists are excited about the possibilities.
Starts With A Bang
JWST’s hunt for most distant galaxies gets double boost
Along with gravitational lensing and ALMA’s incredible long-wavelength spectroscopy, JWST is reshaping our view of the early Universe.
Thinking
Finding your essential self: the ancient philosophy of Zhuangzi explained
Adopting a healthy scepticism towards inherited ideas means “emptying the container of the Self.”
Up Next
The Present
A new generation of leaders for new global challenges
In collaboration with the Clinton Global Initiative University