Some commonly held ideas about what we know about the brain are nothing more than myth, and a new study recently published in Frontiers of Psychology has set out to disprove these falsehoods despite their prevalence in culture.

Our infant daughter spent years with her face pressed up against our TV screen supposedly having her learning capacity expanded through classical music and “stimulating images” delivered to her by a then-popular video series, Baby Einstein. At the time, everyone seemed to believe that exposure to classical music had a beneficial effect on young minds. By now, a majority of people who know about neuroscience don’t believe this to be the case, even if a majority of the public still does. Unfortunately, a majority of educators also do. This so-called “Mozart effect” is just one of a handful of popular neuromyths about how the brain and learning work that continue to misdirect parents, students, and most disturbingly, their teachers.

Dispelling the Myth: Training in Education or Neuroscience Decreases but Does Not Eliminate Beliefs in Neuromyths, recently published in Frontiers in Psychology, reveals how hard it is to stamp out these popular untruths. Its authors, led by Kelly Macdonald of the University of Houston, handed out true/false questionnaires to 3,000 members of the general public, 600 educators, and 234 people who had taken a substantial number of higher-education courses on the brain or neuroscience. Participants didn’t do as well as one might hope, especially the more “expert” among them. Every group had people who believed falsehoods about neuroscience, in about the ratios you’d expect.

Some of the most common neuromyths that just won’t let go are these, along with the percentage of people who get them wrong, broken down into the general public, educators, and people knowledgeable in neuroscience:

Of special concern are the educators, for two reasons. The survey involved a mix of them:

First off, educators are responsible for disseminating presumably correct information to their students, thus magnifying many times over the negative impact of any neuromyths they believe.

Second, among the neuromyths are misconceptions about the efficacy of different teaching methods, and so we can surmise that many educators are being less effective as teachers than they could be. Among the education-related myths in the study are these:

Here are the rest of the neuromyths in the study and the percentages of wrong answers the researchers received: 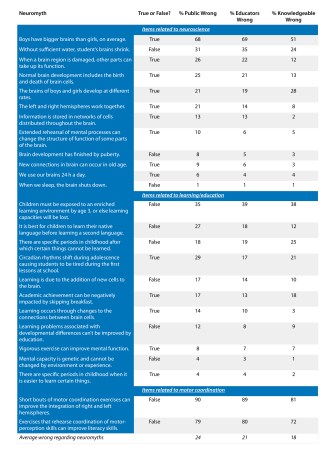 The study did confirm that a greater exposure to neuroscience helped dispel a tendency toward belief in neuromyths, but it doesn’t completely banish them, since “both educators and individuals with high neuroscience exposure continue to endorse about half or more of the ‘classic’ neuromyths, despite their training.”

Maybe the most interesting finding is that certain core neuromyths cluster together statistically, so if you believe one of them, you’re more likely to believe them all. Among these are:

Given their differing subject matter, this may indicate something more about the psychology of the believer than about his or her education level. Still, as the study notes, “Alternatively, it is possible that these neuromyths are taught explicitly and simultaneously in some professional contexts.” This leads to the authors’ somewhat surprising, though perfectly sensible, recommendation for how to effectively combat neuromythology, “Regardless of the source, our data pointing to the clustering of neuromyths suggests that curricula must address multiple misunderstandings simultaneously, perhaps pointing out the connections between myths, in order to effectively address their persistence among educators.”

Related
Starts With A Bang
The path forward for astronomers and native Hawaiians
A history of injustice and the greatest natural location for ground-based telescopes have long been at odds. Here’s how the healing begins.
Thinking
“Give a f***, actually”: The surprising benefits of being grateful for things you dislike
Radical Emotional Acceptance calls on you to celebrate all of life’s emotions — even the negative ones.
Thinking
Visual thinking: How to understand the inner lives of animals
Humans are good visual thinkers, too, but we tend to privilege verbal thinking.
Strange Maps
The world’s longest straight line connects Portugal to China
It’s nearly 20,000 miles long.
The Well
This is what the fourth dimension looks like
Left–Right, Back–Forth, Up–Down. What’s the fourth dimension?
▸
3 min
—
with
Brian Greene
Up Next
Technology & Innovation
Cosmic Riddle: How Can This Star Be Older Than the Universe?
Astronomers have gotten good at dating stars. But this one has them stumped.