We spend roughly a third of our lives asleep, though it’s hard to know how much of that time is spent dreaming. Scientists are still trying to figure out what dreams are and why we have them, though the current leading theory is that dreams are the product of memory consolidation. And yet, for some of us, they contain repeating motifs and locations that suggest a night-to-night, year-by-year continuity. Whether or not we remember our sleeping adventures upon waking, we spend a lot of time dreaming. But do we dream alike? Mattress Advisor queried 1,256 Americans, and the short answer is yes, we do.

The survey was conducted via Amazon’s Mechanical Turk. Of the respondents, 57% were female and 43% male. All were no doubt happy to finally have someone to tell their dreams to who wouldn’t get bored. Participants were 57 years old on average, although their ages ranged from 18 to 81. The study looked at three generations, Baby Boomers, Gen Xers, and Millennials. It also examined the difference between the dreams of men and women.

The collages in this article represent the survey’s findings and were created by Mattress Advisor.

The most common dreams: Going places

All age groups and both genders had the same type of most-common dream: the exploration of new places. Of all the age groups, Boomers were the keenest to travel, with 44.8% of them citing this as their most frequent asleep activity. Gen Xers were only slightly less peripatetic, at 42.1%, while just 36.1% of Millennials were off to new places. Women cited travel dreams 39.1% of the time, and men 37.9%.

Not that all groups shared the same new places. Gen Xers went dark most often, with dreams in graveyards, and subjects even mentioned cavorting among Medusa-inspired beings. Boomers were off to tropical destinations, and also to locations from their younger days. Men reported dreams of being in China, in “sprawling cities with twinkling lights,” in outer space, or even on a new planet.

Interestingly, the survey also asked respondents about the colors associated with their dream experiences. Women’s travel dreams were filled primarily with blues (27.1%) and reds (12.4%). Men’s colors tended toward the earthy, with blues, greens, reds, grays, blacks, and browns.

Sex or love, or flying 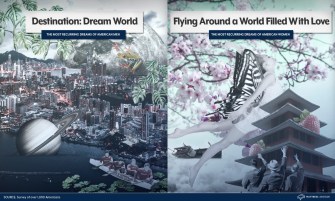 Will it surprise anyone that the second most common dreams for women and men are of falling in love vs. falling into bed, respectively? This fits the stereotypes, anyway. For women, 15.9% dreamt of falling in love, compared to 6.2% of men. Flipping things over shows pretty much the same disconnect, with 15% of men dreaming randy dreams, as opposed to 8.5% of women.

Looking at things generationally, second place shakes out differently. Second place for both Boomers and Gen Xers is flying, with precisely 17.9% of both groups heading aloft. Boomers cite feeling euphoric, peaceful and either excited or excited with a dash of fear, while Gen Xers report an airborne palette of blue, green, red, and multicolors. For Millennials, the second-most common dream is having sex, at 14%, followed by falling in love at 12.1%. That’s more romantic than either Boomers (7.5%) or Gen Xers (9.5%).

Sleeping with the light on 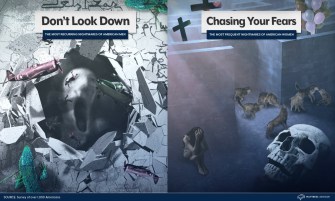 Of course, the other side of dreaming is having nightmares, and respondents were asked about theirs.

Men were most likely to have “stomach-turning,” terrifying nightmares about helplessly falling, at 19.4% of respondents. Their second-most common nightmare was being chased, at 17.1%. Interestingly, for women, the top two are reversed: 19.6% have bad dreams about being chased, while their second place is a two-way tie, actually, with falling being just one of them, at 9.9%. The same percentage of women, 9.6% have nightmares about losing teeth, for some reason. Number 3 for men is being attacked, and for women, it’s their main relationship ending, a worry shared by Millennials, for whom that’s the second-most common nightmare, at 6.4%.

For all three generation groups, though, being chased is the most likely plotline in a nightmare. For Boomers it’s 16.2%, for Gen Xers, it’s 10.9%, and for Millennials, it’s 19.9%, the highest percentage of any group, or indeed, gender. Millennials fears of being chased seem to be pretty specific: They dream about it happening at mass protests, and they dream of frantic escapes from police brutality.

Boomers also have bad nights dreaming of falling (16.2%) and feeling lost (14%). Where do they get lost, you ask? In the mountains, in abandoned buildings, in infinite hallways, in a foreign city (hmm, but their favorite dream was…never mind), and feeling lost when surrounded by undesirable people.

Gen Xers reports lots of blacks, grays, browns, and reds in their nightmares. They also had nightmares about falling, at 10.9% and, here’s an odd one, 10.5% reported imaginary “memories” of being attacked: One said, “Seeing my children and spouse get killed. That would be the worst thing ever to happen in my life.” They also have horror dreams (9.2%) of showing up late at important events and share Boomers’ fear of being lost, at 8.4%.

As noted above, Millennials’ second-most frequent nightmares are about losing a significant other, and their third is about dying at 6.9%. More Millennials have nightmares about dying than their elders, with 5.9% of Gen Xers reporting such dreams, and only 1% of Boomers. Maybe this says something about acceptance of mortality versus its relative proximity.

All three generational groups reported having problems getting a good night’s sleep. Boomers sleep best, with only 10.9% having problems, and Millennials are next at 14.6%. Gen Xers, though, get the worst sleep of anyone, with 16.9% of respondents reporting issues.

One would expect that stress would be a factor in all these sleepless nights. According to the survey, though, Gen Xers aren’t the most stressed. That would be Millennials, with nearly half, 47.7%, reporting levels of stress that keep them up at night. Gen Xers are just behind them though, at 42.9%. Boomers should be sleeping like (old) babies, with only 7.5% saying stress keeps them awake.

What do we learn from all this?

Well, we learn, first of all, that there are certain themes that are common to us all, not that these percentages necessarily reflect our own experiences. We also learn that being chased is a pretty universal source of night terror. Since we don’t even know what dreams are, why we dream what we do is pretty much a guessing game. Mattress Advisor offers some hypotheses, but since they’re really just outright guesses, we haven’t gotten into them here. Feel free to draw your own conclusions regarding what these stats say about us sleepers, perchance to be dreamers.

Related
13.8
The weirdness of quantum mechanics forces scientists to confront philosophy
Though quantum mechanics is an incredibly successful theory, nobody knows what it means. Scientists now must confront its philosophical implications.
Neuropsych
Why is a Starbucks loyalty rewards program making customers so angry?
The rewards price to get a free cup of hot coffee at Starbucks is going up.
Empowering growth
7 essential management training topics for every team leader
From emotional intelligence to problem solving, these management training topics will set team leaders up for success.
Thinking
What if you could rewire your brain to conquer suffering? Buddhism says you can
For Buddhists, the “Four Noble Truths” offer a path to lasting happiness.
Hard Science
Solved: 500-year-old mystery about bubbles that puzzled Leonardo da Vinci
The solution involves the infamous Navier-Stokes equations, which are so difficult, there is a $1-million prize for solving them.
Up Next
Big Think Books
Adults must guide kids’ lives, and give them a sense of self-control
“Our kids are ‘wired’ for control. Our role as adults is not to force them to follow the track we’ve laid out for them; it’s to help them develop the skills to find their own way…”