Considering how much sharks are feared by humans, it is a bit of a surprise that scientists don’t know much about the predators. For example, until recently, sharks were thought to be solitary creatures searching the seas for food on their own. Now it appears that some sharks are quite social.

Another mystery is how these prehistoric swimming and eating machines digest food. Although scientists have made 2D sketches of captured sharks’ digestive systems based on dissections, there is a limit to what can be learned in this way. Professor Adam Summers at University of Washington’s Friday Harbor Labs says:

“Intestines are so complex, with so many overlapping layers, that dissection destroys the context and connectivity of the tissue. It would be like trying to understand what was reported in a newspaper by taking scissors to a rolled-up copy. The story just won’t hang together.”

Summers is co-author of a new study that has produced the first 3D scans of a shark’s intestines, which turns out to have a strange, corkscrew structure. What’s even more bizarre is that it resembles the amazing one-way valve designed by inventor Nikola Tesla in 1920. The research is published in the journalProceedings of the Royal Society B.

What a 3D model reveals

According to the study’s lead author Samantha Leigh, “It’s high time that some modern technology was used to look at these really amazing spiral intestines of sharks. We developed a new method to digitally scan these tissues and now can look at the soft tissues in such great detail without having to slice into them.”

“CT scanning is one of the only ways to understand the shape of shark intestines in three dimensions,” adds Summers. The researchers scanned the intestines of nearly three dozen different shark species.

It is believed that sharks go for extended periods — days or even weeks — between big meals. The scans reveal that food passes slowly through the intestine, affording sharks’ digestive system the time to fully extract its nutrient value. The researchers hypothesize that such a slow digestive process may also require less energy.

It could be that this slow digestion is more susceptible to back flow given that the momentum of digested food through the tract must be minimal. Perhaps that is why sharks evolved something so similar to a Tesla valve.

What is Tesla’s valve doing there? 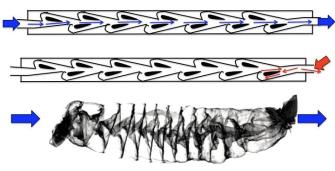 Tesla’s “valvular conduit,” or what the world now calls a “Tesla valve,” is a one-way valve with no moving parts. Its brilliance is based in fluid dynamics and only now coming to be fully appreciated. Essentially, a series of teardrop-shaped loops arranged along the length of the valve allow water to flow easily in one direction but not in the other. Modern tests reveal that at low flow rates, water can travel through the valve either way, but at high flow rates, the design kicks in. According to mathematician Leif Ristroph:

“Crucially, this turn-on comes with the generation of turbulent flows in the reverse direction, which ‘plug’ the pipe with vortices and disrupting currents. Moreover, the turbulence appears at far lower flow rates than have ever previously been observed for pipes of more standard shapes — up to 20 times lower speed than conventional turbulence in a cylindrical pipe or tube. This shows the power it has to control flows, which could be used in many applications.”

Summers suggests the scans are just the beginning. “The vast majority of shark species, and the majority of their physiology, are completely unknown,” says Summers, adding that “every single natural history observation, internal visualization, and anatomical investigation shows us things we could not have guessed at.”

To this end, the researchers plan to use 3D printing to produce models through which they can observe the behavior of different substances passing through them — after all, sharks typically eat fish, invertebrates, mammals, and seagrass. They also plan to explore with engineers ways in which the shark intestine design could be used industrially, perhaps for the treatment of wastewater or for filtering microplastics.

It could fairly be said, though, that Nikola Tesla was 100 years ahead of them.

Tags
Ancient Technologyanimalsbiomechanicsfishoceanstesla
In this article
Ancient Technologyanimalsbiomechanicsfishoceanstesla
Related
Life
Our antidepressant drugs are affecting animals and ecosystems
A toxicologist explains the impacts of antidepressants on fish — and no, they’re not getting any happier.
Thinking
Visual thinking: How to understand the inner lives of animals
Humans are good visual thinkers, too, but we tend to privilege verbal thinking.
Life
Scientists use CRISPR to insert an alligator gene into a catfish
Disease kills off 40% of farmed catfish. This gene protects them.
Hard Science
200 years of exploring Antarctica
What we’ve learning from the world’s coldest, most forbidding, and most peaceful continent.
The Past
Ceramics, corn cobs, and other strange things we used before toilet paper
Some objects were softer than others.
Up Next
Life
Zoo ethics: free-range prisons or centers for global conservation?
The ethical debate over zoos is going to grow louder. There might be a solution that involves robots.