We used to think of death as a moment. We reel when a beloved person meets a tragic end, be it in real life or our favorite show. The reality is, death is often a long, drawn out process that has to do with treatment, hospitals, and in the end, hospice care. Of course, it can strike suddenly too and without warning. But medical science has progressed to the point where we aren’t thinking of death so much as a moment anymore, but a process.

So does that mean we can slow it down or even pause it? According to Dr. Sam Parnia, in his book Erasing Death, new techniques are being used which can reinvigorate the body and the brain. He also believes that death could someday be reversible.

Dr. Parnia has done studies on sustained resuscitation. He says some patients can be brought back merely with CPR, hours after their heart stopped beating, without any permanent damage to the brain. He’s also studied near-death and out-of-body experiences to see if these hold any medical secrets, which could be used to tell us something about the condition. Could a near death experience signify resuscitation of the brain, Dr. Parnia wonders?

“We’ve never had an objective method to go beyond the threshold of death and study what happens both biologically and from a mental and cognitive perspective,” he told NPR’s Terry Gross on Fresh Air. “Therefore everything that we deal with is basically hearsay and people’s own beliefs.”

In his experiments, he found that cooling the body a few degrees Celsius can actually slow the rate of cell death, particularly of neurons in the brain. He isn’t alone. In fact, a number of different medical professionals are leaning toward longevity medicine. 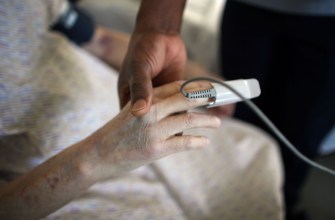 Dr. Parnia believes that a near death experience might signify resuscitation of the brain. Getty Images.

Biologist Mark Roth, at Seattle’s Fred Hutchinson Cancer Research Center, is working with animal subjects, putting them into suspended animation. The idea is that a patient who is in medical crisis could be put into a suspended state like hibernation, until he or she could be stabilized and in this way, get past it.

Though we tend to expire when the oxygen level is low, many animals go into a suspended state in extremely low oxygen environments. In the lab, one must enter into such an environment quickly. Roth is currently working with nematodes—a kind of roundworm—and expects to eventually work up to humans.

A vegetative state is another aspect of what we consider the gray zone between life and death. Medically, this is when sufficient damage to the brain has occurred, where the person isn’t aware of and can’t respond to their surroundings. They may breathe, have a heartbeat, move their eyes, even show reflexes, but they can’t respond to stimuli or interact with the world. Their brain stem is operating normally, but other parts of the brain may be damaged or inoperable. Most patients who enter such a state never leave it.

Now a curious case is shaking up how we consider this condition. A 35-year-old man “woke up” after being in a vegetative state for 15 years. In this study, recently published in the journal Current Biology, French researchers found a way to restore some consciousness to a patient, a feat considered impossible previously. It was thought that patients in this state for a year or longer couldn’t be revived. 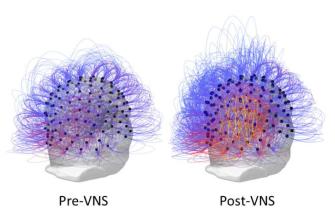 Brain scans of a patient roused from a vegetative state through vargal nerve stimulation. Current Biology.

Angela Sirigu was the lead researcher. She and colleagues, at the of the Institut des Sciences Cognitives Marc Jeannerod, in Lyon, accomplished this by stimulating the vagus nerve, one of the longest running in the body. It goes from the brain stem all the way to the gut and connects to most of the major organs along the way.

Unlike in the movies, where a patient miraculously shoots out of bed after years of being bedridden and unresponsive, Sirigu and colleagues say this was a gradual process. Researchers ran different tests to gauge his awareness.

The man’s eyes widened when someone approached him suddenly, seeing the person as a threat. He was able to stay awake for longer periods when someone read him a book. He could also follow objects with his eyes or turn his head when asked to. This and brain imaging evidence suggests their technique is reaping results.

Vagal nerve stimulation is already being used to treat depression, epilepsy, and other disorders. It activates the noradrenergic pathway, which initiates alertness and can even trigger the fight-or-flight response. Researchers admit little is known about how or why this has helped rouse the patient out of a vegetative state.

Yet, this study may change how medical professionals care for those who have entered such states. Sirigu said, “The sooner we can stimulate it (the vagus nerve), the sooner we can interfere with the body functions and restore some kind of physiological equilibrium.”

This is more of a proof-of-concept study. A larger sample is sorely needed. Sirigu says she and colleagues are putting together a larger, follow-up presently. This is just the beginning.

What’s more, press sensationalism aside, the patient was brought from a vegetative to a minimally conscious state, which isn’t exactly a full recovery. Even if these results can be repeated with other such cases, more studies will be needed to uncover exactly how the technique reaps results.

We’re still a long way away from the day when medical science is able to take the next step and fully restore a patient. But that day is likely to come.

To learn more about the gray areas between life and death, click here:

Being mortal makes life so much sweeter.
The Well

Is science destined to crack the code of consciousness—and how would we even go about it?
▸
8 min
—
with
Max Tegmark
Hard Science

Even the most unorthodox posthumous plans have their own historical, spiritual, and scientific significance.
Thinking

Some neurology experiments — such as growing miniature human brains and reanimating the brains of dead pigs — are getting weird. It’s time to discuss ethics.
Up Next
Strange Maps

Beware of Ronnies (and Other Lessons from the German Election)

As the saying goes: “A Ronny alone is in bad company”