Pandas are pretty cute. They bumble around like playful teddy bears, munching bamboo and falling over themselves and each other. It is thought that their big eyes, round faces, and large heads remind us of babies, and so most people are biologically wired to find them endearing.

They are so likeable that the World Wildlife Fund has them as their logo, and it is believed that their image provides a notable boost in charitable donations. China values them so much that there is a geopolitical principle known as “panda diplomacy,” in which Chinese governments since Mao have loaned or donated pandas to zoos around the world in return for whatever favors.

The problem is that pandas are the cutest, cuddliest parasites in the world. They mooch and scrounge and have humans wrapped around their furry fingers. And while we might think this a bit of indulgent fun, it might have more worrying implications.

The panda is a carnivorous machine. They have large, strong, sharp teeth with jaws strong enough to break through bones. Their paws are crowned with six huge claws, and their fingers are abnormally dextrous compared to similar species. Their digestive system is specifically set up to deal with all the meat they should be eating. On paper, the panda deserves its own Steven Spielberg movie.

With conservation efforts and funding being a finite resource, might it not be better to focus our attention elsewhere than on one species that, quite frankly, played an evolutionary howler hundreds of thousands of years before modern humans were even around?

So why, roughly two million years ago, did some primeval panda get the bright idea to go vegetarian and to munch almost exclusively on bamboo? It is not that bamboo is a bad foodstuff in itself — it is actually quite high in protein — but it is ill-suited for a body designed to digest meat. Herbivorous animals like cows have long, large, and often multi-chambered stomachs to maximize the extraction of nutrients from plants, but pandas have only their small, carnivorous guts. And while pandas have evolved certain adaptive mechanisms, such as stronger jaws for chomping fibrous bamboo and a “false thumb” for holding the stuff, their diet is still massively inadequate for sustaining their lifestyle.

The result: pandas spend 14 hours per day eating, largely because their bodies only digest 17 percent of what they consume. Given that the rest of their day is then spent sleeping or languishing about, it gives the impression that pandas eat so much in order to derive the energy necessary to start eating again.

So, it is hardly surprising that pandas seem uninterested in sex. If an animal only has enough energy to get to its next meal, the whole mating and child rearing business must feel like a lot of effort. Even in humans, those with low BMI and certain eating disorders have decreased libido and tend to avoid sex. 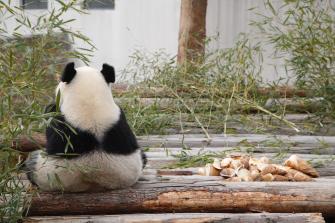 Okay, pandas might be an evolutionary cul-de-sac. But what is the harm in helping them out? A convincing case could be made that their cuteness is why they are so valuable. Conservation charities around the world often use “charismatic megafauna” like lions, dolphins, and pandas in their fundraising efforts because they know fully well that those cute critters are more likely to get us to part with our cash.

Additionally, panda habitats house a variety of other interesting and valuable species, like the red panda, golden monkeys, and certain rare birds found nowhere else. By working to conserve something with a large habitat like the panda, we in turn protect all the smaller ones that live alongside them.

But there are two bigger problems with wanting to “save the pandas.”

The first is the hugely disproportionate amount of money and time we spend on an animal that really is not meeting us halfway. British naturalist and BBC presenter Chris Packham makes the point that, “We spend millions and millions of pounds on pretty much this one species, and a few others… So maybe if we took all the cash we spent on pandas and just bought rainforest with it, we might be doing a better job.”

The problem is that by focusing so heavily on pandas, we miss out on the less aesthetically pleasing but often more endangered species, like insects, amphibians, and fungi. A mushroom is unlikely to have people open their wallets, but it is more important to the food chain than the panda.

Second, by having megafauna lead the fundraising drive, it creates a vicious circle of narrow and elitist resource allocation. When people only see pandas as the face of the “endangered species,” then pandas and other charismatic animals become the beneficiaries of the majority of the money raised. This has implications for how we all understand conservation and biodiversity. By focusing so much on one cuddly species, we create a warped understanding of the food web, keystone species, and ecological niches.

And, to make all of this more salient, pandas are no longer even endangered. All the money and attention is working. It is hard to find anyone who will be upset at this news. Besides Cruella de Vil type characters wanting their panda skin carpets, most people like the idea of pandas being around. But now that they are no longer facing their imminent demise, might this be the time to redistribute or rebalance how we approach conservation?

There are species out there that are dying to be saved, and we could help with far less money and effort than we spent on pandas. With conservation efforts and funding being a finite resource, might it not be better to focus our attention elsewhere than on one species that, quite frankly, played an evolutionary howler hundreds of thousands of years before modern humans were even around?

Missing link? More like the weakest link.
The Present

Universal basic income can secure basic independence for citizens, something which modern states have failed to do, argues author Louise Haagh.
The Present

The modern antiracist movement is harming the very people it claims to help, according to the linguist John McWhorter.
The Present

Employees are quitting at record rates – a trend that shows no signs of stopping.
Life

Despite the wide diversity of spider species, most orb-weavers seem to follow the same playbook when building their webs.
Up Next
Starts With A Bang

Why Earth Isn’t A Technologically Mature Planet Just Yet

The presence of comets and asteroids helps create the zodiacal dust that we see, but also presents the greatest existential threat to our species from space, carrying along with it […]