The 160-million-year-old reptile is officially named Kunpengopterus antipollicatus. Discovered in China, the dinosaur was a darwinopteran pterosaur, a subgroup of pterosaurs, which first appeared 215 million years ago during the Triassic Period. Pterosaurs, like the pterodactyl, were the first vertebrates to evolve the ability of powered flight.

But unlike other pterosaurs, the Monkeydactyl was the only species in its group known to have opposable thumbs. It’s a rare adaptation for non-mammals: The only extant examples are chameleons and some species of tree frogs. (Most birds have at least one opposable digit, though that digit is usually classified as a hallux, not a pollex, which means “thumb” in Latin.)

To analyze the anatomy of K. antipollicatus, an international team of researchers used microcomputed tomography scanning, which generates images of the inside of the body.

“The fingers of ‘Monkeydactyl’ are tiny and partly embedded in the slab,” study co-author Fion Waisum Ma said in a press release. “Thanks to micro-CT scanning, we could see through the rocks, create digital models, and tell how the opposed thumb articulates with the other finger bones.”

“This is an interesting discovery. It provides the earliest evidence of a true opposed thumb, and it is from a pterosaur — which wasn’t known for having an opposed thumb.”

As a tree-dwelling reptile, the Monkeydactyl probably evolved opposable thumbs so it could grasp tree branches, which would have helped it hang, avoid falls, and obtain food. This arboreal (tree-dwelling) locomotion would help the Monkeydactyl adapt to its home ecosystem, the subtropical forests of the Tiaojishan Formation in China during the Jurassic Period.

The researchers noted that the forests of the Tiaojishan Formation were likely warm and humid, thriving with “a rich and complex” diversity of tree-dwelling animals. But while the forests were home to multiple pterosaur species, the Monkeydactyl was likely the only one that was arboreal, spending most of its time in the treetops, while other pterosaurs occupied different levels of the forest. 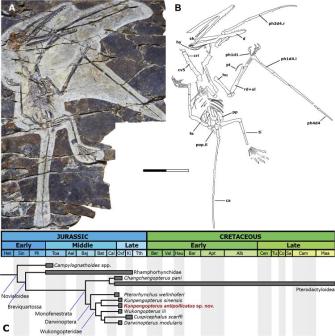 K. antipollicatus and its phylogenetic position. (A and B) Holotype specimen BPMC 0042 (A) and a schematic skeletal drawing (B). Scale bars, 50 mm.Credit: Zhou et al.

This process — in which competing species manage to coexist by using the environment in different ways — is called “niche partitioning.”

“Tiaojishan palaeoforest is home to many organisms, including three genera of darwinopteran pterosaurs,” study author Xuanyu Zhou said in the press release. “Our results show that K. antipollicatus has occupied a different niche from Darwinopterus and Wukongopterus, which has likely minimized competition among these pterosaurs.”

In general, pterosaurs are a prime example of how animals can evolve remarkably specialized adaptations. As pioneers of vertebrate flight, pterosaurs had strong and lightweight skeletons that ranged widely in size, with some boasting wingspans of more than 30 feet. The largest pterosaurs weighed more than 650 pounds and had jaws twice the length of Tyrannosaurus rex.

Unlike birds, which jump into the air using only their hind limbs, pterosaurs used their exceptionally strong hind limbs and forelimbs to push off the ground and gain enough launch power for flight. That these massive dinosaurs managed to fly, and did so successfully for about 80 million years, has long fascinated and puzzled scientists.

The recent discovery shows that pterosaurs developed even more remarkable adaptations than previously thought, suggesting there’s still more to learn about the “monsters of the Mesozoic skies.”

Tags
animalsdinosaursevolutionfossilshistorynature
In this article
animalsdinosaursevolutionfossilshistorynature
Related
13.8
Why the origin of life and the Universe itself might be forever unknowable
There might be a hard limit to our knowledge of the Universe.
Hard Science
200 years of exploring Antarctica
What we’ve learning from the world’s coldest, most forbidding, and most peaceful continent.
High Culture
The most controversial painting in Russian history
Created in the 1880s, “Ivan the Terrible and His Son Ivan,” which depicts a father murdering his son, divides Russians to this day.
The Past
Ceramics, corn cobs, and other strange things we used before toilet paper
Some objects were softer than others.
Life
Most of the seafloor is a thick graveyard of ooze
Each year, several trillion pounds of microscopic silicon-based skeletons fall down the water column to pile up into siliceous ooze.
Up Next
Thinking
Is it good for you? According to Nietzsche, it’s better to ask, “Does it dance?”
Dancing, for Nietzsche, was another way of saying Yes! to life.