One of the great animal mysteries has been whether or not they experience time as we do, or are aware of past, present, and future at all. Of course, we can’t ask them. As a result, we’re left to look for clues to their temporal perspective in behaviors. Two primatologists from School of Psychology and Neuroscience, University of St Andrews, Scotland have perhaps just found some in the warning calls Sumatran orangutans broadcast when they spot a predator. Or really, a few minutes later. It’s the first time we’ve seen what appears to be an animal responding to a past event.

The orangutans are producing what are called “time-space-displaced responses,” and by doing so, they join a very exclusive club: We do this, bees do this, and now orangutans. The paper was authored by Adriano Rei e Lameira and Josep Call, who studied seven Pongo abelii mothers in Sumatra’s Ketambe forest. 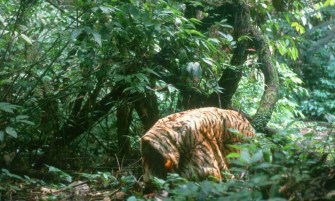 Orangutans’ warning is described as sounding not unlike a human kiss. To elicit one, researchers crawled around on all fours covered by a sheet beneath females perched in trees 5 to 20 meters above. The sheets had one of three patterns: tiger-stripe, spotted, and one plain white. (The tiger sheet proved the most scary, unsurprisingly.) After being spotted by a female, the scientist remained in view for two minutes before crawling out of sight.

The first female they found was accompanied by a young 9-year-old, and as soon as she noticed the “predator,” Lameira tells Science Magazine, “She stopped what she was doing, grabbed her infant, defecated [a sign of distress], and started slowly climbing higher in the tree. She was completely quiet.” The researchers waited for her to warn others. “It was frustrating. Twenty minutes passed. And then she finally did it.” And there was no mistaking what she was doing. “She called for more than an hour.”

The experiment was repeated with another six females — 24 trials in all — and about half the time, a vocal warning sound was produced. When it was, none of them took as long as that first orangutan to raise the alarm — the average was seven minutes. And, as that first subject, these were prolonged warnings, with an average duration of 1519.2 seconds, or just over 25 minutes. 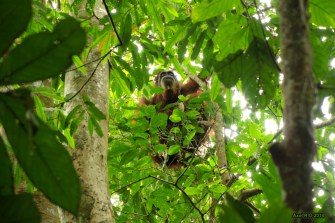 It’s possible that the females hesitated because they were immobilized by terror, but the researchers don’t think this was the case because the mothers exhibited other responses right away, such as defecating from fear and immediately corralling their young and moving to higher branches. Lameira believes they simply understood that setting off an instant alarm would tell the predator where to find its prey. “Because vocal alarms inherently reveal a subject’s presence and position,” he notes, “females appear to delay their response to minimize the perceived possibility of a predator attempting a direct assault, particularly in the presence of an unweaned infant.” And so, “The mother saw the predator as most dangerous to her youngster and chose not to call until it was gone.” After all, as the study says, “There was no [other] reason for orangutan females to vocalize after a predator model was removed, but they did so nonetheless.”

If it wasn’t a concern for safety, what else could be going on, ask the researchers? “To conceptually explain the observed vocal delays seems problematic, therefore, without contemplating the mental capacity to entertain the notion or memory of an encounter with a predator and/or the capacity to wage response timing.”

One interesting pattern the data showed was that the younger the mother’s charge, the more likely to quickly sound an alarm she was once the predator was gone. Lamiera’s team infers that this “indicates that the decision to call or not to call—even after the cause was long gone — derived, in part, as a measure of perceived danger for others.” 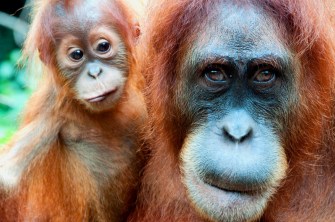 The study finds that, “Postponing behavior in time and space inherently expresses a role of high cognitive processing of the stimulus and general intelligence.” The authors also say, “Our findings suggest that displaced reference in language is likely to have originally piggybacked on akin behaviours in an ancestral hominid.” This may mean that our ability to conceptualize the past may have come to us via a common ancestor with orangutans.

This is something that merits more study. “The lack of evidence for displaced reference in orangutans, and great apes more generally, may not reflect a lack of cognitive capacity but a restricted research focus.” Even so, there is some other similar research showing time displacement in these apes, including the 2013 discovery of future awareness in wild flanged orangutans who broadcast their travel plans a day in advance of their venturing off in search of mates, and of the males at those amorous destinations who apparently rearrange their own schedules accordingly.

Hybrid animals emere when two different species from the same family reproduce. For many years, the kunga’s lineage was just another genetic mystery.
Neuropsych

Certain types of dogs seem to be more discerning than others, however.

Humanity’s most advanced tech still hasn’t unraveled the mysteries of the human mind. Can brain scans show us how we store memories?
▸
with
Lisa Genova
Up Next
The Present