The grey wolf’s sense of smell can detect prey nearly two miles away, and it can hear subtle sounds up to ten miles away. At night, it sees in the dark. When chasing prey, it can reach a speed of 35 mile per hour and deliver crushing bites with 1,500 pounds of pressure per square inch of jaw. Wolf packs have also been known to take down much larger prey, like moose or bison.

As for their distant cousins, the domesticated dog, I once had a dog who would fart himself awake at night and stare accusatorily at me.

Despite their differences, grey wolves are the closest living relative to the domesticated dog. They share an extinct, unknown ancestor, an apex predator that likely hunted ancient megafauna. But at some point, one of the descendants of that ancient ancestor learned how beneficial it was to hunt alongside humans. In tracking game, we became closer as hunters. Eventually, proto-dogs left the wildness behind and began to transform. Their ears became floppier, their coats grew lightly-colored patches. Their personality — perhaps after getting to know human children over centuries — became more playful and less fearful. The changes continued: their snout shortened, and their teeth and brain shrunk. 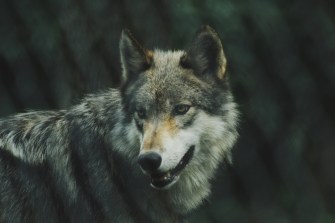 Photo by Michael LaRosa on Unsplash

How did this change happen?

The common logic says that the wolves’ new environment, one spent in frequent contact with humans, put a pressure on them to become friendlier. Eventually, humans began breeding these dogs for certain desirable traits, such as a border collie’s herding instinct or a pug’s cute (and extremely unhealthy) squashed snout.

This is true to an extent. But upon observing other animals undergoing domestication, scientists noticed something strange. They all seemed to change in the exact same way.

Consider, for instance, the case of Dmitry Belyaev, a Soviet biologist who experimented with breeding wild foxes. The sole basis of his experiment was to take a generation of wild foxes and breed the ones friendliest to humans. The experiment is still ongoing today, nearly 60 years and many fox generations later. Now, the foxes are exceptionally friendly (though not quite ready to be pets). In addition, like domesticated dogs, their coats have splashes of lighter color, their tails curl, and their ears are floppy.

Similar changes have been observed in domesticated cats, horses, pigs, ferrets, camels… the list goes on. Somehow, selecting for friendliness towards humans in animals — domesticating them — causes a constellation of seemingly unrelated physiological changes. Researchers have given this mystery a name: Domestication syndrome.

Now, researchers have discovered a compelling reason why these changes are indeed related, and it has to do with something called neural crest cells. 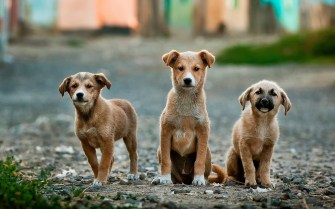 These dogs display the floppy ears, short snouts, and lighter pigment on their faces and chests common to domesticated animals. Photo by Anoir Chafik on Unsplash

This structure is responsible for releasing adrenaline and noradrenaline in response to stressful stimuli: essentially, it contributes to the flight-or-fight response, fear, and stress. Wild animals obviously need their neural medulla to be sensitive. For a grey wolf, the world is a dangerous place, not least because of humans. But if we want a wolf to be more like a dog, less inclined to fear humans and behave aggressively, then we would breed two relatively unafraid wolves together, selecting for a weaker neural medulla. If their adrenal medulla is less developed, then at some point the wolf’s neural crest cells were somehow repressed during its development.

Over time, selecting for animals with fewer neural crest cells produces a friendlier critter. But these cells play a diverse role in the body: they’re stem cells, so they become many different things. Among these, neural crest cells become melanocytes, which create darker colors in skin or fur. Because the development of neural crest cells is degraded in domesticated animals, these cells don’t have the chance to spread uniformly throughout the body. Instead, distant regions in the body become splotchy, which is why many dogs have lighter patches of fur above their eyes or on their chest. 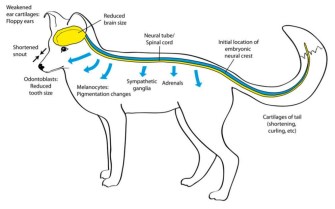 As the dog develops in the womb, its neural crest cells are located in the spot that will eventually become the base of the tail. Because these cells are repressed in domesticated dogs, they can’t spread throughout the body. As a result, distant regions like the skull, brain, ears, and facial and chest fur are often affected.

If you look at other animals besides dogs, these traits hold true. Domesticated horses have spotted pelts. Cats often have bands of color (although they rarely have floppy ears). Domesticated mice, foxes, ferrets, birds, and even fish all share some combination of these different traits.

Human beings have bred these animals for friendliness, but as an unintended side effect, we have changed their physiology in drastic ways. While their appearance is drastically different, the changes in their genome can almost be considered subtle. There are many genes responsible for the production of neural crest cells. When any one of these genes is completely shut down, it’s often fatal for the animal. Or, if these genes are downregulated too much, then we begin to see genetic disorders appear such as Waardenburg syndrome, Treacher Collins syndrome, or Mowat-Wilson syndrome (interestingly, one of the symptoms of Mowat-Wilson syndrome is excessive friendliness).

In domesticated animals, many of these genes are just ever-so-slightly downregulated to put the right limit on neural crest cell production during an animal’s development. As a result, you get a healthy, friendly, floppy-eared dog instead of an apex predator fetching the paper for you in the morning.

Tags
animalsbiologyevolutiongeneticsnaturephysiology
In this article
animalsbiologyevolutiongeneticsnaturephysiology
Related
13.8
Why the origin of life and the Universe itself might be forever unknowable
There might be a hard limit to our knowledge of the Universe.
Hard Science
200 years of exploring Antarctica
What we’ve learning from the world’s coldest, most forbidding, and most peaceful continent.
Strange Maps
The great European house cat migration
Ancient bones reveal that domesticated felines were at home in Pre-Neolithic Poland around 8,000 years ago.
Life
How artificial intelligence is helping us decode animal languages
Communication among cetaceans, like whales and dolphins, looks especially promising.
Health
Visualizing cells at previously impossible resolutions provides vivid insights into how they work
Cryo-electron tomography, or cryo-ET, is the future of cell research.
Up Next
Hard Science
In the beginning . . . what?
To explain the origin of everything, science needs to explain itself.