Between the heartrending sad eyes when we leave and the explosion of happiness when we return, many (rightfully flattered) dog owners reasonably wonder what happens in-between. The physical evidence suggests nothing really bad happens—outside the occasional chewed slipper—but it’s nonetheless clear our dogs would prefer not to be left behind.

A new study from researchers at the Universities of Pisa and Perugia, Italy, confirms that canines don’t exhibit signs of extreme upset while we’re away. However, the scientists found that dogs do have an easier time emotionally when we give them an affectionate, gentle petting before leaving.

The study is published in ScienceDirect. 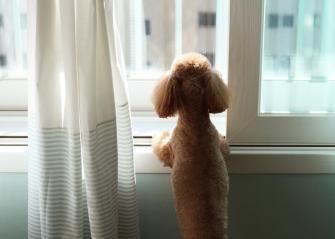 The researchers conducted experiments with 10 healthy dogs between 1-11 years old and without unusual attachment issues. Six were spayed females and four were neutered males. The group was composed of seven mixed-breed dogs, one Labrador retriever, one Hovawart, and one Chihuahua.

The tests were conducted in an outdoor, fenced-in area and were videotaped for later analysis. Their owners walked their leashed dogs into the fenced area where they greeted a researcher, AKA Test Leader 1. A second researcher measured the dog’s heartbeat using a phonendoscope and quickly departed.

In both tests, after the brief chat, the owner handed the leash to Test Leader 1 and hid behind a shed for three minutes at a distance considered too far for the dog to pick up its owner’s scent. The dog was free to move around the enclosure to the extent that the 1.5 meter leash allowed. The dogs spent a significant amount the time looking for their owner—in three minutes, they searched for between 84.5 and 87.5 seconds.

After the separation, Team Leader 1 called over the owner, and the leash was handed off. After 15 minutes of light activity, the dog’s saliva was tested for the presence and level of the stress hormone cortisol.

All dogs participated in both tests, separately. Tests were spaced 5-9 days apart and took place at roughly the same times for consistency of cortisol levels.

The researchers found that when dogs had been petted they exhibited a more relaxed demeanor during the separation.

Cortisol levels were the same after both tests.

The study suggests it would be a good idea to develop the habit of building in a little extra departure time for your buddy each time you plan to leave home. Your dog will be happier for it.

Tags
animalsdogsrelationshipssciencetrust
In this article
animalsdogsrelationshipssciencetrust
Related
Thinking
Visual thinking: How to comprehend animal consciousness
Humans are good visual thinkers, too, but we tend to privilege verbal thinking.
Life
Scientists use CRISPR to insert an alligator gene into a catfish
Disease kills off 40% of farmed catfish. This gene protects them.
Hard Science
200 years of exploring Antarctica
What we’ve learning from the world’s coldest, most forbidding, and most peaceful continent.
Strange Maps
The great European house cat migration
Ancient bones reveal that domesticated felines were at home in Pre-Neolithic Poland around 8,000 years ago.
Life
How artificial intelligence is helping us decode animal languages
Communication among cetaceans, like whales and dolphins, looks especially promising.
Up Next
Starts With A Bang
Ask Ethan: Why Doesn’t Gravity Happen Instantly?
It doesn’t propagate at infinite speeds, and that’s a problem for Newton.When you look at the Sun, the light you’re seeing isn’t the light that’s being emitted right now. Instead, you’re […]