There are a lot of strange ideas floating around, especially when it comes to purification. Juice cleanses are supposed to purify your body. (They don’t.) Colonics are wonderful for clearing toxins from your intestines. (Highly questionable.) The “essence” of an ingredient is a healing agent. (Lol.) The recitation of a mantra purifies the soul. (Impossible to prove or disprove, as is the notion of a soul.)

One theory that’s on solid footing is the notion that house plants purify the air. Or is it? Recently, a study appeared in the Journal of Exposure Science & Environmental Epidemiology that puts that long-held myth into question.

In this case there is precedent. Study authors Bryan E. Cummings and Michael S. Waring from the Department of Civil, Architectural and Environmental Engineering at Drexel University write that potted plants have previously been shown to remove airborne volatile organic compounds (VOC) in sealed chambers. Extrapolate by placing plants around your apartment or house and you end up with a natural air purification system.

This idea was first floated in a 1989 report included in the NASA Clean Air Study. Researchers tested plants, such as ficus and peace lilies, to see if they could cleanse the air of three VOCs: benzene, formaldehyde, and trichloroethylene. After a 24-hour period, the team noted that between 10-70 percent were removed. Plant stores found a new advertising slogan.

The problem, Cummings and Warring note, is that the chambers were a cubic meter in size. They were also sealed, unlike the buildings we inhabit. Scouring over 196 experiments in their meta-analysis, they conclude that even at their best, plants deliver less than 1 percent of toxin removal that an air purifier accomplishes. 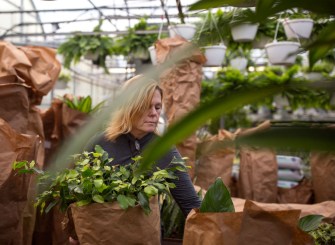 Jill Valley-Orlando organizes houseplants from a recent shipment in the greenhouse at Broadway Gardens on Wednesday, January 16, 2019.

This matters as humans spend, on average, 90 percent of their time indoors. On top of this, Cummings and Waring note that, “Much, though not all, of indoor pollution is sourced directly from the indoor environment itself.” Air fresheners, paints, glues, printers, and permanent markers (among other manufactured products) add VOCs into the air we breathe. Poor indoor air quality has been implicated in a variety of health risks, including respiratory diseases and headaches.

All is not lost, however. As the authors note, “Indoor plants, by helping to create a more biophilic indoor environment, may have a positive impact on occupant well-being.” However, they write that indoor plants have a tendency to raise humidity levels. Some even produce VOCs of their own.

Nothing is ever a clear-cut as it seems. This is not a call for removing house plants. They make a lovely addition to home and office environments. We just have to recognize that their appeal is aesthetic and emotional, not as agents in our long quest for purity.

Some astrobiologists believe life is rare, while others believe it is common in the Universe. How can we find out which view is correct?
The Present

An effect called the “urban heat island” means that temperatures are often 10 degrees higher in cities, according to NASA.
The Well

Are physicists about to decode a mysterious field of science that could have huge implications for your health?
▸
with
Jim Al-Khalili
Life

Disgusting behavior is often crucial to survival.
The Well

Basic and breath-taking – Dr. Frank Wilczek addresses symmetry’s critical role in nature’s laws and what we consider to be beautiful.
▸
with
Frank Wilczek
Up Next
Starts With A Bang

Neptune is typically a faint blue object easily missed through a telescope or binoculars. But during a conjunction, where there’s a very close reference object, it’s easier to spot than […]