Rabbits are, of course, adorable. We kvell over awww-inducing pictures of the little cuties who look like they couldn’t hurt a fly. (Fun fact: Male rabbits are incredibly fierce when they fight each other and will actually fight to the death.)

Rabbits have been around for a long time, and they don’t exhibit the same variations in size as for example, rodents. Even a big rabbit is not as big as, say, a capybara that can weigh from 60 to 200 pounds. Likewise, there is no rabbit anywhere near as tiny as a pigmy mouse of sub-Saharan Africa, which can weigh as little as 3 grams or as much as a zaftig 12 grams.

Researchers at Kyoto University’s Primate Research Institute wondered why there are no horse-sized — or for that matter, tiny — lagomorphs. The lagomorph order includes rabbits, pikas, and hares.

The curious scientists recently published a paper titled “Why aren’t rabbits and hares larger?” in the journal Evolution. It suggests the answer to this question may say something about the factors that most profoundly influence a species’ evolution. 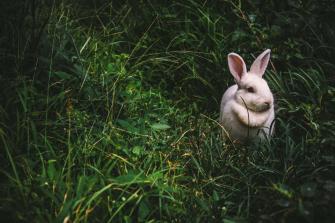 After analyzing the available fossil record to explore how lagomorphs have fared through time, the team came to suspect that their size tended to be constrained by competition for food with larger herbivores.

As the researchers investigated the ecosystems in which lagomorphs lived, creatures of a different order, ungulates, came to their attention. Ungulates are an order of hoofed mammals including horses, rhinoceroses, and pigs. It also includes cloven-hoofed animals like cows and sheep.

It seems that ungulates were more than mere neighbors of rabbits, hares, and pikas. Similarly sized ungulates probably were their competitors.

The researchers calculated that large lagomorphs would require an excessive amount of energy — food, water and so on — to thrive, considerably more than smaller rabbits and hares. As a result, Tomiya says that when they compared “how much energy is used by populations of lagomorphs and ungulates relative to their body sizes,” they found “that lagomorphs weighing more than six kilograms are energetically at a competitive disadvantage to ungulates of the same size.”

To confirm their theory, the researchers next looked at the fossil record of North America. They found that the smallest hoofed animals predicted the size of the largest bunnies.

It remains true to this day, he says. “We see this pattern today across numerous eco-regions, suggesting that there is an evolutionary ‘ceiling’ placed on lagomorphs by their ungulate competitors.”

The red queen versus the court jester

Tomiya says the study may help resolve biologists’ ongoing “red queen” vs. “court jester” debate over the type of forces that most affect a species’ evolution.

The red queen represents biotic forces and the court jester abiotic factors. (“Biotic” refers to other organisms that live in the same ecosystem as a species being studied, while “abiotic” refers to non-living factors such as climate, light, the quality of water, and so on.)

“For some time,” says Tomiya, “the court jester model — ascribing diversity to abiotic forces such as the climate — has been dominant, due to the difficulty of studying biological interactions in the fossil record.” He says the study’s findings show that the red queen shouldn’t be counted out when it comes to influencing evolution.

More than 90% of human faces are home to mites that live in our skin pores. These friendly guests might be merging with us.
Up Next
Thinking

The Axial Age: When the greatest minds walked the earth

The Jewish prophets, Plato, Sun Tzu, and Buddha all lived in a “golden age” of philosophy that laid the foundation of modern thought.