Scientists have known about them at least since the 1950s, when Jón Eythórsson named them “jökla-mýs,” which translates as “glacier mice.” However, they’re not actually mice. They’re smallish balls of moss, and there are lots of them atop Alaska’s Root Glacier. They can also be found on ice in Iceland, Svablard, and even South America, presumably places with just the right conditions, though researchers don’t know what those conditions are.

The really odd thing about them is that they apparently move in some unexplained way, though no one has observed them doing so. It’s just that repeated visits find them in different places.

And that’s not the coolest part. “The whole colony of moss balls, this whole grouping, moves at about the same speeds and in the same directions,” geologist Tim Bartholomaus of University of Idaho (UI) tells NPR. “Those speeds and directions can change over the course of weeks.”

Bartholomaus and two colleagues have published their research on glacier mice in Polar Biology. 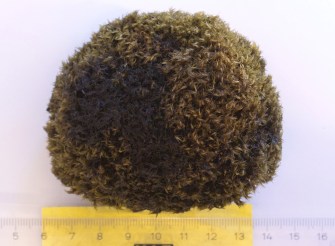 The “glacier mice” nickname has stuck perhaps because glaciologists are so fond of the fuzzy things. They are pillow-like, soft, squeezable objects, comprised of different species of moss, but that is not all.

A 2012 study found entire thriving habitats inside the mice. “I had expected to find some animals, but not so many,” said study author and arctic biologist Steve Coulsonto to the New York Times. His research revealed springtails (six-legged insects), tardigrades (of course), and simple nematode worms. In a single mouse, there were 73 springtails, 200 tardigrades, and 1,000 nematodes.

Co-author of the new study, wildlife biologist Sophie Gilbert of UI describes them:

“They really do look like little mammals, little mice or chipmunks or rats or something running around on the glacier, although they run in obviously very slow motion.” 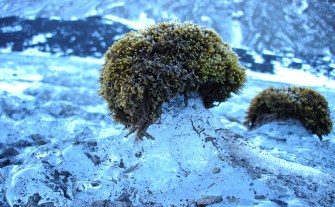 Her report recounts the efforts made by Bartholomaus and his co-authors, which also included biologist Scott Hotaling of Washington State University, to figure out how the mice are getting around.

The 2012 study outfitted some mice with accelerometers and confirmed that they do rotate, but that’s as far as its authors went into the balls’ means of travel.

For Bartholomaus and his cohorts, there were some clues going into this.

For example, occasionally, balls are found perched on a pedestal of ice as seen above, perhaps shading that spot from melting sunlight until it finally melts and the ball rolls away.

Another clue is the intact nature of the healthy moss that serves as each ball’s surface — it’s a sign that they all have their turn in the sun. “These things must actually roll around or else that moss on the bottom would die,” says Gilbert.

One obvious explanation was quickly ruled out — they’re not simply rolling downhill, because many of them were found to be on level surfaces.

Bartholomaus explains, “By coming back year after year, we could figure out that these individual moss balls were living at least, you know, five, six years and potentially much, much longer.”

Although the researchers expect the movements of the balls would be individualized and random, that’s not what they found. The balls moved about an inch a day, and together, like a herd of animals.

Also, they periodically changed direction. “When we visited them all, they were all just sort of moving relatively slowly and initially toward the south,” Bartholomaus said. “Then they all started to speed up and kind of start to deviate toward the west. And then they slowed down again and progressed even farther to the west.”

Wind, maybe? Measurements of the dominant winds in the area ruled that out. Sunlight patterns also failed to account for the movement of the packs.

Given scientists’ affection for the little balls, other people are also rolling the idea around in their minds. Ruth Mottram of the Danish Meteorological Institute suggests to NPR, “I think that probably the explanation is somewhere in the physics of the energy and the heat around the surface of the glacier, but we haven’t quite got there yet.”

Another theory put forward is that the moss on a ball’s underside grows and pushes it over and forward, cueing up the next moss to begin growing in the same way. If growth rates from ball to ball are similar, this could explain their herd-like movement.

The mystery is reminiscent of the “sailing stones” of Death Valley that perplexed scientists for years unit their secret was revealed: They’re pushed around by the wind as they temporarily float on wet melting ground ice.

The list includes eleven species of birds, eight species of freshwater mussels, two fish, a bat, and a plant from the mint family.
Strange Maps

69 percent of the global diet is “foreign,” says a study that pinpoints the origin of 151 food crops.
Health

On Sept. 23, 2020, it was reported that black licorice was the culprit in the death of a 54-year-old man.
Up Next
Neuropsych

When facing a hard decision, consider choosing change over inaction.