History has not been kind to Earl Butz. From 1971–76, the Indiana native served as secretary of agriculture, reengineering several New Deal-era farm programs. One of his most famous statements, that large-scale farmers need to plant commodity crops from “fencerow to fencerow,” became a historical landmark for the destruction of the family farm — critics were surprised given that he grew up on his family’s dairy farm. His championing of corn, for example, has led to numerous problems for our soil and stomachs today.

Yet I couldn’t help but think of Butz when I read a new report, published in Nature on December 13, from Chalmers University of Technology, Sweden. The school’s researchers studied the impact of organic and conventional food production on the climate. What they found is that organic farming results in higher carbon emissions than conventional farming.

Our study shows that organic peas, farmed in Sweden, have around a 50 percent bigger climate impact than conventionally farmed peas. For some foodstuffs, there is an even bigger difference — for example, with organic Swedish winter wheat the difference is closer to 70 percent.

The reason for this is simple: organic farming takes up much more land. This applies to vegetables, but also meat, as organically-raised livestock require food that is free from fertilizers, according to Wirsenius. The “Carbon Opportunity Cost,” their new measure of agriculture’s environmental impact, includes the deforestation necessary to clear more land for organic farms.

This is tough news for those of us that support and purchase organic foods. Thanks to the journalist Michael Pollan, I too am a fan of Joel Salatin’s food writings on natural agricultural cycles, not only from an ethical standpoint but also in honoring how all aspects of farming interact with one another. Mono-cropping — growing the same fruits and vegetables on same plot of land each year — has caused disastrous environmental and cultures impacts, such as soil erosion and the displacement of indigenous peoples. There is no doubt that fertilizer-heavy “conventional” techniques are not good for the planet either.

Yet we have to face the fact that the planet might not be able to sustainably support 7.7 billion people — by 2050 we are poised to reach 9.8 billion. While many people champion organic food (whether for health or ethical reasons) Wirsenius states an increase in organic food production will likely raise carbon output, compromising sustainability. He does note that type of food matters, however.

Eating organic beans or organic chicken is much better for the climate than to eat conventionally produced beef. Organic food does have several advantages compared with food produced by conventional methods. For example, it is better for farm animal welfare. But when it comes to the climate impact, our study shows that organic food is a much worse alternative, in general. 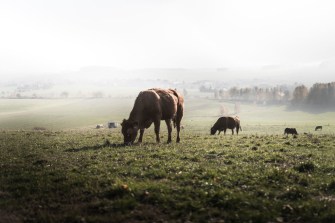 Cows on a pasture are pictured on November 10, 2018 in Koenigshain, Germany. Photo credit: Florian Gaertner/Photothek via Getty Images

Wirsenius also says that beef and lamb are the worst for the environment, while pork, chicken, fish, and eggs have less of an impact. He recommends choosing beans over cheese for a protein source if environmental impact is important to you.

Butz was a corporate shill whose legacy was more harmful than helpful. Yet, he was right that we needed the best yield from the least amount of space. His methods of attaining such have been damaging to our ecology and bodies, but it doesn’t change the fact that sustaining our current population produces serious consequences. If anything is “natural,” it’s this fact: There is only so much the planet can provide before we’ve exhausted its resources.

Tags
animalsbiosphereclimate changeconservationfishhealthsustainability
In this article
animalsbiosphereclimate changeconservationfishhealthsustainability
Related
Life
Our antidepressant drugs are affecting animals and ecosystems
A toxicologist explains the impacts of antidepressants on fish — and no, they’re not getting any happier.
Thinking
Visual thinking: How to understand the inner lives of animals
Humans are good visual thinkers, too, but we tend to privilege verbal thinking.
Life
Scientists use CRISPR to insert an alligator gene into a catfish
Disease kills off 40% of farmed catfish. This gene protects them.
Hard Science
200 years of exploring Antarctica
What we’ve learning from the world’s coldest, most forbidding, and most peaceful continent.
Strange Maps
The great European house cat migration
Ancient bones reveal that domesticated felines were at home in Pre-Neolithic Poland around 8,000 years ago.
Up Next
Smart Skills
How to brain hack your New Year’s resolution for success
It’s not about the resolution but about how your mind tackles the problem.