A common moth, found in pantries, could explain a crucial link between society and selfishness, according to a new study. Researchers showed that an increase in sibling interaction resulted in less selfish behavior in Indian meal moth caterpillars. In particular, the scientists observed an effect on cannibalism, a behavior some times observed in the moths.

While the experiments dealt with insects, the researchers claim its evolutionary principle conclusions can be extrapolated to humans.

Known also as pantry or weevil moths, the Indian meal moths tend to be a nuisance, laying eggs in cereals, flour, and other foods. What’s noteworthy is that they sometimes eat each other, including members of their own brood.

The researchers were able to effect the rates of cannibalism in these moths by controlling how much individual insects could travel from each other. This had an impact on whether sibling moth larvae interacted with each other. The more interaction, the less selfish behavior like cannibalism was observed within 10 moth generations.

The study was carried out by the Rice University Biologist Volker Rudolf, Mike Boots of the University of California, as well as Dylan Childs, Hannah Tidbury, and Jessica Crossmore from U.K.’s University of Sheffield. 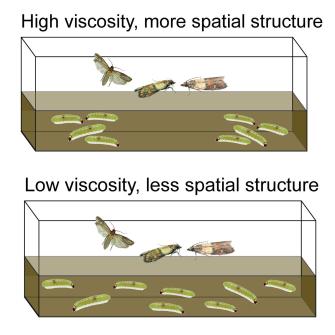 In enclosures (top) where food was stickier, caterpillars were more likely to interact with their siblings. Credit: Volker Rudolf/Rice University

Volker explained why cannibalism, which has been found in over 1,000 species, was worth studying:

“At one end of the continuum are altruistic behaviors, where an individual may be giving up its chance to survive or reproduce to increase reproduction of others,” said Rudolf. “Cannibalism is at the other extreme. An individual increases its own survival and reproduction by literally consuming its own kind.”

The study supported a 2010 theoretical prediction by Rudolf and Boots, providing experimental proof of a key idea from evolutionary theory. The scientists proposed that as local interactions would increase, the pressure to avoid selfish behaviors would also increase.

Applying their conclusions to humans, Rudolf claims that in societies where people live in large family units, there’d be less selfish behavior to find. In more isolated groups, however, where people are separated from their families and live among strangers (because of moving, for example), the reverse would be true.

Eating your own kind can also be influenced by food options, with Rudolf suggesting that “If food conditions are poor, cannibalism provides additional benefits, which could push for more selfish behavior.”

Another factor effecting this type of phenomena – spotting your relatives. If an animal recognizes kin, “that limits the cost of cannibalism” but also means “you can afford to be a lot more cannibalistic in a mixed population, which can have evolutionary benefits,” proposed Rudolf.

The scientists plan to study further how cannibalism functions in animal groups.

Check out their paper published in Ecology Letters.

What’s one of the most reliable indicators that a first date is going well? The answer might lie in how closely the couple is matching each other’s behavior and physiology. […]
Life

More than 90% of human faces are home to mites that live in our skin pores. These friendly guests might be merging with us.
Up Next
The Present

Why the capitalist market model destroys the safeguards of some professions

The neoliberal call for more ‘choice’, seems hard to resist.