The bristle worm, also known as polychaetes, has been around for an estimated 500 million years. Scientists believe that the super-resilient species has survived five mass extinctions, and there are some 10,000 species of them.

Be glad if you haven’t encountered a bristle worm. Getting stung by one is an extremely itchy affair, as people who own saltwater aquariums can tell you after they’ve accidentally touched a bristle worm that hitchhiked into a tank aboard a live rock.

Bristle worms are typically one to six inches long when found in a tank, but capable of growing up to 24 inches long. All polychaetes have a segmented body, with each segment possessing a pair of legs, or parapodia, with tiny bristles. (“Polychaeate” is Greek for “much hair.”) The parapodia and its bristles can shoot outward to snag prey, which is then transferred to a bristle worm’s eversible mouth.

The jaws of one bristle worm — Platynereis dumerilii — are super-tough, virtually unbreakable. It turns out, according to a new study from researchers at the Technical University of Vienna, this strength is due to metal atoms. 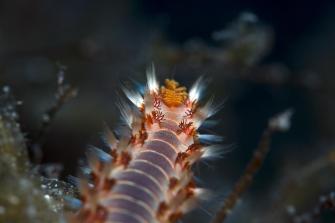 This is pretty unusual. The study’s senior author Christian Hellmich explains: “The materials that vertebrates are made of are well researched. Bones, for example, are very hierarchically structured: There are organic and mineral parts, tiny structures are combined to form larger structures, which in turn form even larger structures.”

The bristle worm jaw, by contrast, replaces the minerals from which other creatures’ bones are built with atoms of magnesium and zinc arranged in a super-strong structure. It’s this structure that is key. “On its own,” he says, “the fact that there are metal atoms in the bristle worm jaw does not explain its excellent material properties.” 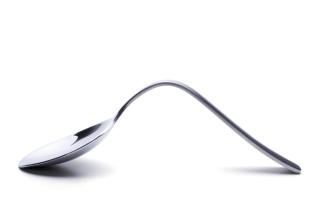 What makes conventional metal so strong is not just its atoms but the interactions between the atoms and the ways in which they slide against each other. The sliding allows for a small amount of elastoplastic deformation when pressure is applied, endowing metals with just enough malleability not to break, crack, or shatter.

Co-author Florian Raible of Max Perutz Labs surmises, “The construction principle that has made bristle worm jaws so successful apparently originated about 500 million years ago.”

Raible explains, “The metal ions are incorporated directly into the protein chains and then ensure that different protein chains are held together.” This leads to the creation of three-dimensional shapes the bristle worm can pack together into a structure that’s just malleable enough to withstand a significant amount of force.

“It is precisely this combination,” says the study’s lead author Luis Zelaya-Lainez, “of high strength and deformability that is normally characteristic of metals.

So the bristle worm jaw is both metal-like and yet not. As Zelaya-Lainez puts it, “Here we are dealing with a completely different material, but interestingly, the metal atoms still provide strength and deformability there, just like in a piece of metal.”

Observing the creation of a metal-like material from biological processes is a bit of a surprise and may suggest new approaches to materials development. “Biology could serve as inspiration here,” says Hellmich, “for completely new kinds of materials. Perhaps it is even possible to produce high-performance materials in a biological way — much more efficiently and environmentally friendly than we manage today.”

There’s an enormous evolutionary advantage for flamingos to stand on one leg, but genetics doesn’t help. Only physics explains why.
Up Next
Health

Don’t be rude to your doctor. It might kill you.