They’re nearly as old as the pyramids of Giza, and far larger, the equivalent in volume of some 4,000 Great Pyramids. They weren’t built by people, though. Two hundred million mounds of dirt — more than 10 cubic kilometers, or 2.6 trillion U.S. gallons, of it — together form a massive structure about the size of Great Britain. It was assembled speck by speck by Syntermes dirus termites. Tiny as they are, these insects have built something so big it can be seen from space.

“This is apparently the world’s most extensive bioengineering effort by a single insect species,” says co-leader of the research team biologist Roy Funch of the Universidade Estadual de Feira de Santana in Brazil. His team’s study was published in Current Biology on November 19. 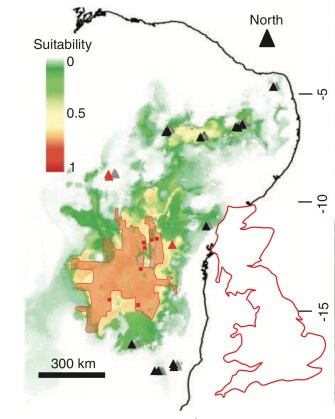 Where the mounds were found

The structure is located in semi-arid northeastern Brazil, largely hidden in thorny-scrub caatinga forests. MAXENT species-distribution modeling software crunched the data on previously catalogued mounds and predicted the 230,000 square-kilometer structure’s existence. This was then confirmed by ground searches and analysis of satellite imagery.

The distribution of the mounds, say the researchers, is not unlike North American mima mounds, South African heuweltjies, and Namibian fairy circles. 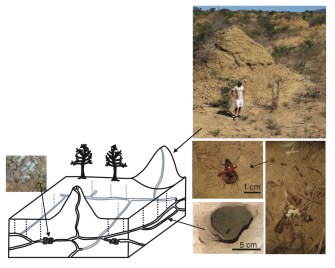 Outline of tunnels system, size of mound compared to human, an S. dirus termite, a tunnel opening, a brooding gallery.

What are the mounds, anyway?

The conical mounds are called murundus by locals, and each one is about twice the height of an adult human, with a diameter of about 35 feet. They’re spaced about 65 feet apart.

Finished mounds have no internal structure to speak of, though piles that are still growing have a single central tunnel of about 10 cm in diameter leading into the ground.

The insects’ vast underground network of tunnels — each tunnel about 10 cm in diameter — and narrow, horizontal galleries filled with beds of dead leaves for brood, are never exposed to the air outside. When termites venture up to the surface and out to get some decaying leaves to eat, they travel in 10–50-member groups. The foraging party emerges via thin, temporary passageways of about 8 mm that are immediately resealed after use.

To learn just how long S. dirus has been at this, the researchers collected soil samples from the centers of 11 mounds. Bathing the samples blue or green light to release ionizing radiation from mineral grains allowed them to roughly deduce the last time they’d been exposed to the sun. Optically-stimulated luminescence analysis produced the 4,000 year estimate. 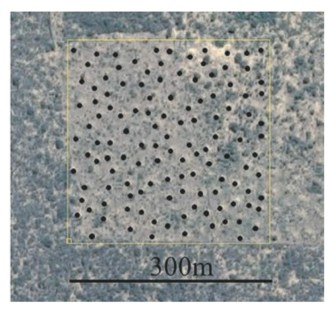 Mounds are marked with black dots on this satellite image.

Entymologist Stephen Martin of University of Salford, the other co-leader of the research, says the group of mounds “represents one of the biggest structures built by a single insect species.” He concludes, “It’s incredible that in this day and age you can find an ‘unknown’ biological wonder of this sheer size and age still existing with the occupants still present.”

Tags
animalsarchitecturediscoveryinsectsintelligencenaturescience
In this article
animalsarchitecturediscoveryinsectsintelligencenaturescience
Related
Neuropsych
Inside the brains of aging dogs
In a citizen science project, thousands of pet dogs are helping scientists to understand what happens to memory and cognition in old age.
The Well
Can we condition ourselves to be heroes?
Neuroscientist Robert Sapolsky on the science of temptation, and the limitations of your brain’s frontal cortex.
▸
6 min
—
with
Robert M Sapolsky
Life
Our antidepressant drugs are affecting animals and ecosystems
A toxicologist explains the impacts of antidepressants on fish — and no, they’re not getting any happier.
Thinking
Visual thinking: How to understand the inner lives of animals
Humans are good visual thinkers, too, but we tend to privilege verbal thinking.
Life
Scientists use CRISPR to insert an alligator gene into a catfish
Disease kills off 40% of farmed catfish. This gene protects them.
Up Next
Neuropsych
What do psychopaths and creatives have in common?
As it turns out, being just enough of a psychopath can do wonders for your creative career.