The Worst Song in the World: Music & Evolution (And a Challenge to Readers) 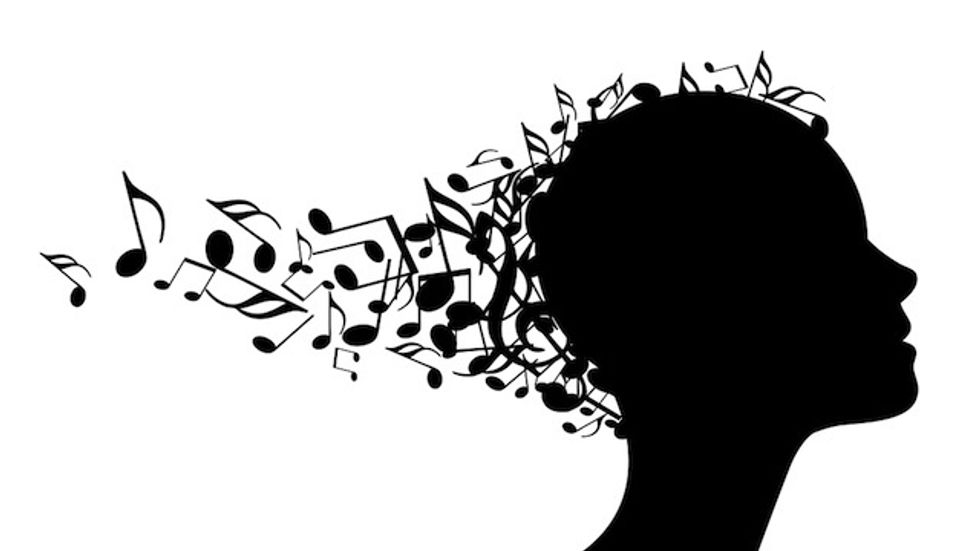 Several years ago Vitaly Komar and Alexander Melamid teamed with violinist, composer and neuroscientist Dave Soldier to explore popular music preferences in the United States. They determined what music people enjoyed or disliked based on a series of questionnaires and used the data to profile “the most unwanted song” and “the most wanted song” in America. They found that the most unwanted song, “veers wildly between loud and quiet sections, between fast and slow tempos, and features timbres of extremely high and low pitch, with each dichotomy presented in abrupt transition.” In contrast, the most wanted song

Soldier recruited professional musicians to compose songs based on the results from the questionnaires. (You can listen to both here; ironically, the most wanted song is horrible.) The project is slightly tongue-in-check yet it raises a question that some evolutionary psychologists are exploring: Is music an evolutionary adaptation and, consequently, do humans share music preferences regardless of culture as a result?

Sometime in the beginning of the 20th century modernist composers partially, albeit unintentionally, answered this question. For the modernist the aesthetic mind was a blank slate and with enough time and exposure people will come to enjoy virtually anything. Arnold Schoenberg, a pioneer in modernist music, infamously prophesized that one day paperboys will whistle atonal and dissonant tunes during their routes.

Schoenberg turned out to be wrong and in the last few decades the modernist perspective of the mind has crumbled. The human brain is prepackaged with a series of innate preferences widespread, from culture to culture. In terms of music we prefer repetition to randomness, consonance to dissonance, tonality to atonality, and predictability to unexpectedness. Differences in music exist around the world, but like food, there are several essential ingredients the brain is programmed to pay special attention to. Contrary to the modernist, what’s pleasurable to the ear is not arbitrary.

How did music – and preferences for it – evolve in the first place? The modernist will argue that the only evolved aspects of music are physical auditory limitations (e.g., the fact that the auditory system can only process certain frequencies). A few decades of research gives us more fruitful explanations. A common theory of musical evolution is that music is all about getting the girls. According to this theory Jagger and Lennon were not necessarily motivated to push aesthetic boundaries or sell records but spread their genes. As the evolutionary psychologist Geoffrey Miller quips, if a car drives by on a city street with very loud music pouring out of rolled down windows and expensive speakers, is there any question about the gender of the driver?

An experiment (pdf) conducted by Bob Cialdini, Doug Kenrich and Vlad Grizkevicus provides supporting evidence to this line of reasoning. They wondered if creativity in human males is linked to sexual selection and, if so, whether or not reproductive motivations trigger boosts in creative output. In one experiment they asked college students to write a short story about an ambiguous picture (a colorful abstract painting or a cartoon of two men at an outdoor café). Before the students took to the page the researchers put half in a mating mind set by showing them six photos of attractive females and had them indicate which one they most desired as a romantic partner. After making the selection the researchers instructed the undergrads to imagine what they would do on a first date with their new, hypothetical girlfriends. The other half of participants – the control condition – only observed a boring photo of a street with buildings and wrote about ideal weather conditions for walking around and grazing at the buildings.

Cialdini and his researchers analyzed the stories and rated them based on how “creative, original, clever, imaginative, [captivating], funny, entertaining, and charming” they were. They found that the photos of attractive women had a significant effect on creative output. As Kenrick says in his latest book, “[they] really got the men’s creative juices flowing… it’s not that the mating motivated men wrote more, but that what they wrote was judged more clever, imaginative and original.”

The NYU psychologist and author of Guitar Zero, Gary Marcus, mentions five reasons why sexual selection theory is flawed. First, most physiological traits shaped by sexual selection are dimorphic, yet women are just as capable musicians as men. Second, most musicians are passionate about music just for the sake of it. Third, it is only recently that eminent musicians receive celebrity treatment. During nearly all of human evolution few performers became internationally renowned. Fourth, sexual selection suggests that evolution targeted a specific music module in the brain. Unfortunately, there is no evidence that such a cognitive space exists. Finally, the sexual selection theory is musically naïve in that it treats all music equal: no one genre is universally pleasing and no one song is universally praised. In sum, evolutionary theories of music are, at this point in time, insightful but not necessarily persuasive. Steven Pinker argues that creating art is actually counter-productive in the context of reproduction and survival. We were better off burning calories on finding food, securing shelters and ensuring the well-being of the community than making music.

To the contrary, in What is Art For? and Homo Aestheticus the anthropologist Ellen Dissanayake posits that art is not a by-product or the result of sexual selection but the product of natural selection and that it contains several clear evolutionary purposes. She gives three reasons why this might be true: art is ubiquitous, pleasurable for the creator and the viewer, and it is effortful and humans rarely exert effort without an adaptive rationale. These are all true but the question is if they are evidence for music as a product natural selection. In a recently published paper Marcus provides a few objections:

In my judgment, the evidence that music is a product of natural selection is relatively weak. A variety of adaptive pressures have been proposed, for example, for social cohesion, communication, or conﬂict reduction, but aside from items such as a bone ﬂute dated to approximately 35,000 years ago little direct evidence for music exists, archaeological or otherwise, until sometime after most scholars believe language evolved and although music is ubiquitous across cultures, many individuals prosper without being able to carry a tune; language impairments, by contrast, are far rarer.

Later on in the paper he concludes that,

“[M]usicality should be seen not as a direct target of selection, but rather as something that the human mind can—and often does, across a broad range of cultures—naturally acquire, given a range of other mechanisms that were more directly selected for.”

With this in mind, go back to Komar, Melamid and Soldier’s project. Their project indirectly asks if we can make objective judgments about music. Is there such thing as “the most unwanted song” in America? What about “the most wanted song?” What we say that one song is “better” than another? According to Schoenberg the answer is no. Since “good” and “bad” are merely social constructions, what we call “good” and “bad” music is a function of exposure. The research outlined here suggests that taste in music is the result of how the brain is organized; it follows that music preferences, despite culture and exposure, maintain a certain degree of universality.

Can we conclude that objective answers to music questions exist? I rarely hear this argument. In a few weeks of research I’ve only come across one text that makes a case for objectivity in music. It comes from the composer John Winsor. His book, Breaking the Sound Barrier: An Argument for Mainstream Literary Music, argues that, “some pieces of music are better than others, [even though] people consider such qualitative judgment in the arts to be purely subjective.” (The book is available for free here.)

As such I issue a challenge to readers: If you minions find any material that argues that objective answers to music questions exist please send it my way. I’m preparing an essay on the subject and would gush over any helpful ideas. (my email here)