Art and Sacredness: A Hostile Relationship

If art is designed to provoke the passions, it does not confine itself to the pleasant ones. 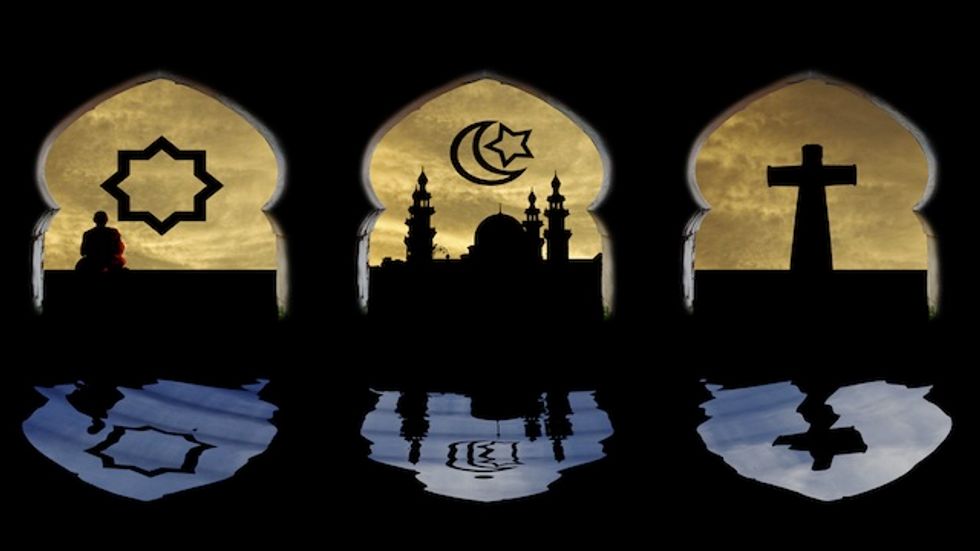 A few weeks ago Glenn Beck put a President Obama bobblehead in a mason jar filled with yellow liquid euphemistically described as “warm.” Days earlier, a college gallery in Boston displayed a controversial painting by Michael D’Antuono that depicts President Obama as a crucified Christ figure. D’Antuono’s painting was slated to go on display in New York City’s Union Square in 2009, but protests from Christian groups prevented it. Beck defended D’Antuono’s freedom of expression and reminded viewers that offensive art – even a bobblehead of President Obama in a jar of urine – does not trump Constitutional rights.

Beck’s art project, titled Obama in Pee Pee, is homage to Andres Serrano’s Piss Christ, a photograph of a crucified Christ figure in a jar of Serrano’s urine. Serrano’s 1987 photograph was predictably controversial. It sparked debates about where US public arts funding should go. On Palm Sunday in 2011, French Catholic fundamentalists smashed it with hammers as part of an “anti-blasphemy campaign.” Last September, a small group of Catholics protested outside the Edward Tyler Nahem Gallery when the gallery displayed it.

The history of art is scattered with moments of hostility. The French rioted when Stravinsky debuted the The Rite. Michelangelo’s depiction of nude figures in The Sistine Chapel outraged the Italian cardinal Oliviero Carafo, who pushed a censorship campaign to remove the frescos. Picasso experienced similar criticisms. If art is designed to provoke the passions, it does not confine itself to the pleasant ones.

In 2008, psychologists Jessica Cooper and Paul Silvia at the University of North Carolina conducted an experiment to measure the relationship between controversial contemporary photography and anger, disgust and rejection. In the first experiment 80 undergrads viewed 14 full-color photographs. Some were mundane, but others, including Serrano’s Piss Christ and a Robert Mapplethorpe photo, were not. The undergrads used a 1-7 point scale to answer questions about disgust (I find this picture disgusting), anger (this picture makes me angry) and rejection (should this be allowed at the Weatherspoon Art Museum?*). Cooper and Silvia found, as predicted, that the more anger and disgust the participants felt the more they rejected the provocative photos.

The second experiment was identical to the first but with a twist. A brand new group of participants (78 undergrads) viewed eight photos. Again, some were mundane and a few were provocative. This time the researchers asked the participants if they would like a postcard of Piss Christ sent to them as a thank you. Cooper and Silvia found that anger and disgust influenced the probability of reject – even though many participants who were not angry rejected it.

Cooper and Silvia’s study reminds me of Jonathan Haidt’s research on sacredness. Haidt, a social psychologist at NYU, argues that sacredness applies to objects (a holy book), places (Mecca), people (Jesus, Muhammad) and principles (E pluribus unum). Sacredness is like social glue; it binds individuals into moral communities. However, once the community deems something sacred, devotees can no longer think clearly about it, hence Haidt’s maxim that sacredness binds and blinds.** And because sacredness is linked to disgust – both literally and figuratively – Catholics find Piss Christ not just sacrilegious but impure as well.

With perhaps the exception of heretics and apostates, artists suffer invariably from dogmatic regulations surrounding the depiction of sacred objects imposed by organized religion. If change and innovation is central to art, regulating the visual world is an automatic bane on the artists’ creative output. In his magnum opus, The Story of Art, Ernst Gombrich outlines one example of how censorship affects creativity and innovation in art.

The proper purpose of art in churches proved of immense importance for the whole history in Europe. For it was one of the principal issues on which the Eastern, Greek-speaking parts of the Roman Empire, whose capital was Byzantium or Constantinople, refused to accept the lead of the Latin Pope. One part was against all images of a religious nature. They were called iconoclasts or smashers… The Eastern Church, therefore, could no longer allow the artist to follow his fancy in these works. Surely it was not any beautiful painting of a mother with her child that could be accepted as the true sacred image or ‘icon’ of the Mother of God, but only types hallowed by an age-old tradition… The stress on tradition, and the necessity of keeping to certain permitted ways of representing Christ or the Holy Virgin, made it difficult for Byzantine artists to develop their personal gifts.

Early Islamic artists experienced even harsher regulations, some of which still exist today.

The religion of the Mohammedan conquerors of Persia, Mesopotamia, Egypt, North Africa and Spain, was even more rigorous in this matter than Christianity had been. The making of images was forbidden… Later sects among the Mohammedans were less strict in their interpretation of the ban on images. They did allow the paintings of figures and illustrations as long as they had no connexion with religion.

Is it a surprise that participants in Cooper and Silvia’s study who were more ring-wing tended to reject the provocative photos more than participants who ranked higher on measurements of curiosity and interest in art?

Non-believers might have trouble relating given sacredness’ tight relationship to religion. But what’s sacred is not necessarily religious. If you’re a secular liberal, think about urinating on the UN declaration of human rights. Sacredness pervades everybody, even staunch secularists and atheists. The only difference with religion-based sacredness is that rules surrounding it are, in general, less tolerant and flexible. This is why artists are usually happier living in secular democratic societies that value free speech. It’s not a puzzle why Saudi Arabia is not a hub for artistic innovation, or why China discriminates Ai WeiWei and his art. If art is an expression, it only flourishes when people have the freedom to express themselves.

It is with this in mind that I appreciate Beck’s defense of D’Antuono. Beck’s obsession with the liberation party and traditional American values is strange – his theatrics are stranger – but, as an American, I agree that the Constitution is a sacred object; I would not feel comfortable putting it in a jar of my urine. But if Haidt is correct that we lose the ability to think clearly once we declare something sacred, then maybe the role of the artist is to highlight our delusions. In this regard, George Braque was right, art is meant to disturb.

* Is the art museum at UNC

** According to Haidt, many other moral foundations bind and blind. Not just sacredness.