A good friend of mine loathes Instagram. He disdains the posturing, the attitude, the constant drive for an illusion of success. During a recent conversation, he championed the humility displayed on TikTok. While I don’t believe Instagram is all ego—educational feeds like Squat University and reality checks like Nature is Metal make the app worthwhile—I understood his larger point: TikTok actually feels like social media while Instagram is used more like a pedestal.

Not that TikTok users don’t care about success—they are human and humans are prone to crave acceptance, thumbs up, hearts, or by any other medium. There are plenty of views and likes on TikTok to get caught up in.

How we measure success, however, is an individual matter. For one author that means selling 100,000 books; for another, the mere completion of a text is enough. Some artists cater by writing on topics that have already proven to be big sellers while others break boundaries. If people want to come along for the ride, so be it.

The avant-garde choreographer, Merce Cummingham, was in the latter camp, says filmmaker Alla Kovgan, who directed the new documentary, Cunningham. Rather than require perfection, Cunningham allowed his dancers to experiment and, importantly, fail on stage. It is only by pushing the boundaries of what’s possible that you learn. Cunningham was focused on the process. He created dances, Kovgan says, and allowed audiences to find him.

That’s what Kovgan set out to capture when she began working on the documentary in 2011. The Moscow-born, award-winning director of “Nora” was taken by how Cunningham used space and time in his works. Capturing that on film was a challenge given how big (in terms of actual movement) every production was, yet the film beautifully captures the essence of this legendary dancer’s contribution to the art. Even if you’ve never heard of Cunningham, you’ll be taken by Kovgan’s exceptional storytelling.

Derek: What made you want to feature Merce Cunningham’s work?

Alla: I never wanted to make a movie about Merce Cunningham. He’s the kind of choreographer where you have 16 people going in different directions and you cannot make a single shot. I first learned about his work through cinema because I watched a 1965 piece he made. It was very interesting because it had multiple screens, dances, and a lot of electronic music and a lot of feedback loops. And I was like, “Oh my God, who is this person?”

I thought making a film about him would be impossible, but then 3D came out in a new way. I felt like there was a potential between 3D and dance. It all coincided with the closure of the Merce Cunningham Dance Company. It was in 2011 and the company shut down on December 31. I remember going to the last performance and it struck me that 3D and Merce can make a good fit. 3D works really well with space and Merce was very much concerned with working in space.

Derek: There is a lot of archival footage, with him being interested in technology throughout his career. You do a lot of work with split screens and the layering of film. Was that an artistic decision?

Alla: I was particularly struck by the period between 1942 and 1972—that was the celluloid era. People shot eight-millimeter, 16-millimeter, and 35-millimeter footage. I was impressed how much there was—not only footage but also photographs. Seventy photographers photographed Merce between ’42 and ’72. This is because he just said yes to things. He was obsessed with being captured and preserved.

When we got to make the movie, one of the biggest challenges was bringing the material that we shot today in 3D together with the archival material. We were thinking that the archival material should not be just single shots, it should be a collage of elements in space. Although the materials would stay in 2D, they’re all placed in different planes. Each kind of archival moment is more like a three-dimensional block that’s filled in with elements. Imagine how much more work it was to actually arrange and choreograph and choose those elements within the space. 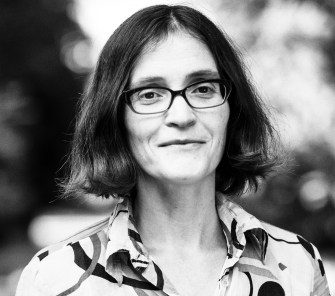 Derek: Besides ballet, what other styles influenced Merce?

Alla: I’m not a Merce expert, but he took ballet and modern dance and tried to make a new dancer. Of course, he did a lot of yoga, and he has seen a lot of different dances, from Native American to Indian. He danced with Martha Graham for some time and she was a big influence. He developed a technique to not only be influenced by different styles and distill things for himself, but he also had to create a system that would train the bodies of the dancers. That’s a tall order.

Derek: How much freedom did the dancers have within his instruction to express themselves?

Alla: All the freedom they could have. He wanted them to do the movement, and then, at least in my impression, is that he was quite open. He was quite interested in our flaws as dancers. Of course, things would change, depending on who was doing it. He was looking for individuals. They were not just realizing his vision, they were manifesting their personality through his work. It was a very stable company. People stuck around, sometimes for decades, which is a long time within the contemporary dance world. It wasn’t easy; you had to accept not knowing and have a sense of uncertainty. But if you think about it, are we really certain about anything?

Derek: I try not to be certain about anything.

Derek: What struck you most about Merce’s work during the period you cover in the film?

Alla: There was a kind of spirit that we’re missing, or maybe it’s only possible when you’re young, and maybe it’s only possible in some period and place. New York was definitely that place where everything was possible. You could actually have a loft with $20 a month and you could just to get together and do things because you just wanted to do them and be kind of poor. It was very romantic in a way. At the same time, I was incredibly struck by Merce’s humanity and perseverance. He didn’t have anything. He didn’t have audience support, money, press, nothing. He persevered for two to three decades in that condition. His success comes when he’s 45 years old. 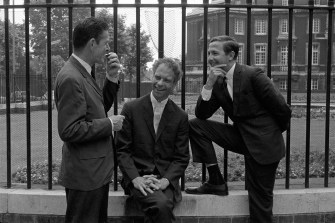 Derek: How did his dancers and friends feel about him as a human and as an artist?

Derek: Speaking of pain, there were moments in your film that reminded of the dancer, Sergei Polunin, trying to evolve a dance form but getting stuck by convention in the process. How did Merce feel when audiences didn’t take to him? There was a moment in the film where they talked about having tomatoes thrown at them at the end of a performance.

Alla: The reason he survived is because he had friends, and the number of those friends grew over years. Merce created dances and then waited for people to be able to see them. It took a while for people to understand what he was doing, and to understand you have to have a background. The reason Europeans got into this is because they have backgrounds; they take their kids to see modern dance since the age of five.

Because Merce had this community and friends, he always felt supported. That’s one thing. But criticism was also part of the deal. He accepted what that was. He was not oriented for this kind of success, because everything now is measured by success. He was willing to take a risk. He was willing to gamble. He was willing to not be successful because when you work like that, when you have a choreographer making choreography, musicians making music, and visual artists making things, and they meet at the premiere, what is the calculated success?

They would always say sometimes things worked and sometimes they didn’t, and they were willing to accept those times when things didn’t work. You also have allow situations where things don’t work. It affects you dramatically.

Tags
dancefilmfilmmakingmusicperformance artstorytelling
In this article
dancefilmfilmmakingmusicperformance artstorytelling
Related
High Culture
5 great (and underrated) songs about cities
Most popular songs are about love and heartache. But some great songs — albeit underrated and perhaps a bit weird — are about the cities we love.
High Culture
“Global Jukebox” database uncovers secrets from the history of music
We don’t know when or how music was originally invented, but we can now track its evolution across space and time thanks to the Global Jukebox.
The Past
The hobbies of 5 great geniuses
Albert Einstein played a mean violin.
Neuropsych
Here’s why you should put your “calling” on hold to pursue a more “sensible” career
When your passion becomes your day job, sometimes the day job becomes a chore.
High Culture
How Bob Dylan used the ancient practice of “imitatio” to write songs
Because Dylan “samples and digests” songs from the past, he has been accused of plagiarism. But imitatio isn’t the same.
Up Next
Neuropsych
​Is psychopathy untreatable? Why researchers are starting to change their minds.
A growing body of research suggests that the “clinical pessimism” over treating psychopathy is unwarranted.