Despite its cheerful overtones today, Christmas during the Victorian era was the time to tell tales more chilling than icy winter nights and send morbid holiday cards. 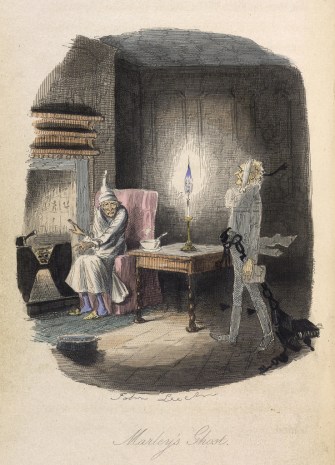 As the carousel of endless holiday songs pervades the backgrounds of our lives this time of year, you might have noticed a peculiar line that goes: “There’ll be scary ghost stories and tales of the glories of Christmases long, long ago.” It’s heard in Andy Williams’s 1963 holiday classic “The Most Wonderful Time of the Year,” as the singer lists off festive traditions associated with the holiday.

As it turns out, gathering around a fire to share ghost stories was actually a beloved Christmas tradition in the late 1800s into the early 1900s. Frigid temperatures and long nights were considered the best conditions to share grim stories. “Nothing satisfies us on Christmas Eve but to hear each other tell authentic anecdotes about specters,” wrote British travel writer and humorist Jerome K. Jerome in the introduction of his 1891 anthology of Christmas ghost stories, “Told After Supper.”

The most famous example is, of course, Charles Dickens’ 1843 tale, “A Christmas Carol.” In the holiday classic, originally titled “A Ghost Story of Christmas,” four phantoms visit the curmudgeon Ebenezer Scrooge to scare his greedy soul straight. The supernatural literary hit was inextricably bound to the heritage of holiday ghost stories in Britain. American author Henry James cemented the eerie tradition into U.S. culture when he published his story “The Turn of the Screw” in 1898. The novella about a chilling series of supposedly ghostly events that befall a young governess begins with men gathered around a fire sharing spooky stories on Christmas Eve. The American goth legend Edgar Allan Poe, also set his unsettling poem “The Raven” in “the bleak” month of December.

The tradition lingered until the early 20th century with magazines regularly running ghost stories in their Christmas issues. 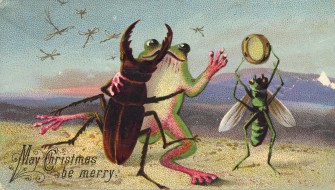 This old tradition offers context to some of the bizarre Victorian Christmas cards. Among the dark, outlandish designs included macabre images like a murderous frog stabbing and looting a fellow amphibian, Saint Nicholas peeping through windows and stuffing children into his gift sack, giant waltzing insects, and dead robins. A far cry from today’s festive, saccharine cards.

Victorians wanted their cards to serve as shocking conversation starters, and some of the morbidly outlandish designs were influenced by folklore customs. For instance, in English myths robins and wrens were considered sacred species. According to John Grossman, author of “Christmas Curiosities: Old, Dark and Forgotten Christmas”, images of dead birds might have been used “to elicit Victorian sympathy and may reference common stories of poor children freezing to death at Christmas.”

The legend of Santa Clause was much more sinister during the Victorian era as well. An English legend had him paired up with the devil in a good-cop / bad-cop duo to figure out which children had been naughty, which had been nice, and how their fates should be carried out. The Devil, sometimes guised as Krampus, kidnapped and beat disobedient children while Santa was often depicted in Christmas cards slinking around and spying on children through windows.

So, where exactly did these supernatural elements come from?

Historically, December 25 actually has had a closer link to pre-Christian festivals that honored the winter solstice than with Christianity. Mistletoe, holly berries, wreaths, and yule logs, for instance, are all pagan symbols. (Puritan leaders even tried to abolish Christmas at one point because there was no biblical basis for celebrating the day.) Celebrations like Yuletide symbolically celebrate “death” of light and the longest night of the year. For this reason, the date was considered to be the most haunted as the veil between the realms of the living and the dead was gossamer-sheer.

Perhaps it’s also because, without the luxury of modern medicine and health care, the chilly breath of death always felt a bit close during the winter, a season particularly fraught with illness. Conditions were ripe for imaginations to run wild with what might await beyond the grave. In fact, in Shakespeare’s 1611 play The Winter’s Tale, Mamillius proclaims, “A sad tale’s best for winter. I have one / of sprites and goblins.”

Later, thanks to traditions adopted by Irish and Scottish immigrants, Halloween was embraced in the United States and designated the official spooky season while Christmas was purified. But perhaps this year –– after wrapping presents, snacking on holiday cookies, and sipping on mulled wine –– you might consider inviting loved ones to gather round the fire to share ghost stories or summon specters for a Christmas Eve seance. You know, in the spirit of tradition.

This hologrammatic schematic of the Death Star shows the inner workings of the imagined battle station, complete with the electronic components of the large dish that detonates the planet-destroying weapon […]