I began noticing a new beverage in Los Angeles. The first thing you notice is the cheap wrapping, as if directly printed at home and pasted onto the bottle. The sparse print leaves room for plenty of white space. The first six ingredients of one particular flavor are all juice or sugar: blackberry, ginger, blueberry, and lemon juices, along with erythritol (sugar alcohol) and agave. Stevia is featured later on. The final ingredient is the selling point: Hemp CBD.

Or CBD water, which makes it this year’s additive du jour. I’ve seen this drink sold in the same case as a sugar-rich CBD-infused coffee drink that sells for a dollar less and six fewer ounces. CBD is as trendy as its forebears, antioxidants, keto supplements, and açaí rolled into one, the superfood of superfoods. And you will pay a premium for it.

I’ve been a marijuana smoker for 25 years, well before I knew about the endocannabinoid system. I was clueless that our central and peripheral nervous systems—and by “our,” I mean mammals—were tailor-made to accept cannabinoids (including the most famous, cannabidiol, aka CBD), and that these systems play an essential role in immune system functioning, pain management, and regulation of appetite. I didn’t know it for a long time, but I’ve certainly felt it.

Point being, I’m a fan. Cannabis helped me deal with cancer and chemotherapy, pain management through multiple surgeries, and chronic anxiety disorder. Marijuana helped keep me off Xanax and opioids. Despite that fact that I was among those who nodded and winked when getting my California medical license, I’m skeptical of the hype. The collapsing dominoes that led to legalization have brought with them a gold rush of CBD-infused products and all the ridiculous claims that come along with it.

When Coca Cola is jumping aboard, you know it’s going to get weird.

I’m not the only one who’s suspicious. As Dan Nosowitz writes at Vox, this trend is the result of two collisions: widespread marijuana legalization and the growing anxiety economy. By 2020, CBD products could reach a billion dollars in sales, making it a potential goldmine for speculators.

There are benefits to CBD, at least according to some reports. As I wrote last month:

Yet CBD is enforced as a supplement, as unregulated by the FDA as most homeopathic products and “natural remedies” that make up a lion’s share of the $49 billion herbal supplement industry. According to Nosowitz, the FDA actually regulates CBD as an active ingredient, meaning you shouldn’t be able to just throw it into a cup of coffee and double the price, but what sort of regulations are any federal agency even enforcing these days? Nosowitz continues:

CBD is about as poorly regulated and understood as a product this popular can possibly be. It’s not accurate to say that CBD, as a whole, is bullshit. From a medical perspective, it’s promising; recreationally, it’s interesting. But that doesn’t mean the stuff you’re buying works. 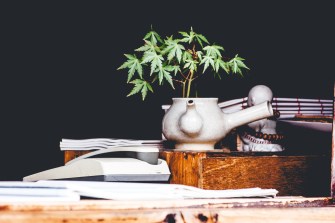 The burgeoning CBD oil industry, for example, faces a serious problem: science. Not that that stops any holistic company. Topical application or ingestion of CBD are much less effective means than inhaling. Sipping it from your hyped-up vitamin water means most of the CBD will just bind to other fat in your body and never reach your brain. Smoking, as Nosowitz writes, “bypasses the digestive system.”

Even then, he was only able to discover one study detailing the bioavailability of inhaled CBD and none on topical lotions. Even more problematic is dosage. One study discovered that the only amount of CBD that made a noticeable difference in anxiety levels was 300 mg. The standard dose in most products is 20 mg. One coffee shop Nosowitz highlights adds 5 mg to their $9 coffee. So really, you just paid $9 for… coffee.

More studies are being conducted on CBD and, hopefully, the 112 other cannabinoids found in the marijuana plant. Legalization and destigmatization will hasten that process. We should welcome this progress so that we can separate the wheat from the chaff—the flower from the stem—and make smart decisions about how to apply this plant medicine. Then we can stand on firmer ground when denouncing market manipulators bucking a trend and put our money into products that work as intended.

In my refrigerator sits a $42 bottle of CBD oil we bought for our cats when we were integrating our newest member with our overly territorial Maine Coon. At 300 mg per bottle, it would have taken the lion’s share to quell any anxiety—cats being smaller than humans would likely not require the same dose. Still, the recommended dose did nothing to stop their anxiety.

Something else did: Prozac. It’s not a long-term strategy (as such anti-anxiety medications were never designed to be). Over a three-month period it’s worked wonders; we’re now tapering them off. That’s the thing about clinical studies: sometimes they’re effective. It’s a message I hope CBD hucksters take the time to learn.

Tags
biologyhealthhuman bodyillnessmarijuanamedicinescience
In this article
biologyhealthhuman bodyillnessmarijuanamedicinescience
Related
Health
New blood types are often discovered following medical disasters
New blood types are regularly discovered by an unusual absence or an unusual presence — both of which can result in tragedy.
Neuropsych
How you breathe affects your brain
Your breathing rhythm influences a wide range of behaviors, cognition, and emotion.
Health
COVID, RSV and the flu: A case of viral interference?
Viruses, it turns out, can block one another and take turns to dominate.
Health
Chantix, Trulicity, Xeljanz, and most drugs advertised on TV are of “low therapeutic value”
Close to 70% of drugs advertised on TV offer little to no benefit over other cheaper drugs.
Neuropsych
Shopping with your nose: How body odors influence your buying behavior
Sniffing out a deal.
Up Next
The Present
90% of Americans would take a pay cut for a more meaningful job
Harvard Business Review recently published a report showing how Americans prioritize meaning in the workplace.