Sleeping more improves people’s diets, especially when it comes to cutting down sugar. These are the results of a study published in The American Journal of Clinical Nutrition.

Other research has also identified links between sleep, health, and obesity, with diet as a mediating factor. After performing a meta-analysis of previous intervention studies, the researchers found that partial sleep deprivation caused a 385-kcal increase in energy intake with no compensatory effects on energy expenditure. If sleep deprivation is sustained, this net positive energy balance may easily lead to weight gain and eventually obesity.

Studies have also shown that two weeks of sleep deprivation increases the consumption of excess calories particularly from energy-dense, high-carbohydrate snacks. The current study reports similar findings but is unique because it is the first to test healthy adults under free living conditions for the duration of four weeks.

The scientists recruited 42 participants who are habitual short sleepers and put them in two groups. The control group maintained their sleep habits, while the intervention group went through a personalized sleep consultation session with the goal of extending time in bed by 1-1.5 hours per night. 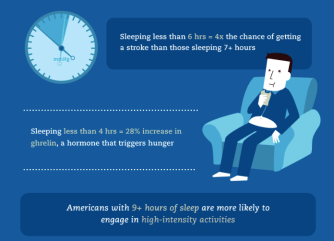 The consultation was conducted with a health psychologist and focused on improving the participants’ sleep hygiene practices which include avoiding excessive caffeine intake late in the day, avoiding going to bed too full or too hungry, and others that were relevant to the participant’s lifestyle.

The intervention group was also asked to identify barriers to achieving their selected behaviors, and were assisted to create implementation intentions. Implementation intentions are a useful self-regulatory strategy that helps people plan for unexpected challenges in achieving their goals by writing out “if-then” scenarios. In the end, the participants were prescribed a recommended bedtime, which was outlined in a “behavioral contract.”

As a result of the sleep advice, 86 percent of the group increased time spent in bed and half increased their sleep duration (ranging from 52 minutes to nearly 90 minutes). After four weeks, the sleep extension group had reduced their intake of sugar by an average of 11.8 g/day, equating to approximately one-third of the UK dietary guidelines’ daily allowance. There was also a trend towards a reduced fat intake.

There were, however, no significant differences between the two groups when it came to levels of physical activity, energy expenditure, or body weight. It appears that the quality of our sleep affects the overall quality of our diets, with sleep extension leading to a tendency to select foods with lower fat and higher protein contents.

“We hope to investigate this finding further with longer-term studies examining nutrient intake and continued adherence to sleep extension behaviours in more detail, especially in populations at risk of obesity or cardio-vascular disease,” the authors say.

The scientists point out that the sleep extension strategy they used is effective and easy to implement, so sleep hygiene guidelines should be used in public health messages.

Tags
cravingsdietfathealthnutritionsleep hygienestudysugarThe American Journal of Clinical Nutrition
In this article
cravingsdietfathealthnutritionsleep hygienestudysugarThe American Journal of Clinical Nutrition
Related
The bizarre history of exercise explained in 8 minutes
Harvard professor Daniel Lieberman debunks the ‘10,000 steps per day’ myth.
▸
8 min
—
with
Daniel Lieberman
Health
America’s maternal death rate: “This is a national crisis”
Black women are 3x more likely to die giving birth. Here’s one plan to fix that.
▸
7 min
—
with
Michael Dowling
Harvard professor debunks the biggest exercise myths
Exercise culture is crazy. But what you need to do is exceedingly simple.
▸
with
Daniel Lieberman
Mind hack: Revive your focus with this 12-minute exercise
A neuroscientist explains how to master your focus.
▸
7 min
—
with
Amishi Jha
Videos
Are you developing Alzheimer’s?
Only 2% of Alzheimer’s is 100% genetic. The rest is up to your daily habits.
▸
9 min
—
with
Lisa Genova
Up Next
Surprising Science
Top vets reject homeopathic treatment for animals as primary care
The Royal College of Veterinary Surgeons issued a statement to remind its members of their fundamental obligation to science-based medicine and animal welfare.