We know what happens to the bodies of people suffering from type 2 diabetes. Your cells cease to respond to the hormone insulin, which is tasked with carrying sugar out of your bloodstream. Your blood sugar levels rise, which causes your pancreas to produce more and more insulin—over time a futile effort. Your pancreas eventually becomes exhausted; your blood sugar remains permanently elevated. The cascade of deleterious health effects ensues, resulting in, if untreated, death.

Sugar is first to mind when contemplating this disease these days, alongside the fact that type 2 diabetes is an avoidable disease. In the three decades following 1975 worldwide rates increased sevenfold. Yet it is not only sugar doing the damage. The accumulation of visceral fat and lack of exercise are also implicated in the onset of diabetes. Over time your chances of heart disease, blindness, and kidney failure increase.

But what is going on in your brain during this process? We know the risk of dementia increases, but why? A new study in the journal Diabetologia addresses this question.

While obesity increases your risk of developing type 2 diabetes, a team led by Dr. Sujung Yoon wanted to know how being overweight affects the brains of those with this form of diabetes. They specifically looked at how the cognitive functions of early-stage patients were affected.

Fifty overweight and fifty normal-weight sufferers between the age of 30 and 60, all of whom had received their diagnosis in the last five years, underwent MRI scans alongside tests of memory, planning, and reaction time over multiple years. The results were stark. As the NY Timesreports:

Compared with the controls, those with Type 2 diabetes had more severe thinning of the cortex and more white matter abnormalities. Overweight people with diabetes had more brain deterioration than diabetic people of normal weight. 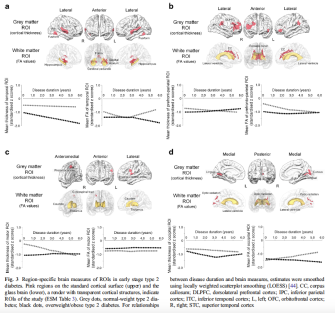 The researchers discovered that cognitive dysfunction may accelerate, and dementia risks may increase in diabetes sufferers. While the exact mechanism for why this is remains unknown, the team writes:

… several metabolic dysfunctions including insulin resistance, poor glycaemic control and inflammation have been suggested to be involved.

While differences in executive function were not statistically significant between the overweight and normal weight groups, the overweight group had a thinner cortex in the temporal and motor regions, along with decline in memory and psychomotor speed. Cortical thinning and disrupted white matter were more prominent in the overweight group, leading researchers to believe the combination of obesity and type 2 diabetes increases the risk of diseases of dementia, including Alzheimer’s.

This problem is especially daunting to those who do not manage their diets. People with abundant visceral fat and fatty livers are at increased risk of developing insulin resistance. Diets that lead to high levels of triglycerides in the blood promote this disease. Interestingly, people with more visceral fat around the abdomen, rather than the butt and thighs, are also at increased risk. The quickest route to storing fat in this region is through the intake of sugars from soda, juices, and other foodstuffs that contain rapidly digestible glucose.

The researchers did note that overweight people without type 2 diabetes were not included in this study, making it difficult to discern what effects diabetes specifically have on cognitive risks in the overweight population. Still, this study shows that obesity creates more neurological problems in sufferers of type 2 diabetes. This fact alone is an important reminder of why weight management is critical in managing this disease.

Unfortunately a number of people do not act until the disease sets in, making such management challenging. As weight loss is possible for those suffering from type 2 diabetes, nutritional counseling alongside exercise should be implemented to help cognitive functioning remain strong.

Black women are 3x more likely to die giving birth. Here’s one plan to fix that.
▸
7 min
—
with
Michael Dowling
The Future

Humans tend to hunker down in our own minds and trust what we already believe to be true. This emotion-based way of thought isn’t often the best way to think about anything, and often leads to gridlock.
▸
with
Barbara Oakley
Up Next
Neuropsych

Why You Don’t (and Can’t) Think Alone

Science (and life) keep hammering nails “into the coffin of the rational individual.” But rationalism and individualism still haunt and systematically mislead—even about where your mind is.