There’s no shortage of disparities between attractive and unattractive people. Studies show that the best-looking among us tend to have an easier time making money, receiving help, avoiding punishment, and being perceived as competent. (Sure, research also suggests beautiful people have shorter relationships, but they also have more sexual partners, and more options for romantic relationships. So call it a wash.)

In the first study, lead author Tobias Greitemeyer found that the participants who were most likely to overestimate their attractiveness were among the least attractive people in the study, based on average ratings. 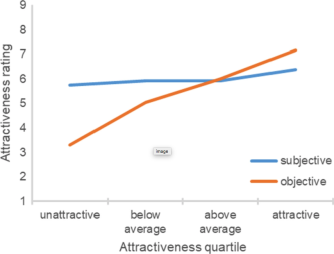 Why do unattractive people overestimate their attractiveness? Could it be because they want to maintain a positive self-image, so they delude themselves? After all, previous research has shown that people tend to discredit or “forget” negative social feedback, which seems to help protect a sense of self-worth.

To find out, Greitemeyer conducted a study that aimed to put participants in a positive, non-defensive mindset before rating attractiveness. He did that by asking participants questions that affirmed parts of their personality that had nothing to do with physical appearance, such as: “Have you ever been generous and selfless to another person?” Yet, this didn’t change how participants rated themselves, suggesting that unattractive people aren’t overestimating their looks out of defensiveness.

The studies kept yielding the same finding: unattractive people overestimate their attractiveness. Does that bias sound familiar? If so, you might be thinking of the Dunning-Kruger effect, which describes how incompetent people tend to overestimate their own competency. Why? Because they lack the metacognitive skills needed to discern their own shortcomings.

In short, it remains a mystery exactly why unattractive people overestimate their looks. Greitemeyer concluded that, while most people are decent at judging the attractiveness of others, “it appears that those who are unattractive do not know that they are unattractive.”

“The finding that unattractive participants selected unattractive stimulus persons with whom they would compare their attractiveness to suggests that they may have an inkling that they are less attractive than they want it to be,” Greitemeyer wrote.

There are many things in life that cannot be improved with greater effort. Sometimes, life requires that you step back.
Health

It’s the clitoris, stupid!
The Past

Black cat crossed your path?
The Past

Were Hitler’s SS henchmen willing executioners fueled by racial propaganda or mindless servants vying for promotions?
Up Next
Neuropsych

Why more couples are choosing to live apart