Responding to pandemics like COVID-19, the infamous coronavirus, is one good reason to have governments. The need for effective organization and quick spread of relevant information is paramount to stopping diseases like this in their tracks.

The 20th century saw a number of infectious illnesses testing the U.S. government. The Spanish Flu of 1918, called by doctors “the greatest medical holocaust in history,” ravaged the world to an unprecedented extent, killing from 50 to 100 million people. This is more than how many died during the Black Death, the catastrophic plague that killed 60% of Europe’s population in the 14th century.

Likely originating in the unsanitary trenches of World War I, in the training camps along the French border of the Western Front, the Spanish Flu was brought home by soldiers. The illness decimated the population in an even worse way than the war itself. The Oakland Municipal Auditorium used as a temporary hospital with volunteer nurses from the American Red Cross tending the sick. Oakland, California, 1918.

One commonality between COVID-19 and the Spanish flu is that people who died from them often did so because of pneumonia. It can wreak havoc on the immune system, weak from the virus, as reports BBC. It should be noted that the death rate from the coronavirus is currently lower than from the Spanish flu but if it continues to hover above 3%, the new virus can become a catastrophic killer. Most at risk are older people and those with pre-existing conditions. They would be more likely to develop pneumonia-causing infections.

The response by the U.S. government to the Spanish flu bears many lessons for the current situation. The initial instinct by the American leaders was to downplay the extent of the epidemic. In Europe, there was “outright censorship” on the topic of the flu, as warring nations jockeyed to get an advantage over the other sides, according to historian John M. Barry. ” There was intense pressure not to say anything negative,” he pointed out in an interview with the Washington Post. When the flu started to spread in the U.S. in 1918, the government and the media tried to “keep morale up” by focusing only on positive stories about the war and portrayed the flu as an “ordinary influenza by another name,” as it was called by a top health official. 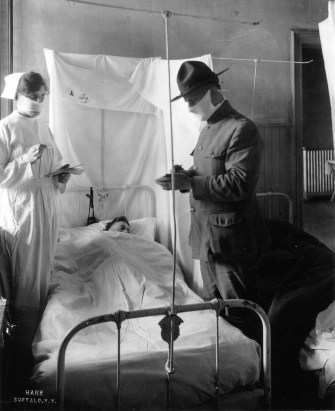 Spanish Influenza in Army Hospitals. Fort Porter, New York, 1918. Patients’ beds are purposefully reversed, so breath of one patient will not be directed toward the face of another.

Of course, it wasn’t just another flu. And downplaying dangers can come back to haunt you. Barry mentions the example of a parade in Philadelphia, held in the fall of 1918 in honor of returning soldiers. While medical officials were staunchly against what was supposed to be the largest parade in the history of the city, the media did not report the concerns. As a result, the parade was held and in two days the Spanish flu spread throughout the city. Schools were closed, gatherings were banned, the dead started to pile up in the streets. Over 12,500 residents died, reported the Philadelphia Inquirer. In the U.S. overall, 675,000 lost their lives to the disease. Even President Wilson got it.

In the 1980s, as the HIV/AIDS epidemic ravaged the world, the administration of President Reagan did not take a proactive approach either. In fact, they first treated it almost like a joke. A documentary short shared by Vanity Fair revealed audio of a 1982 press conferences by Reagan’s press secretary Larry Speakes, who was joking about the AIDS epidemic with the media, clearly not taking it as a serious public health issue while thousands were dying. When asked if the President was concerned, Speakes stated “I haven’t heard him express concern”.

In 1984, the Health and Human Services Secretary Margaret Heckler announced that a virus causing AIDS was discovered and promised a vaccine in two years (which of course didn’t come to pass). Only in 1985, Reagan himself finally uttered the word “AIDS” in public. That’s when more than 12,000 Americans had died as the virus quickly moved through hemophiliac populations and injection drug users, as reported NBC News.

Considering what often feels like inadequate response, does the government have a playbook for dealing with pandemics? It publishes guidelines for pandemic influenza (updated in 2017) as well as strategy documents like the 2019 U.S. government and Global Health Security policy document. The flu document outlines actions CDC recommends based on the lessons learned from previous outbreaks like the H1N1 or the 2009’s swine flu. The actions are presented for three categories: personal, community, and environmental. Closing schools, rearranging their interior design to promote less interaction, or increasing distance learning is one set of effective practices proposed by the government agency. The goal is to organize a framework of response that would reduce further spread of a new outbreak.

The Global Health Security report looks on the issue at the overall level, outlining various steps that range from investment into overseas disease surveillance efforts, to stockpiling medicines and strengthening local containment efforts.

While there are plans in existence, how well does the government follow its plans in practicality?

The Trump administration has been shown to be making light of the situation, not organizing enough coronavirus tests (leading to chaos at hospitals), and not screening passengers at ports of entry. As the New York Times reports, the administration also dismantled the previous team for dealing with global health emergencies, but didn’t replace it with new appointees.

It remains to be seen how what seem to be usual government missteps will affect the situation. But the stakes cannot be higher, with a recent Australian study predicting 15 millions dead from the coronavirus, and a global economic impact in the trillions.

A doctor once joked that statins will be added to the water supply. Humor aside, the data shows that statins really are a “wonder drug.”
Strange Maps

Pseudoscience is science’s shadow.
Up Next
Smart Skills

Why lifelong learning is the international passport to success

The university model needs to evolve.