Over the past decade, marathons have become rather trendy in the fitness community. The numbers back it up. For example, in 2018, 456,700 Americans completed the full 26.2 mile race, an 11 percent increase in participation from 2008.

We’ve come to lionize marathoners as embodying peak physical fitness, what with their typically lean physiques, low resting heart rates, and herculean discipline. But what the training and race does to your body isn’t glamorous, and it certainly isn’t the epitome of health. Here are four reasons to opt for a less masochistic fitness goal this year. 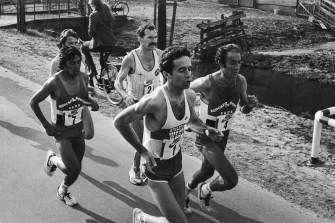 Alberto Salazar, pictured before winning his third New York City Marathon in 1982, later suffered a heart attack at the age of 48.

Some experts are divided over whether or not running the marathon is bad for your cardiac health. But the concern is mostly rooted in fear that discussing the adverse health effects could dissuading people from exercising. To be clear: Running is good for you. In moderation. However, grinding for hours on end at a moderate pace to prepare for a marathon is probably not the best thing for your heart. Studies have shown that extreme endurance sports like marathons and Ironmans can have adverse effects on heart health. When your body is burning through sugar and fat to fuel you for long runs, it releases free radicals that can bind with cholesterol. This process can lead to plaque buildup in the arteries and inflammation. Thus, training for a marathon might increase a person’s risk of heart disease and lead to heart scarring. A person’s chance of going into cardiac arrest even doubles by some estimates during a race, likely because of the stress of racing placing an extra strain on someone’s heart who was already at risk. A 2010 study found that for less fit runners, a marathon damaged the heart for up to three months.

The free radicals that burn through your system when running too much can also damage your cells in a process known as oxidative stress. In a 2016 study on thirty amateur male runners, researchers found that DNA damage correlated positively with running long distances. The increased oxygen intake involved with running marathons, and oxygen supply to tissues that are active during the race and training, result in higher levels of “reactive oxygen species” (ROS). The accumulation of this, in turn, can cause oxidative DNA damage.

The repetitive muscle contractions associated with marathon training and racing can also cause muscular damage. Studies have suggested that competitive endurance events result in an increase of creatine kinase and lactate dehydrogenase. These chemical compounds are indicators of the extent of skeletal muscle cell damage. Research has shown that this muscle damage can be caused not only by the full 26 mile race, but also by 10 km races and 13-mile half marathons.

Running too much, and a marathon is too much for most of us, can cause a spike in your cortisol levels. The hours of running required for marathon training are perceived by the body as constant stress, which causes the adrenal glands to increase the release of the hormone cortisol. This hormone boosts blood sugar levels to provide the body with energy during times of stress, and puts its digestive and reproductive systems on ice until the stressor has been dealt with. Chronically increased cortisol levels comes with some unpleasant side effects, like weight gain, fatigue, increased risk of illness, and out-of-whack menstrual cycles for women.

When it comes to marathons, the danger here is going from a relatively sedentary lifestyle to suddenly putting in a grueling number of miles to train for a 26.2 mile race. This is what freaks your body out and can cause cortisol levels to shoot up. So, if you do insist on training for a marathon, build mileage gradually.

It damages your kidneys

Back in 2017, researchers at Yale found that an alarming 82 percent of marathon participants suffered from a kidney injury that left them unable to filter waste products from the blood. This is known as stage 1 acute kidney injury. Essentially, it means that kidney cells become damaged by the lack of blood flow to the organs during a race and the loss of fluid volume. It sounds (and can literally be) nauseating, but runners’ kidneys typically recover within two days. Yet, it does raise the question of whether completing multiple marathons, and the high mileage training involved, could cause chronic, or even permanent, kidney damage.

But listen, if completing the full 26.2 mile beast of a race is a true ambition of yours, I’m not here to knock it. No one’s living forever. However, if the marathon hype has got you wondering if signing up for a race and spending hours pounding on pavement is a good way to get into shape this year — it really isn’t. Opt for a gentler goal, like running every other day or snowshoeing. You don’t need to punish your body into exhaustion to live a fitter lifestyle.

Tags
dnaextreme sportshealthhuman bodysports
In this article
dnaextreme sportshealthhuman bodysports
Related
Health
When’s the best time to consume caffeine? Hint: Not right after you wake
Get the most out of your coffee.
Health
The scientific highs and lows of cannibinoids
Hundreds of these cannabis-related chemicals now exist, both natural and synthetic, inspiring researchers in search of medical breakthroughs.
Health
How saliva changes the flavor of food
“It’s a liquid, but it’s not just a liquid.”
Health
New blood types are often discovered following medical disasters
New blood types are regularly discovered by an unusual absence or an unusual presence — both of which can result in tragedy.
Neuropsych
How you breathe affects your brain
Your breathing rhythm influences a wide range of behaviors, cognition, and emotion.
Up Next
Strange Maps
The joy of French, in a dozen maps
Isogloss cartography shows diversity, richness, and humour of the French language