According to a new study, the top rap songs in the U.S. are making increasingly frequent references to mental health problems, particularly suicide and depression.

The study, which was published last week in the journal JAMA Pediatrics, was conducted by a team of researchers from the University of North Carolina at Chapel Hill. The team analyzed lyrics from the top 25 most popular rap songs released in the years 1998, 2003, 2008, 2013, and 2018 using data from companies such as Billboard and Nielsen. Artists whose lyrics were examined in the study included Eminem, Drake, Post Malone, Lil’ Wayne, Juice WRLD, Kanye West, and Jay-Z. Most of the songs featured a Black artist, and the mean age of the artists was 28.2 years old. 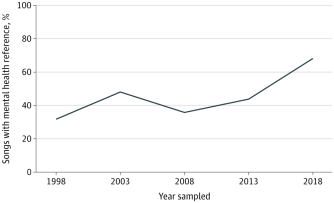 The lyrics were analyzed for references to anxiety (e.g. “Do you experience nervousness or shakiness inside, faintness and dizziness?”); depression (“Went through deep depression when my mama passed…”), and suicide or suicidal ideation (“Only once the drugs are done / Do I feel like dying.”).

Overall, the researchers found that about about one-third of the 125 songs referred to anxiety, 22 percent to depression, and 6 percent to suicide. Alarmingly, these percentages had more than doubled in 2018 as compared to 1998.

Major Depression Among Teens In The U.S.: The Startling Increase | TIMEwww.youtube.com

This isn’t just a rapper thing, as research trends over the years are indicating that young Americans are not okay. The trend in emotionally darker rap lyrics mirrors what has been referred to as the “mental health crisis” in the United States.

Some data has found that psychological stress and suicide risk as rocketed from 2008 to 2017, and that’s particularly true among 18 to 25 year-olds. The prevalence of “major depressive episodes” among US adolescents also increased from 2005 to 2014. According to X, anxiety affects around 30 percent of adolescents, with 80 percent never seeking treatment. The crisis reached a fever pitch in 2017 when the suicide rate among 15 to 24 year olds in the United States peaked at its highest level since 1960. From 2007 to 2017, suicide rates among people aged 10 to 24 rose by a grim 56 percent. Another analysis found that suicide attempts among Black youth rose by 73 percent from 1991 to 2017, while declining for whites.

The finding that rap lyrics have increasing references to mental health problems is significant because of the genre’s popularity amongst American youth, who now spend nearly 40 hours per week listening to music. The authors note that rap artists influence “the development of these young people’s identities.”

The researchers noted that they could not determine “whether these lyrical references to mental health are due to rap artists’ desires to self-disclose or to instigate discussions about mental health,” according to the study. “Because rap is an autobiographical art form, the artists and younger adults may have observed and reflected national trends of distress experienced by themselves or people close to them.” 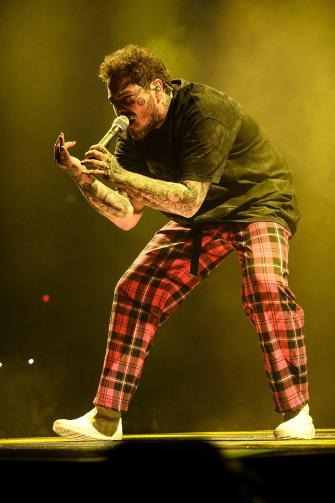 Over the past two decades, rappers have begun to embrace emotional vulnerability in ways they hadn’t previously, for example Kanye West and J. Cole. In fact, researchers of the study suggested that the increase of references was linked to Kanye West’s 2008 album “808s & Heartbreak,” noting that artists such as Drake, Juice WRLD, and Post Malone (all of whom had songs examined in the study) have nodded to West’s album as having had influence on their music styles. Even before male emotional introspection and mental health were part of the mainstream discourse, they were being embraced in rap.

More research will be necessary, the authors write, to understand “how this music can improve the mental health of its listeners or how it might lead to greater risk.” In conclusion, the authors highlight that the study underscores a need to examine rap music and now, depending on the messaging, it may be able to reduce stigma surrounding mental illness by putting it in the spotlight.

Metabolism and mitochondrial functioning seem to have far more to do with mental health than many people might expect.
Up Next
Neuropsych

Loneliness is wired into the human brain. Here’s what it looks like.

A large study shows changes in the brain scans of lonely people in the area involved in imagination, memory, and daydreaming.