Though Alexander Fleming’s fame as the father of penicillin took nearly two decades to manifest, the discovery had a profound effect on humankind. Amazingly, every single dose in existence is derived from a single cantaloupe purchased in Peoria. Within a year of scraping mold from that fruit, American pharmaceutical companies were producing 100 million units per month.

The timing was fortuitous as medicine was in great demand during World War II. Antibiotics have since played an essential role in medicine (although sometimes negatively). That could soon change. As Bill Bryson writes in his new book, The Body: A Guide For Occupants, from the fifties through the nineties, Big Pharma churned out three new strains per year. Now the pace is one every other year, and declining.

The reason? We’re becoming resistant to antibiotics. The money is drying up. Big Pharma would rather focus on drugs that hook us for life, such as statins and selective serotonin reuptake inhibitors (SSRIs).

Even beyond the serious problem of disappearing antibiotics, this profit-driven approach to medicine could be our undoing. Except in cases of medical necessity, no human should take a pill for life. For all the seemingly beneficial qualities of SSRIs, they’re proving woefully ineffective (and sometimes downright deadly) over the longterm. We need better solutions.

Enter Paul Stamets, one of the world’s foremost experts on fungi. The mycologist was recently a guest on the Joe Rogan Experience, where he’s preached the benefits of mycelia before. Discussing psilocybin, the psychedelic strains of mushrooms that have received much attention of late for their potentially therapeutic applications, Stamets noted that there is early research evidence that “the neurogenic benefits of microdosing are greater than the neurogenic benefits of macrodosing.”

That’s a big claim, but an important one, if true. Microdosing has predominantly been relegated (in the popular media’s eyes) to tech workers using various protocols of psilocybin and LSD for productivity gains. Stamets touches on this when saying, “Any new businesses populated in pinnacle by young people who are not doing microdosing are going to be at a competitive disadvantage.” 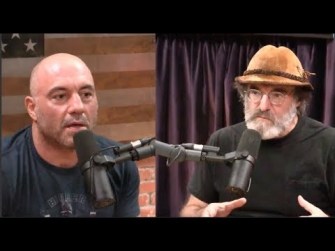 More relevant to the larger population is the potential for psychedelics to treat depression and other mental health disorders. Unlike current medications, serotonergic psychedelics appear to “reboot” certain brain regions, resulting in an improved mental health outlook. One recent study confirms their role in neurogenesis; the authors write, “psychedelics cause both structural and functional changes in cortical neurons.”

Another recent study investigated how microdosing affects creativity. Though “creativity” is often treated as an artistic endeavor, it is actually a fundamental aspect of cognition. One effect of depression is an inability to imagine a better future; the depressed feel “stuck.” One method for overcoming this mindset is to creatively imagine different outcomes to the problems we face. English drug policy reformer Amanda Feilding calls psychedelics “tools for creativity, because they enable different parts of the brain to work simultaneously, allowing for new combinations of ideas to come together.”

For the microdosing study, researchers examined the effects of psychedelic truffles (masses of mycelia that contain psilocybin) in the Netherlands. (Though the Dutch government outlawed psilocybin mushrooms in 2007, they continue to allow the sale of truffles.) Psilocybin binds to serotonin 2A receptors, the result being “enhanced cognitive flexibility, improved associated learning, and hippocampal neurogenesis.” It has also been shown to improve optimism and provide a sense of subjective wellbeing.

Researchers did not use a control group for this study, so, as with the gamut of psychedelic research, more research is needed. But we do need it. The FDA is seeking better treatments for chronic mental heath problems. The agency has labeled MDMA research as a breakthrough therapy for PTSD due to positive early evidence of its efficacy. The same agency allows the usage of the psychedelic ketamine (under the name esketamine) to address treatment-resistant depression. Psilocybin has been shown to be effective in treating this condition as well.

Meanwhile, DARPA, part of the United States Department of Defense, is attempting to tamp down the hallucinatory effects of MDMA and psilocybin to treat PTSD and depression in the military. Perhaps the agency should consult with Stamets, who noted the beneficial effects of combining psychedelics with niacin (vitamin B3). According to the mycologist, that helps prevent abuse, dilates blood vessels to better deliver the neurogenic effects of psychedelics, and excites nerve endings.

“I hope to see, in the future, psilocybin mushrooms being sold as over-the-counter vitamins approved by the FDA and stacked with niacin.” 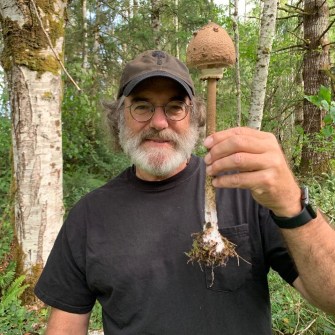 Paul Stamets holding up a mushroom.

Beware the danger: the list of maladies that psychedelics are being associated with helping is extensive and must not prematurely be considered therapeutic (as is the case with CBD, for example). That said, the old models are not working and early evidence of the efficacy of psychedelics is positive. The fact that you don’t need a heroic dose to treat a number of mental health problems means that a clinically relevant path of investigation lies ahead.

Stamets claims he only takes ritual-sized doses of psilocybin two times a year. (His recent dose of 20 grams is worthy of its own study; my own experience with four grams was harrowing enough.) Following the mycologist’s lead, we need to consider both relevant in our culture: trip-sized rituals that provide context and meaning and therapeutic-sized doses that address the greatest mental health issues of today.

Stamets has recently helped launch a microdosing study (which I am beginning next week). It’s an anonymous, crowd-sourced correlational study that will track self-reported cognitive performance and mental health attitudes. Since there is no control, the results will be anecdotal, but we mustn’t overlook the relevance of personal experiences. As much as we need to lean on science for creating trustworthy therapeutic models, the individual outlook on existence is an equally relevant aspect of mental health.

In The Body, Bryson discusses the fact that our brains don’t distinguish between physical and emotional pain. “In many ways,” he writes, “we feel the pain we expect to feel.” While we should never write off certain forms of chronic pain, perception greatly influences how you physically and emotionally feel. Acts such as having sex, eating food you love, and listening to great music all reduce pain levels, proving its malleability and transiency.

By whatever mechanism they work, psychedelics have long been shown to increase positive outlooks and decrease negative sentiments. That is valuable and needed medicine. We’ve exhausted the alternatives and found them insufficient. This is not medical advice—just common sense.

Tags
depressionhealth care reformhuman bodymedical researchmental healthptsd
In this article
depressionhealth care reformhuman bodymedical researchmental healthptsd
Related
Health
New blood types are often discovered following medical disasters
New blood types are regularly discovered by an unusual absence or an unusual presence — both of which can result in tragedy.
Neuropsych
How you breathe affects your brain
Your breathing rhythm influences a wide range of behaviors, cognition, and emotion.
Health
What happens when regular porn watchers abstain for a week?
Researchers watched for signs of withdrawal — but didn’t find any.
Health
COVID, RSV and the flu: A case of viral interference?
Viruses, it turns out, can block one another and take turns to dominate.
Health
What decades of research tells us about living the good life
Warm relationships protect your mind and body from the slings and arrows of life.
Up Next
The Present
Love big ideas? Big Think is seeking a social media intern!
Want to build your skills while working on content that makes you smarter, faster? Apply now.