There was a lot of excitement when the FDA fast-tracked trials for ketamine as a depression treatment in 2016. The announcement marked a major turning point in our understanding of psychedelics, which were deemed a Schedule 1 substance as part of Richard Nixon’s racist 1970 “War on Drugs.” Ketamine was approved for use as an anesthetic that same year; due to increasing recreational usage in the 1990s, however, it was deemed Schedule III in America in 1999.

Though ketamine is not a traditional psychedelic—they have an agonist (or partial agonist) effect at brain serotonin 5-HT2A receptors—it falls into this class due to its hallucinogenic and dissociative effects. Recently it has been referred to as a “party psychedelic.” Psychedelic therapy advocates were pleased when the FDA approved a nasal spray medication for treatment-resistant depression known as esketamine in 2019. Janssen Pharmaceuticals launched Spravato shortly after.

This move is exciting. Trials of two types of ketamine—racemic ketamine and esketamine—showed early positive results, even though researchers are not exactly sure how it functions in depression treatment. We do know antidepressants and antipsychotics are showing less efficacy and more chronic side effects than previously believed, however.

There is precedent in the psychedelic realm. Psilocybin, ayahuasca, ibogaine, MDMA, and LSD are showing early positive results in treating anxiety, depression, addiction, and PTSD. This does not mean we should rush blindly ahead, however.

That’s the consensus reached by Mark Horowitz (writer) and Joanna Moncrieff (editor), whose recent analysis, published in The British Journal of Psychiatry, concludes that we’re moving too fast in clinically adopting ketamine. As their data shows, caution is necessary.

Since its discovery in 1962, ketamine has been used broadly as a sedative and anesthetic; to aid in emergency surgeries in war zones; as a bronchodilator for severe asthmatics; to treat certain type of seizures; in postoperative pain management; and now, as a nasal spray to treat depression. Unlike SSRIs and SNRIs, esketamine works immediately—in as little as two hours—making it more attractive to patients and clinicians.

The Experimental Ketamine Cure for Depressionwww.youtube.com

While treatment-resistant depression sounds extreme, Horowitz notes the definition: patients unsuccessful with two different antidepressants, a low bar for the term “resistant.” The problem with trying esketamine, he writes, falls back on the FDA fast-tracking of the drug.

“Out of the three short-term trials conducted by Janssen only one showed a statistically significant difference between esketamine and placebo. These were even shorter than the 6–8 week trials the FDA usually requires for drug licensing.”

Each trial lasted only four weeks. The FDA normally requires that two such trials show better results than the placebo; in this case, only one achieved this goal. The successful trial showed a four-point margin on a scale that goes to 60.

Failing to provide two effective trials, the FDA allowed Janssen to submit a discontinuation trial as evidence. This 16-week trial let patients either continue or stop treatment. The problem: side effects were treated as evidence of relapse, not withdrawal symptoms.

Ketamine users have a long history of withdrawal issues, including anxiety, poor appetite, delusions, hallucinations, paranoia, addiction, rage, and craving. The discontinuation trial considers such effects as proof of ketamine’s efficacy, not as symptoms of withdrawal.

Science writer Peter Simons explains why this is worrisome:

“Perhaps even more concerning is the fact that, within the discontinuation trial, a single site in Poland drove the apparent finding of efficacy. Data from this site suggested that 100% of the placebo group supposedly relapsed (compared with about 33% of the placebo group in all the other sites)—an unlikely result. When data from this suspicious outlier was removed, the study analysis showed no evidence that esketamine was better than the placebo.”

Add to this that six people in the esketamine group died during the trials, including three by suicide—two of whom had previously shown no signs of suicidal ideations—and a troubling picture emerges. The FDA accepted Janssen’s explanation: the problem wasn’t esketamine, but their underlying condition. This is possible, but the company did not provide conclusive evidence. 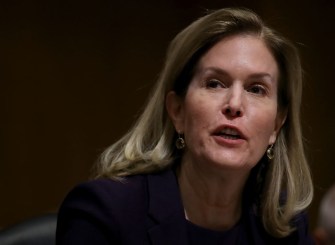 Jennifer Taubert, executive vice president and worldwide chairman of Janssen Pharmaceuticals, Johnson & Johnson, testifies before the Senate Finance Committee on “Drug Pricing in America: A Prescription for Change, Part II” February 26, 2019 in Washington, DC. The committee heard testimony from a panel of pharmaceutical company CEOs on the reasons for rising costs of prescription drugs.Photo by Win McNamee/Getty Images

According to Horowitz, this is a chronic problem with clinical trials and governing agencies.

“It would seem that themes from history are repeating: a known drug of misuse, associated with significant harm, is increasingly promoted despite scant evidence of efficacy and without adequate longterm safety studies.”

He also notes that half of the patients experienced disassociation and one-third experienced dizziness. On this point, allow me to break the fourth wall. I’ve been experimenting with psychedelics since 1994 and am writing a book on psychedelics in ritual and therapy. I ingested a range of substances during my college years. By far, the most troublesome was ketamine. While I’m now aware of Parecelsus’s dictum—what is beneficial in small doses is toxic in large doses—I wasn’t measuring it out in the 1990s.

Administered doses in Janssen’s trials were considered similar to recreational usage. I recall that a bump provided an energetic lift, yet when I’d occasionally snort a line, all bets were off. After a hearty dose one evening, I laid down, sat up, and stood in succession. I couldn’t tell the difference between those three physical positions. Ketamine is the most dissociative substance I’ve ever taken, and I stopped shortly after that last instance.

Psychedelics are the next wave of mental health treatments—call it a continuation, given their role in traditional rituals. We came to rely on pharmacology too much in the twentieth century; hopefully we’re learning from those mistakes. As Horowitz points out, however, it appears we’re not.

The important word in psychedelic therapy is ritual. There are environmental and social factors entwined with our health. In the right context, psychedelics have tremendous healing power. And to be fair, some ketamine clinics are taking proper right safety precautions as well as designing treatment rooms to be more conducive to healing than sterile white rooms. Patients are anecdotally reporting success in depression treatment with ketamine. This isn’t an either-or situation.

But we cannot make the same mistake we’ve made with CBD and believe these substances are cure-alls. We also can’t afford to designate ketamine under the umbrella term “psychedelics.” As Alan Watts wrote, hallucinogen is not a proper definition of the psychedelic experience, though it’s fitting when describing ketamine. Conflating substances will only further confusion during a time when we need clarity. If the addictive properties and dangerous side effects of ketamine play out widely, it endangers the entire psychedelic therapy model.

We can hope for a clinically-effective dosage and delivery mechanism of ketamine. We can’t, as Horowitz’s analysis shows, make the same mistakes over. Pharmacological intervention has a place in psychiatry, but it’s come to dominate the industry, often no better than placebo and psychotherapy. We need healing, not more side effects.