Earlier this year, a derivative of ketamine became the first hallucinogenic substance to be approved for treatment of depression. Under the name esketamine, the nasal spray proved efficacious in helping alleviate treatment-resistant depression. While not a seretonergic psychedelic, such as LSD or psilocybin, ketamine has been associated with these substances for producing similar hallucinations.

The approval of esketamine points to an industry recognizing that the current pharmacological model is failing. Though SSRIs appear helpful in the short-term, chronic problems become evident over years and decades in many users. The correlation (and possible causation) of the increasing numbers of psychiatric drugs being prescribed and increasing mental health issues is too stark to avoid. In many ways, ketamine, first introduced as an anesthetic in 1964, is a gateway drug, opening the public’s mind to the potential of MDMA and psilocybin being used in clinical treatment in the coming years.

Unlike more known substances (such as MDMA and cannabis), ketamine has largely escaped both scrutiny and being labelled a panacea. With marijuana’s widespread legalization and acceptance, the phytocannabinoid, CBD, is being falsely marketed as a cure-all; even pet CBD is projected to become a $1.16 billion industry despite scant evidence of efficacy. Perhaps because of ketamine’s relatively low profile, it has been clinically tested for the past two decades with little fanfare. And many results are returning positively.

Take one new study, published in the journal Nature Communications on November 26, for example. The researchers found that heavy alcohol drinkers reduce their intake after a single ketamine injection. Unlike a pill that you have to consume daily to affect your neurochemistry, ketamine appears to rewire the process of memory consolidation after one dose. Specifically, it overwrites maladaptive reward memories (MRMs), which the researchers write are “learned associations that encode the contingencies between drug-predictive environmental stimuli (e.g. the smell and taste of beer) and drug reward.”

What Ketamine Actually Does To Your Brain

What Ketamine Actually Does To Your Brain

The study’s lead author, Dr. Ravi Das of the UCL Clinical Psychopharmacology Unit, explains that drug and alcohol addiction is caused by this sort of association.

“Essentially, the drug hijacks the brain’s in-built reward-learning system, so that you end up associating environmental ‘triggers’ with the drug. These produce an exaggerated desire to take the drug. Unfortunately, once these reward memories are established, it’s very difficult to re-learn more healthy associations, but it’s vital in order to prevent relapse.”

A total of 90 heavy drinkers took part in the study. Their average weekly intake was 30 pints of beer. After completing a task on the first day, they were given a beer as a reward; the following day, the beer was taken away. This is important because addicts associate the reward with a task.

Whether or not you’re addicted to a substance, anticipation affects us all. While driving to a restaurant to order your favorite meal, you begin producing saliva. If you show up and the dish is unavailable, disappointment is inevitable — your expectations were not met. How you process this letdown is indicative of potential addiction. Do you simply order another dish and move on with your life or does the disappointment continue to cloud your consciousness?

After having their beer taken away, one group was given an intravenous infusion of ketamine; the other, a placebo. A third group was given ketamine but did not partake in the drinking memory retrieval task. 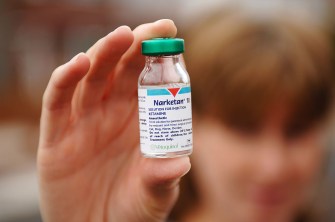 A person holding up a bottle of Ketamine, Horse tranquilliser, UK 2006.

After 10 days all three groups returned to the laboratory. The group that received ketamine and had their beers taken away experienced significant reductions in their urge to drink; they began drinking less alcohol. Nine months later, all three groups had reduced their drinking to some degree, but the above group reduced it the most. Only the groups that received ketamine injections showed a statistically significant reduction in alcohol consumption. This is an important issue in America, where excessive drinking costs the economy an estimated $249 billion and kills 88,000 people every year.

“The striking apparent dampening of reward structures surrounding alcohol and substantial, lasting reductions in drinking levels highlight that reconsolidation interference may form a key part utility of the next generation of more effective long-term treatments for addictive disorders.”

Das calls the study experimental and not clinical; more concrete evidence will be needed for ketamine to be used therapeutically. However, he also notes that current models for alcoholism are not working. We’ve long known that addiction relies on psychological association. Your environment also plays an essential role in addiction. You either need to change your environment or change your relationship to your surroundings. It appears that ketamine might help with the latter challenge.

Becoming less physically active as you get older is not inevitable.
Up Next
Digital Fluency