America doesn’t have a gun problem; it has a mental health problem: a post-mass shooting slogan trotted out time and again. Like many other slogans, it suffers from a major flaw: it isn’t true.

“Counter to public beliefs, the majority of mental health symptoms examined were not related to gun violence. Instead, access to firearms was the primary culprit.”

Language matters, as it is the entry point into understanding the root of any problem. In this case, the stakes are dire. Up to 100,000 Americans are non-fatally injured by firearms each year; between 30,000-40,000 Americans die every year from gunshots. One-third are homicides and 61 percent are suicides, with roughly 1 percent attributed to accidents.

While that’s disturbing enough, Lu and Temple write that there has been a mass shooting (four or more people killed) every single day over the past two years. In these situations, access and ownership appear to be the main catalyst.

This fact has been obscured by the dangerous people framework: guns don’t kill people, people kill people. Lu and Temple respond with the dangerous weapons framework. Give people an opportunity to own weapons and they take advantage of the possibilities.

For this study, Lu and Temple analyze the “temporal relationships between mental health and gun violence” among 663 participants of diverse backgrounds: a third self-identified Hispanics, 27 percent black, 26 percent white, 13 percent other nationalities, with an average age of 22 years old. Notably, 62 percent of respondents were female.

While mental health definitions are sometimes difficult to assess, they investigated a number of conditions, including anxiety, depression, stress, PTSD, hostility, impulsivity, and borderline personality disorder. They discovered that these conditions are not good predictors of gun violence. In fact, out of this list only one—hostility—increased the likelihood of the person threatening another with a gun.

Yet even that number paled in comparison. Those who reported hostile inclinations were 3.5 times more likely to threaten another individual with a gun. What truly predicted gun violence? For gun owners, the risk of threatening another was 18 times greater.

“Prior gun carrying, having access to a gun, and owning a gun were all linked to future gun carrying. Although gun carrying itself is not a violent behavior, research has demonstrated a strong link between this behavior and gun violence victimization.” 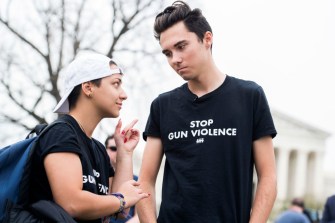 David Hogg and Emma Gonzalez, survivors of the Marjory Stoneman Douglas High School shooting in Parkland, Fla., assemble on the East Front of the Capitol during a rally to organize letters to be delivered to congressional offices calling for an expansion of background checks on gun purchases on Monday, March 25, 2019.

There’s that old sentiment about being a hammer and everything looking like a nail. All technologies become extensions of our bodies, as Marshall McLuhan so eloquently phrased it. Our bodies take on the contours of cars when we’re driving; my mind is extended through the pecking of my fingers on this laptop. Everything we touch becomes an instrument to use. Put something in our hands and we assume it is part of us, and treat it as such.

So much more so with weaponry. If I feel hostile toward someone, it takes a lot of work to physically confront that person with words, much less fists. Extend my consciousness with a gun and the ability to threaten becomes more seductive. The fetishism of firearms is a biological tenet: we like to feel power. Given the opportunity we’re likely to exploit that trait.

Yes, dangerous people exist. Give them a dangerous weapon and their likelihood of engaging in danger increases—by a lot, as this research shows. Volunteers for the infamous Stanford Prison Experiment likely didn’t expect to be torturing fellow citizens a day into the study, but that’s how quickly we adapt to new environments, especially when placed in positions of authority.

As the authors note, this research could be helpful in deciding how to proceed with future gun legislation and treatment for criminals. We just have to ensure that we’re treating the right symptoms. Thanks to research like this, we’re understanding what to focus on, an important step forward in one of the most contentious issues in America today.

It has now been nearly 50 years since humanity first set foot on another world: our Moon. The Apollo missions that brought about these six successful landings are sometimes called […]