Few foods have taken a beating like eggs. From the world’s “perfect food” to leading one down a certain path to a heart attack, eggs have somehow become as polarizing as politics.

In 2017, Harvard suggested that an egg a day shows no increase in your risk of a heart attack, stroke, or any other type of cardiovascular disease. This is not without caveats: three a week is probably the upper level for those suffering from diabetes; cutting down consumption if you’ve already experienced a heart attack (or if you smoke) is wise.

Based on similar research, the U.S. government removed limits related to egg consumption on its dietary guidelines. Dietary cholesterol seemed not to be the devil many assumed. Eggs were back on the plate. Faux egg concoctions dwindled. Yolk advocates reclaimed their trophy as more (but not all) restaurants dropped egg white omelettes from their menus.

Now a new study, conducted by researchers at Northwestern University’s Department of Preventive Medicine — it was published this month in the medical journal JAMA — claims that high consumption of dietary cholesterol (or eggs) increases your risk of both cardiovascular diseases (CVD) and all-cause mortality.

Are eggs good for you?

Are eggs good for you?

Data collection for this paper covered 29,165 participants over 31 years — each participant was followed for an average of 17.5 years. A total of 5,400 CVDs were logged. Specifically: 2,088 coronary artery problems, 1,897 heart failures, 1,302 strokes, and 113 deaths from CVDs. The total number of deaths (all-cause mortality) during this period was 6,132.

The researchers were backtracking to discover participant diets; food logs were not kept. The study is based on self-reporting, which was conducted only at the beginning of the research. Thus, two serious problems: self-reporting without regular tracking can vary widely; their diets might have changed dramatically over the course of 17-plus years. If you claim you eat two eggs a day, then a year later drop eggs altogether, this was not taken into account.

The group’s results were derived from tracking 300 mg increases in daily cholesterol intake. (One large egg has 186 mg, all of which are in the yolk.) For every 300 mg added, a 3.24 percent increase in the chance of suffering from CVD and 4.43 percent increase in dying from anything was observed.

To break this down to round numbers, associate professor Norrina Allen, who participated in the study, notes that consuming two eggs per day increases your likelihood of developing heart disease by 27 percent. She also says that the study, being observational, does not include other factors that could play a role in developing CVD, though the team did factor in age, sex, ethnicity, smoking and drinking habits, and exercise levels — again, all self-reported.

When Bruce Y. Lee was a member of the National Academies of Science, Medicine, and Engineering in 2017, he served on a committee that recommended a multi-factor approach to better understand the relationship between diet and health. As an analogy, he writes that during a rocket launch, engineers take into consideration more than one or two weather factors when determining whether or not to conduct the mission. 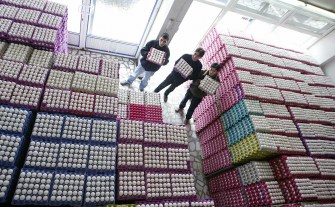 This is a constant problem with health studies. For example, Gary Taubes noted that research decrying the macronutrient, fat, never considered the amount of carbohydrates participants were eating, which seriously skewed the results. Fans of ketogenic diets use the same argument to defend their dietary approach.

Lee says that a holistic mindset should be applied with all nutritional research, noting the eggs are excellent sources of “protein, vitamin D, choline, lutein, and zeaxanthin.” Focusing exclusively on cholesterol levels while negating the benefits might steer people away from a food that could prove beneficial.

Which is all to say that moderation, as with everything, is key. Will an egg a day keep the doctor away? Perhaps. Should you be careful if you suffer from problems such as hypercholesterolemia (genetic high cholesterol)? Absolutely. But does this imply that everyone needs to avoid eggs? Highly doubtful.

Fourteen eggs a week might simply be overkill, especially since you can get the micronutrients elsewhere. Skipping them altogether doesn’t appear to be the right move either. Until more isolated research, involving actual dietary tracking and not self-reporting, takes place, headlines about the dangers of eggs need to be taken with a grain — okay, a pinch — of salt.

You are not what you eat. It’s time to dispel this diet cliché

“We are what our bodies do with what we eat.”
The Past

Was our distant ancestor a biped or not – i.e., human or not human?
Up Next
Health

Horseshoe crabs are drained for their blue blood. That practice will soon be over.

The blood of horseshoe crabs is harvested on a massive scale in order to retrieve a cell critical to medical research. However, recent innovations might make this practice obsolete.