In 2015, a team of researchers led by Brett Ford at the University of California, Berkeley (now at the University of Toronto), asked a seemingly simple question: Can you consciously make yourself happy? Populations in Japan, Russia, Taiwan, and the United States were studied. It turns out that you can will yourself into happiness—except if you live in America.

As the team writes,

“This pattern of results suggests that a culture’s degree of collectivism may play a role in shaping the correlates of pursuing happiness.”

In his book, Lost Connections, Johann Hari discusses this landmark study with Ford. The differences between individualistic cultures like America and collectivistic societies, such as Japan, China, and South Korea, have long been investigated by social scientists. Time and again, the latter produce better outcomes in terms of happiness, well-being, and life satisfaction. A question has long been hanging in the air: Why isn’t America more like these countries? Surely, the richest nation on the planet should be able to provide for its citizens’ mental health.

I’ve written about this difference before, and the criticism I receive tends to trend political—communism versus democracy, socialism is evil, etc. On that front, let’s consider South Korea’s response to the coronavirus pandemic. The constitutional democracy reported its first case the same day as the United States, yet the country was able to flatten the curve within weeks. That’s what happens when a functional government immediately intervenes, tests as many people as possible, and puts restrictions in place on day one.

Meanwhile, our miracle never happened. An unprepared government might be the major problem, but public health issues are multivariate. Here’s where the social distinction matters. In South Korea (as in China), citizens honored the restrictions because they knew that the orders were in the best interest of society. Meanwhile, in freedom-loving America, a “liberty rebellion” was recently held in Idaho, while across the country pastors call for the faithful to gather. Some Floridians even want beaches to open.

Depression and anxiety: How inequality is driving the mental health crisis | Johann Hari

Depression and anxiety: How inequality is driving the mental health crisis | Johann Hari

Reports from Italians and South Koreans and Chinese tell us that sheltering at home is hard. These videos also reveal something important: The citizens know their compliance serves a greater good, protecting their health care workers, elderly, and immunodeficient peers. Over here we’re experiencing an uptick in anxiety and depression. This isn’t surprising in a culture that’s all about the individual.

Depression is Hari’s wheelhouse. He went through the ringer trying to fight it with prescription meds. In the process of conducting research for his book, a number of uncomfortable truths emerged. Namely, that the normal course for fighting depression—SSRIs and SNRIs—isn’t working. They never really did, at least not in the long term. Reporting on extensive research on antidepressant medication, he writes,

“The numbers showed that 25 percent of the effects of antidepressants were due to natural recovery, 50 percent were due to the story you had been told about them, and only 25 percent to the actual chemicals.”

In 2010, journalist Robert Whitaker came to the same conclusion: It’s the environment, dummy. The problem is that the story of a chemical imbalance is easy to grasp. Complex social dynamics—income disparity, racism, verbal and physical abuse, gender discrimination, technology addiction—are cognitively taxing, though these are the real drivers of depression. “The medicine clearly doesn’t fix a chemical imbalance in the brain,” he writes. “Instead, it does precisely the opposite.”

Hari writes that between 65-80 percent of people on antidepressants continue to be depressed. Clearly the drugs aren’t working. What then to do? You have to address the root problem. Let’s start with income disparity so that the citizens of the richest nation in the history of Earth can pay their rent. Perhaps, as Hari recently suggested, we should try universal basic income.

“The single biggest thing that will affect people’s anxiety is not knowing if you’re going to be thrown out of your home next month or how you’re going to feed your children. And I think there’s an element of cruel optimism in telling a country of people living paycheck to paycheck that they should be responding to the anxiety they’re experiencing this moment primarily by meditating and switching off the news. That’s not going to solve the problem. The single most important thing that has to be done to deal with people’s depression and anxiety is to deal with the financial insecurity they’re facing.” 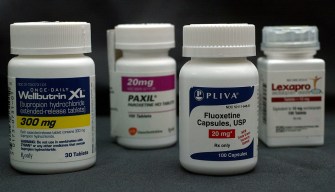 Bottles of antidepressant pills named (L-R) Wellbutrin, Paxil, Fluoxetine and Lexapro are shown March 23, 2004 photographed in Miami, Florida. The Food and Drug Administration asked makers of popular anti-depressants to add or strengthen suicide-related warnings on their labels as well as the possibility of worsening depression especially at the beginning of treatment or when the doses are increased or decreased.

Rather socialist of him, but really, the “we can’t afford this” argument aimed at everything our administration can’t monetize has always been wrong. It’s getting dangerous out here, and it’s not clearing up.

Hari isn’t denying that there can be biological and genetic causes of depression. As he argues in his book, we completely overlook the social causes. Decade after decade, the American social structure has been fragmenting more and more. Our close relationships are shrinking. A million online friends will never replace the one person you can call at midnight to work through troublesome thoughts with.

Depression isn’t a brain malfunction. That might be a result, but it’s rarely the cause. Rather, Hari writes, it’s “an understandable response to adversity.” Right now, we’re collectively trying to manage the most widespread adversity in generations. Pretending that you can slay that dragon yourself will only get you burned.

The first level is individual: strengthen your social connections. This might prove difficult at this particular moment, but framing this challenge as a societal issue is going to serve you better in the long run than taking it personally. Of course, none of this is easy. We’ve been raised to believe that each one of us can be our own brand—a rather lonely occupation. Humans are social animals. We need to honor that.

The second level requires participation in our democracy, which means voting for representatives that champion concepts like health care for all and UBI. This nonsensical argument that we can’t pay for it while a tiny percentage of the wealthiest citizens pay little to no taxes is ludicrous. In Lost Connections, Hari reported from Berlin’s low-income neighborhood of Kotti, where rent hikes were driving lifelong residents out. Conservative Turkish immigrants, German hipsters, and the owner of a gay club, usually wary of one another, came together to fight back. Not only did they win (not every victory, but some important ones), they were bonded by their shared sense of community. Many became friends.

Hari notes that El Salvador, which happens to be among the world’s poorest nations, has canceled every citizen’s rent and utility bills for the next three months. “If El Salvador can do it,” he says, “America can do it.” It will require, as he writes, rethinking what medicine actually is.

“An antidepressant…isn’t just a pill. It’s anything that lifts your despair. The evidence that chemical antidepressants don’t work for most people shouldn’t make us give up on the idea of an antidepressant. But it should make us look for better antidepressants—and they may not look anything like we’ve been trained to think of them by Big Pharma.”

If you want to fight depression and anxiety, you need to change the story you tell yourself. As a society, we need to empower everyone so that they can climb the bottom rungs of Maslow’s hierarchy of needs—ensure everyone’s health and provide enough financial support for basic needs—and encourage group participation instead of espousing the bootstraps rhetoric. It’s not rocket science and it’s certainly not modern psychiatry. It’s common sense.

Metabolism and mitochondrial functioning seem to have far more to do with mental health than many people might expect.
Up Next
Health

Gyms and fitness centers are closed, but your living room is always open.