Coronaviruses are a family of viruses, ranging from the common cold to MERS and SARS. COVID-19, the coronavirus currently under discussion, is a novel strain that is new to humans. All coronaviruses can be transmitted from other animals to humans. Affected humans experience respiratory problems, fever, and coughing. Those with weakened immune systems, such as elderly patients and smokers, are most likely to die from COVID-19.

The estimated mortality rate is between 2-3.4 percent. An exact number is hard to pin down as there is no certainty on the exact number of cases worldwide, though the John Hopkins tracker currently lists over 94,200 people affected. Thus far, over 51,000 people have fully recovered.

While there are a lot of comparisons to the flu, COVID-19 is an entirely different virus. The flu vaccine will not protect you against a coronavirus.

Where it came from

The search for Patient Zero is ongoing. The World Health Organization (WHO) speculates that the virus started at an outdoor market in Wuhan, China. As the organization writes, “The current most likely hypothesis is that an intermediary host animal has played a role in the transmission.”

Thus far that speculation is either on bats or pangolins. Bats host over 500 coronaviruses and are considered one of the most transmissible animals to humans. Pangolins are scaly anteaters. They are illegal to purchase in China, though they constitute a booming source of illegal trade. Both animals could have played a role in the transmission to humans, but thus far there is no conclusive evidence.

Effects in America (so far)

Four new cases were announced this morning (March 4) in New York. So far 118 cases have been recorded, with nine confirmed deaths. With six new cases in Los Angeles County also announced this morning (causing country officials to declare a local state of emergency), the total in California is 51, the highest of any state. Globally, we know of over 94,200 affected and 3,200 deaths.

The most pressing problems are a lack of testing kits and respirators. The shortage in testing kits has been a major failure of this administration. China is currently conducting 1.6 million tests per week; as of five days ago, the US had only tested 459 people. New kits are reportedly being produced. Meanwhile, the government has reportedly ordered 500 million respirators and face masks over the next year-and-a-half.

The economic impact is hard to estimate. A few weeks ago, it was estimated that Los Angeles tourism could suffer a nearly $1 billion impact from the virus. My wife, who works in a downtown Los Angeles hotel, says that every day room blocks, conferences, and filming are being cancelled throughout the area.

A few hours north, Google recently cancelled its annual Google I/O developer conference. Twitter, Facebook, Intel, and Amazon Studios are among the companies that have pulled out of SXSW. These cancellations affect a number of industries: travel, lodging, food, entertainment. The nationwide economic impact will be tough to estimate at this time, especially if, as with the Spanish Influenza Pandemic of 1918-19, the virus returns in the fall. 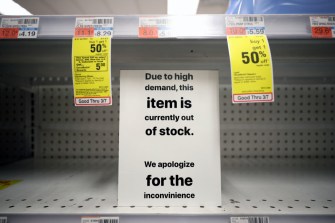 Sold out sign is seen on a shelve of a supermarket. Sanitary gels and antibacterial hand wash products become out of stock in several supermarkets as the fear of coronavirus outbreak grows in New York, United States on March 4, 2020.

A (brief) history of pandemics

Pandemics originated with animal domestication roughly 12,000 years ago. Before that time, human interactions with other animals was limited. With the emergence of modern agriculture and global trade (and conquer), disease became more widespread.

For better or worse, COVID-19 is being compared to the Spanish Flu pandemic of 1918-1919. Over 500 million people were affected globally, with death estimates ranging from 17 million all the way up to 100 million. The danger of relating this coronavirus is that, as mentioned above, this is not a flu; no current vaccines will protect you, and the mortality rate is much higher. Most deaths from that flu epidemic occurred during the second year, however, which we should treat as a cautionary tale. Preparation is essential.

A COVID-19 vaccine is at least a year away. That means potential outbreaks right now or in the fall will have to rely on best practices and preventive care.

At the moment, the consensus is that you are generally safe. Hand washing and not touching your face remain our best defense. The CDC even released a facial hair guide for respirators (which doesn’t bode well for my beard). In summation: live life, cautiously.

One of the most disturbing trends is the hoarding of hand sanitizers and face masks. Those masks are needed by health care workers, who are the most affected population. You’re not decreasing your risk, but you are certainly putting others in harm’s way. As Time notes, “The CDC recommends surgical masks only for people who already show symptoms of coronavirus and must go outside, since wearing a mask can help prevent spreading the virus by protecting others nearby when you cough or sneeze.”

On Amazon, a 12-pack of Purell is currently being sold for $400, while an 8-pack of another brand is going for the bargain of $130. Hand sanitizers are not as effective as soap. DIY hand sanitizer instructions are booming on social media, yet these solutions can prove dangerous. Keep a bottle of Dr. Bronner’s nearby and go about your day.

We need to be smart about all of this and should not minimize the risks. But fear only creates more anxiety, which has a negative impact on your immune system. All that stress will only make things worse if you do become affected.

Tags
healthhealth carepandemicpublic healthsanitationVaccines
In this article
healthhealth carepandemicpublic healthsanitationVaccines
Related
The bizarre history of exercise explained in 8 minutes
Harvard professor Daniel Lieberman debunks the ‘10,000 steps per day’ myth.
▸
8 min
—
with
Daniel Lieberman
Health
America’s maternal death rate: “This is a national crisis”
Black women are 3x more likely to die giving birth. Here’s one plan to fix that.
▸
7 min
—
with
Michael Dowling
Harvard professor debunks the biggest exercise myths
Exercise culture is crazy. But what you need to do is exceedingly simple.
▸
with
Daniel Lieberman
Health
Food expiration dates don’t have much science behind them
A food safety researcher explains another way to know what’s too old to eat.
The Present
Five key findings from the 2022 UN Population Prospects
Explore the key highlights from the UN’s latest release of its world population estimates.
Up Next
Starts With A Bang
Starts With A Bang #54 — The Origin Of Stars
Ever wonder, exactly, how stars form from molecular gas and dust? So do scientists.One of the great challenges for astronomy is to determine, in gory detail, how stars are formed […]