The shock of Chadwick Boseman’s death continues to reverberate around the world. Boseman’s story hit especially hard considering he kept news of the colon cancer that took his life hidden for four years. Beyond his outrageous talent and humanitarian bent, the fact that someone in such great shape was taken out at the age of 43 woke up the entire world about the dangers of colon cancer—which is, in fact, affecting younger demographics every year.

Colon cancer forms in the large intestine. This process begins with small, noncancerous polyps. Some of these polyps become colon cancers. Screenings are especially important since polyps do not show symptoms. When identified, they can be removed before turning into a cancer.

Polyps are more likely to contain cancer when larger than one centimeter, more than three are found, and when dysplasia (precancerous cells) is discovered after removal. Cancer first grows in the walls of the colon or rectum after originating in a polyp. If untreated, the cancer can spread to lymph nodes around the body.

While most colorectal cancers are adenocarcinomas, other types include carcinoid tumors, gastrointestinal stromal tumors, lymphomas, and sarcomas. The exact causes of these cancers are unknown, but lifestyle and environmental factors (listed below) appear to promote colorectal cancers, especially in younger people.

Colorectal cancer affects men and women equally. In 2020, 147,950 people are expected to be diagnosed with colorectal cancer. It is also the second-leading cause of death in America, with an expected 53,000 people dying from it this year.

Colorectal cancer affects African-Americans particularly hard. They’re 20 percent more likely to get this cancer and 40 percent more likely to die from it than any other racial groups. While 90 percent of individuals survive this cancer for five years or more when detected early, only 9 percent of Black men survive five years or more when discovered in an advanced stage.

While age is a factor, that too is changing. In 2001-02, the average age for getting this cancer was 72; 15 years later, it dropped to 66. More disturbingly, the rate of people dying from colorectal cancer in their 40s is increasing. Between 2007-16, there was a 2 percent increase in deaths in this age group every year. Twenty percent of colorectal cancers are now found in people aged 20-54. This fits with an ongoing trend: an estimated 18,000 Americans under age 50 are expected to be diagnosed with cancer this year. 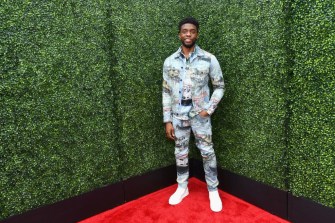 Sara Stewart is a survivor of stage III colon cancer. While all cancers are terrible, she says people are especially unlikely to discuss colon cancer—and that needs to change. Colorectal cancers are predicted to increase by 90 percent by 2030. She advises broader discussions on this topic, an especially important point as she didn’t take her own symptoms seriously for two years. Her gastroenterologist discovered a sizable tumor after she finally agreed to a colonoscopy.

Incredibly, a connection in Hollywood helped her change her perspective on cancer. This connection never told anyone about her own struggle with colon cancer because “she would be blackballed from jobs, written off as unreliable and sickly, even though she continued to work long hours around her treatments.” In fact, she lost a big job after someone discovered her cancer. Stewart continues,

“Is it any wonder that Boseman, with his meteoric rise to fame and the responsibility of being one of the preeminent faces of Black empowerment in Hollywood and beyond, didn’t share his diagnosis publicly?”

Fabian Alsultany has worked in the music industry for over a quarter-century, and he did not remain quiet about his struggle with colon cancer 2B—a tumor perforated his colon. A surgery to remove the tumor (and cut out inches of his colon) and six months of chemotherapy left him exhausted.

“My reality was existing in a two-week cycle of death and rebirth. I experienced every side effect in the book: extreme nausea, neuropathy, dizziness, loss of appetite, hair loss, inability to hold any food in…you get the point: it was miserable. I was fortunate to have my family and friends around me through it all.”

Fortunately, Alsultany was able to confide in those around him. He also documented his cancer journey through his blog. While he’s an outspoken advocate for discussing cancer, not everyone feels safe in this regard.

Social connections are especially important when struggling with cancer. Hopefully, the ridiculous stigma around cancer, as evidenced in Stewart’s writing above, will end with Boseman’s death. We need to have these conversations without fear of retribution, and our health care system must make screenings affordable and available to everyone.

How Neptune’s Triton Destroyed Nearly All Of Its Moons

The largest moon around our last planet didn’t originate with Neptune.When it comes to the moons of our Solar System, there’s only one planet that doesn’t fit in with our expectations: […]