If there were ever a week in which anxiety disorders were peaking, this would be it. As if we needed the extra stress. Roughly 10 percent of the global population deals with an anxiety disorder; in America, 19.1 percent of adults suffer from anxiety every year, costing the US economy an estimated $50 billion. Anxiety negatively impacts relationships and well-being while often increasing suicidal thoughts and attempts. We live in tense times.

There are many causes of anxiety. It is rare for someone to be okay in every facet of their life before one event throws them into disorder territory. Therefore, we must investigate the many varied causes of stress in order to come to terms with the environment sufferers live within. We know that one main driver of anxiety is diet, as a new study from a team of Canadian researchers confirms.

Publishing their findings in International Journal of Environmental Research and Public Health, lead author, Karen Davidson at Kwantlen Polytechnic University, says that “for those who consumed less than three sources of fruits and vegetables daily, there was at least at 24% higher odds of anxiety disorder diagnosis.”

As stated, anxiety is multivariate. It also affects different populations. Anxiety disorders are more common in women and occur more often in younger populations than older groups. Married people fare better, but the obese do not. Those who exercise regularly are less likely to suffer, while smokers and those who eat the typically sugar-rich “Western diet” are more likely to have such a disorder.

For this study, the researchers used data from the Canadian Longitudinal Study on Aging (CLSA), which totaled 26,991 volunteers. Nearly half were men, over 80 percent were born in Canada, and nearly 60 percent were aged 45-65 years. A total of 8.5 percent of study participants self-report suffering from anxiety.

By utilizing physical exams, lab tests, and interviews, the researchers constructed a model to better understand factors that lead to anxiety. Interestingly, given the multicultural demographic of Canada, the researchers also focused on another population: immigrants. Canadian-born citizens were twice as likely to suffer from anxiety disorder than immigrants to that country, including from Africa, Asia, Mexico, and Europe. As the team writes,

“This ‘healthy migrant advantage’ may be attributable to ‘selection effects’, whereby those with physical health conditions or mental health problems, such as anxiety disorders, may be less likely to immigrate. Conversely, those who choose to immigrate may engage in health behaviors that are protective against poor mental health.” 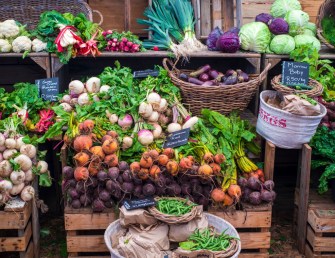 A vegetable stalls at the Oranjezicht City Farm, a farmers-style market for local farmers and artisanal food producers in Cape Town, held every Saturday and Sunday at the V&A Waterfront, Cape Town, South Africa.

For this study, the team focused on four major questions: Does immigrant status affect the prevalence of anxiety disorder? Does the association between immigrants and natural born citizens take into consideration socio-demographic, health, and nutritional correlates? What specific dietary intakes are associated with anxiety? What other factors matter when controlling for immigrant status?

Overall, they found that immigrants are less likely to suffer from anxiety than Canadian-born citizens: one in 15 compared to one in 10. Still, the team believes equal measures should be taken to protect the entire society against the prevalence of anxiety. They also suggest further research be done to measure the fiber, calcium, and vitamin D intake of all Canadians.

One thing remains clear: high-sugar, highly processed diets lead to more anxiety. Whether correlation or causation, those that exhibit a higher intake of fruits and vegetables fare better. It’s not the only factor, but it’s an important one that we don’t seem to pay enough attention to.

If you want a medication to kick in faster, lean right.
Smart Skills

Cognitive fatigue results from thinking too hard and long. Neuroscientists now believe they know why this occurs.
Up Next
Starts With A Bang

When two black holes merge, a significant portion of their mass can get converted into energy in one very short time interval. When this occurs for supermassive black holes, they […]