My Electric Toothbrush’s Nervous Breakdown, and Other Anxieties of Domestic Technology 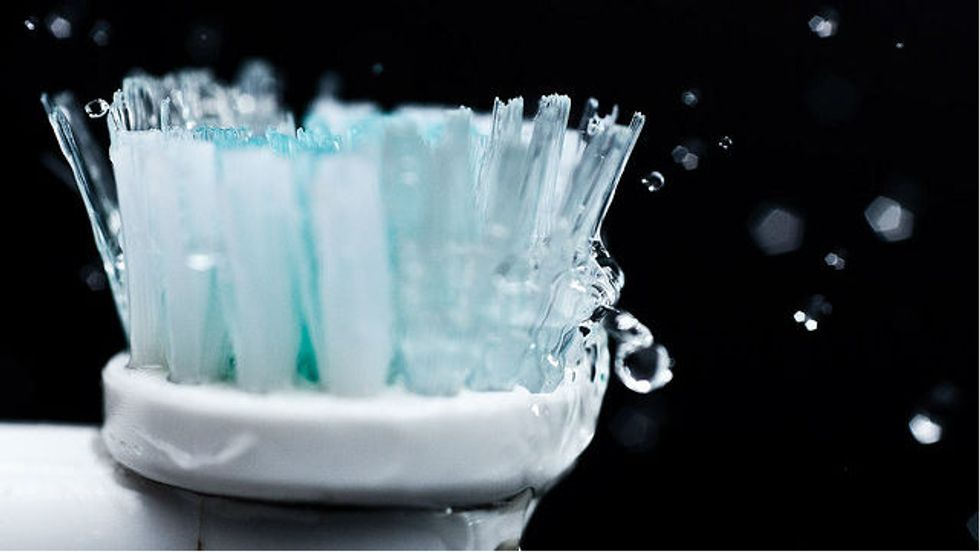 My electric toothbrush kept me up half the night like a squalling newborn.

The trouble began yesterday. My husband and I were sitting downstairs when we heard a thunderous rumbling on the second floor. I ran upstairs to find my toothbrush whirring to life, all on its own and for no reason, while standing in its specially-designed recharging stand next to its specially-designed, ultraviolet microbe-killing sanitizer unit that looks like the world’s smallest nuclear reactor and glows a sci-fi blue when working.

Just as suddenly, the toothbrush stopped. Then it started again. I took it off its stand. It still vibrated and whirred frantically. I unplugged the wall unit. I deployed my favorite technological fix: I pushed random buttons. My first instinct when confronted with a “check engine” light in the car is to change the radio station and hope that helps.

I guess I’ve come to see my gadgets anthropomorphically, because I had the toothbrush “lay down” on the side of the sink, which helped for a while.

Then the racket resumed. The toothbrush, unprovoked, was jumping about in the sink on the force of its own vibrations like Linda Blair in her bed in The Exorcist.

Eventually the toothbrush’s rumbles settled in to a distinct pattern.

“That’s an S.O.S signal,” my husband informed me confidently.

An S.O.S.?  This isn’t exactly the Titanic, or the Andrea Gail battling 100-foot nor’easter waves. It’s a toothbrush.  What possible S.O.S. does it need to send?

True, it’s no ordinary toothbrush. It’s a Phillips Sonicare. It comes with superhero settings, like MaxCare, that promise a thrilling, gum-abrading adventure. I hesitate to tell you how much the toothbrush costs, although my dentist implored me to get it, since I’ve had gum trouble in the past. It’s one of those wincing tale of two worlds moments, when you must confess that your toothbrush costs more than trash pickers in Mumbai slums would see in months.

If you have one, you know how outrageously expensive it is.  If you don’t, then imagine the very highest price that you think you could pay for a toothbrush, and multiply it by 15.

My toothbrush had a bad night last night. It had three outbursts. By 4 a.m., I resorted to technological domestic violence. I banged it hard against the linen closet shelf, and then smothered it in a thick pile of towels. I fantasized of John Wayne shooting the damn thing.

Apparently, the high-strung toothbrush has suffered a nervous breakdown, or a psychotic episode.

It lay at peace this morning at the bottom of the towel pile where I left it, so, apprehensively, I turned it on and tried to brush my teeth. One shouldn’t start one’s day frightened of a toothbrush, I don’t think.

I’m unsure about how to dispose of it, when the toothbrush must finally be “put down.” Given its tendency to violent outburst, even when freed from any discernible power source, I don’t think I can put it in the regular garbage, as it might rumble to life and injure someone. I’ve considered putting it under the floorboards like Edgar Allen Poe’s telltale heart, as a constant warning about my domestic techno-dependence, and of all the ways that technological design irritates my life as much as it makes it easier.

Technology that promises to remove small annoyances of one kind introduces small annoyances of another. I think of the jittery, hyper-receptivity of Word—whole lines of text moved because I accidentally hit a key combination with some macro function I didn’t know—and I see technology as a painfully over-solicitous waiter, who talks about what “we” are going to eat and is always right there with the pepper mill in your face.

At some point, excessively solicitous service, or design, becomes its own sly form of aggression.

Another analogy comes to mind when I do my Beep Inventory.  Make a list of each and every object that beeps, bings, blinks, or otherwise “speaks” to you in the morning.

One school day I got beeped at 10 times in 25 minutes: the alarm clock; the timer on the stove for the eggs; the microwave; the end of the dryer’s cycle; the I-phone as it rumbled to tell me that I had a message; my laptop as it awakened from its own slumber with that Pavlovian Windows tune;  the car as I chirped it open; the car as I failed to put my seatbelt on fast enough; a neighbor’s car, somewhere, that sang its futile Car Alarm Blues, the beeps and ululations that a friend of mine in L.A. heard so often in the 1990s that she could sing the tune by heart;  and the phone, in the car, with an inconsequential call.

Reviewing my Beep Inventory, what comes to mind is Technology as Nagging Spouse. Do I really need my microwave beeping at me to get a move on? (“Honey, you forgot the popcorn. It’s been sitting there a half-minute now…;” “Would you please put your seatbelt on?”).

Like a nagging spouse, the technology thinks we’re stupid, so if you don’t rush to respond to the first beep, it will continue beeping until you do.

After my dishwasher’s “brain” had a glitch, it periodically uttered a “Da-da-DAH” distress jingle at me the entire day. Since the dishwasher’s brain is utterly inscrutable to me—there is no taking it apart and rigging it back with grey tape (it doesn’t even have buttons)—I had to call in a technician, which cost a fortune, just to get the high priest to materialize.

An axiom: the smaller the annoyances or inconveniences that your appliance is designed to “solve,” the larger the bill to fix it. It cost a lot to fix a problem that wasn’t even a problem. The dishwasher wasn’t mechanically broken, it was just mentally deranged. Appliances don’t break today so much as they have breakdowns, of the nervous kind.

Enfeebled, I move each day in a membranous web of domestic technologies that I don’t understand.

If these strange deities get angry I know there’s little I can do, a meek and ignorant end-user, to beseech them back to good temper. If it's a computer problem, I'll let a ghostly invisible hand, a lovely metaphor of technology's mystical omnipotence, temporarily possess my computer to fix it from afar. Even my husband, who does sophisticated computer modeling, and could program in his sleep, stands helpless before my psychotic toothbrush.

Many of us live at the mercy of things for which we have no intuition. This can’t be good.