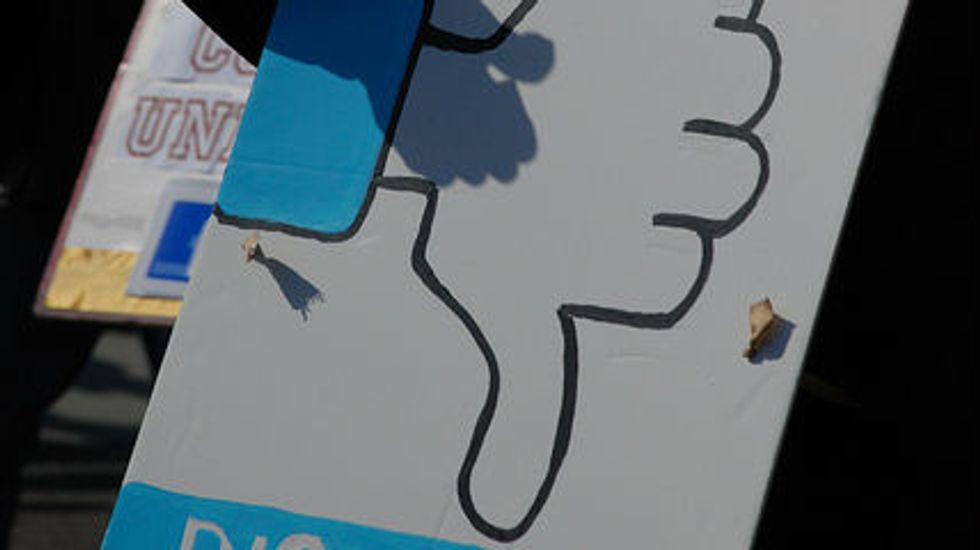 Thankfully, several women’s organizations have started a campaign to have advertisers pull their dollars from Facebook until it gets over its misogyny and rape love. There’s a link to some appalling examples in this Think Progress article.

In its response to the protest, Facebook sniffles that these examples fall into the category of “poor taste.”

In Facebook’s sexual taxonomy, by which underpaid, outsourced minions determine what is acceptable and unacceptable content in under three seconds, this is where a post about “taping and raping” women falls: poor taste.

This is hate speech. It endorses physical battery and violence by one group against another. Can’t you see that, Facebook techno-pissants?

When it’s not absolved as a relatively benign case of poor taste, Facebook misogyny flies under the capacious, all-forgiving flag of the Humor classification.

Although you wouldn’t know it from reading this particular column, I love humor. I think it’s God’s gift to civilization. I know humor when I see it. I also know how the noble art of humor gets abused to justify comments that come from a space of contempt, anger, and hatred as far away from humor as you can imagine. True humor unifies and brings people together, to share a joke, even when they themselves are the butt of the joke. Facebook misogyny has nothing to do with humor by this or any other definition.

Yes, it’s a real side-splitter, a post celebrating men raping women, or that features women’s battered bodies. Those posts still have me in stitches. To say nothing of Facebook users, such as the rapists in Chicago who recently posted video of their gang rape of a 12-year old at gunpoint.

The content that does violate the misogyny-forgiving if not misogyny-loving boundaries of poor taste or humor to become ethically unacceptable and un-funny in the sexual universe according to Facebook includes the following: A picture of breastfeeding, realistic sketches of female genitalia, and a mammogram image.

On my modest Facebook wall alone, I’ve seen removed as pornographic a tasteful, lovely painting of a nude woman that accompanied a New York Review of Books review of Naomi Wolf’s Vagina.  Folks, it’s the New York Review of Books, where the average reader age is somewhere between 70 and dead, and pornographic energy does not exactly ooze off the page.

I’ve also seen removed a picture of a woman whose breast was revealed while she was breastfeeding.

I’ve seen removed clinical drawings of the female reproductive system, as well as a mildly amusing and reassuring collection of drawings of realistic female genitalia, with the caption, “Your lady parts are perfectly normal.”

A friend had an image of her mammogram removed, which was fascinating as art, and not even that suggestive of a breast. It looked more like a Hubble image or the cover of a textbook on electricity.

In some cases, penis is allowed, but not comparable female-descriptive terms. Words are difficult, because what would be aggressive, demeaning, and crude in one context could be loving, sexy and a term of endearment in another.

The basic rule of the Facebook sexual taxonomy seems to go like this: any inadequately sexualized, violent, commercialized, objectified, or titillating image of a woman in her own body as it actually functions and actually looks and actually feels is suspected to be questionable content. The rest is humor and poor taste.

An image of a woman’s body that doesn’t speak to the juvenile male gaze that has colored Facebook as a business culture from its inception becomes visible for scrutiny.

Facebook, you make me sick. Maybe your standards are consistent with the particular culture from which you were created, starting with Zuckerberg’s muse, his bitter hotness ratings of women at Harvard and his desire for a date.

What passes for a liberal culture and lifestyle today has rarely been so estranged from feminism and its values. Instead, technological hipness is mistaken for liberalism; edgy is mistaken for cool; being able to “take it” and joke about assault is mistaken for feminism, or sexual liberation.

Okay, let’s argue the other side:  It is true that there are over a billion Facebook users, as Facebook notes in its response. With that many users, you’ll be able to find some content, somewhere, that is criminal, hate-filled, and putrid. It might not get snagged, or snagged quickly enough, in the Facebook censor’s net.

One could also argue that we don’t really want Facebook’s minions offshore to be making these judgments about content. Think about it. Our new truism could be, “Pornography: A Deeply Underpaid, Outsourced Facebook Worker in India Knows It When She Sees It, In Under Three Seconds Flat.”

But the problem is, Facebook has decided to take on the task. They have decided to create their taxonomy of the sexual world, and exercise judgment in what they allow to be posted. Having made that decision, they have to get it right, because it matters:  They’ve assumed a cultural signaling, norm-setting, and traffic direction role in one of the primary social media of this century.

At least then, warped human judgments wouldn’t be as directly involved in creating a sexual universe where the endorsement of rape is considered poor taste and a barely-recognizable image from a mammogram intolerably crude.