“Extremely Thin and Very Well-Dressed:” The Moral Universe According to Vogue 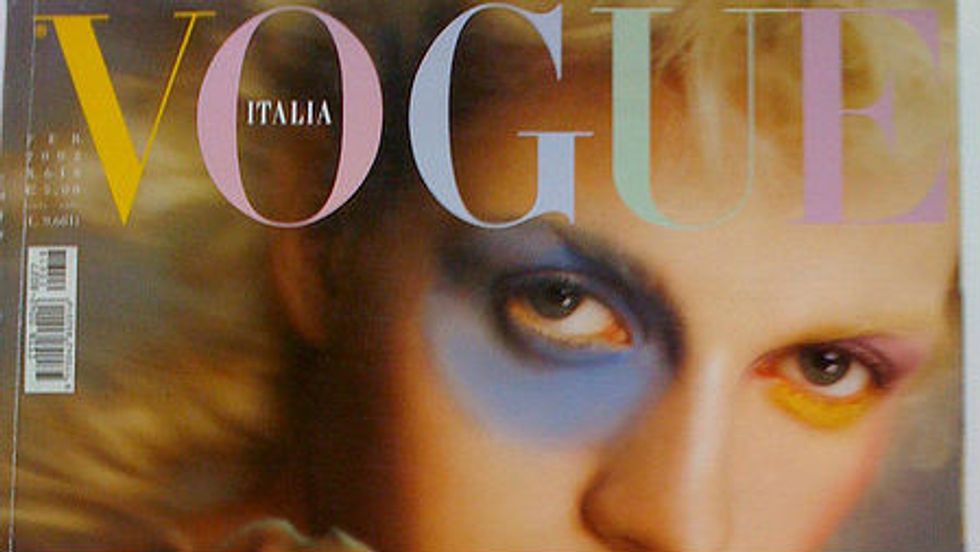 I was touring a tony private school the other day and came home impressed but disquieted.  The teachers and parents were welcoming, genuinely pleasant and unfailingly polite, yet I felt ill at ease.

In talking over my visit with my husband I summarized the source of my discomfort this way: at this school I had the sense that I was in the company of people who are always and reflexively noticing the quality of your shoes.

You’ve probably encountered people or groups of people like this, and perhaps sensed the sly glances downward, and the quick appraisals.

There are people in the world who notice shoes, quite keenly, and those who don’t.

My sojourn into a thoroughly polite but shoe-gazing environment reminded me of the dust-up a few months ago over a flattering profile of the brutal Syrian dictator Assad’s wife, Asma al-Assad, that appeared in the glossy pages of Vogue in June.

The depravity, or vapidity— or depravity-as-vapidity—of featuring a butchering dictator’s wife in a fashion magazine apparently did not register strongly with Vogue editor Anna Wintour at the time, or the article’s author, Joan Juliet Buck, but it did outrage pundits and readers.

Vogue has since removed the profile from its site, and Wintour, while apologizing and implying ignorance as to the extent of Syrian atrocities at the time of publication, more or less threw the author under the bus, rather than shouldering exclusive responsibility for her editorial judgment.

As for Buck, she was given over 3,000 words in which to explain and defend herself on the pages of the newly tabloid-ified, gossip-ified—and soon-to-be-defunct—Newsweek.

Buck’s defense brilliantly illustrates the German word verschlimmbessern, which means to make something worse in an honest but failed effort to improve it. As one pundit put it, “Newsweek gave the author of the infamous Asma-al-Assad Vogue profile about 3,000 words of rope. She used every inch.”

Her apologia couldn’t outwit the underlying preoccupations of the magazine or, perhaps, the writer. They kept popping up. In her original Vogue article Buck made much of Asma al-Assad’s shoes, noting the “flash of red soles” of her Christian Louboutin shoes.

In her defense, she described how uncomfortable she was in Syria by noting “mustached men,…wearing shoes from the 1980s and curiously ill-fitting leather jackets.”

There is a useful gem in this exercise that every adolescent girl should internalize. It’s Buck’s description to NPR about how and why Assad’s wife was deemed a “qualified” subject for a Vogue profile amid stomach-churning atrocities by her husband against the Syrian people:  “Because she was extremely thin and very well-dressed.”

Too often magazines such as Teen Vogue that ply in photo-shopped “extremely thin” female bodies that according to one study leave 75 percent of girls “feeling bad” about themselves after they peruse its glossy pages try to take themselves seriously.

A group of shoe-gazers if ever there was one, they aspire to present themselves as non-shoe-gazers. The danger is that they might convince a few girls and women that it’s so, that when a reader looks at Vogue they’re in conversation with a more contemplative, self-conscious, reality-based enterprise than they really are. In other words, that they’re reading a magazine with a reality principle that transcends the fascinating if shallow surface veneer of the world—its affects, amusing imperfections, and shiny objects.

Buck’s perhaps unpremeditated candor abrades all those self-serving delusions of depth, straight from the source. It gets down to brass tacks: People are deemed worthy of inclusion when they’re extremely thin and rich enough to buy expensive clothes.

With this comment in hand readers might still enjoy Vogue and Teen Vogue for what they are: lavishly-photographed magazines that display extremely thin people who are in some cases almost grotesque in their emaciation in order to sell advertising space, which is a difficult task in traditional magazine publishing today.

The magazines needn’t be discouraging to young women but, rather, approached in the more benign spirit of the carnivalesque. Look, we like going to circuses, too. We gawk at car accidents. We watch horror flicks. Some even enjoy looking through physically anomalous humans in the Guinness Book of World Records. We like to look voyeuristically at unusual or contorted bodies. This interest just can’t be mistaken for anything approaching the moral grid of real life.

It’s a magazine where the most reflexive, visceral response to other humans—be they a dictator’s wife or a mustached Syrian man—is to notice their shoes.