Clowns to the Left of Me, Jokers to the Right, or, Where’s a Feminist to Go? 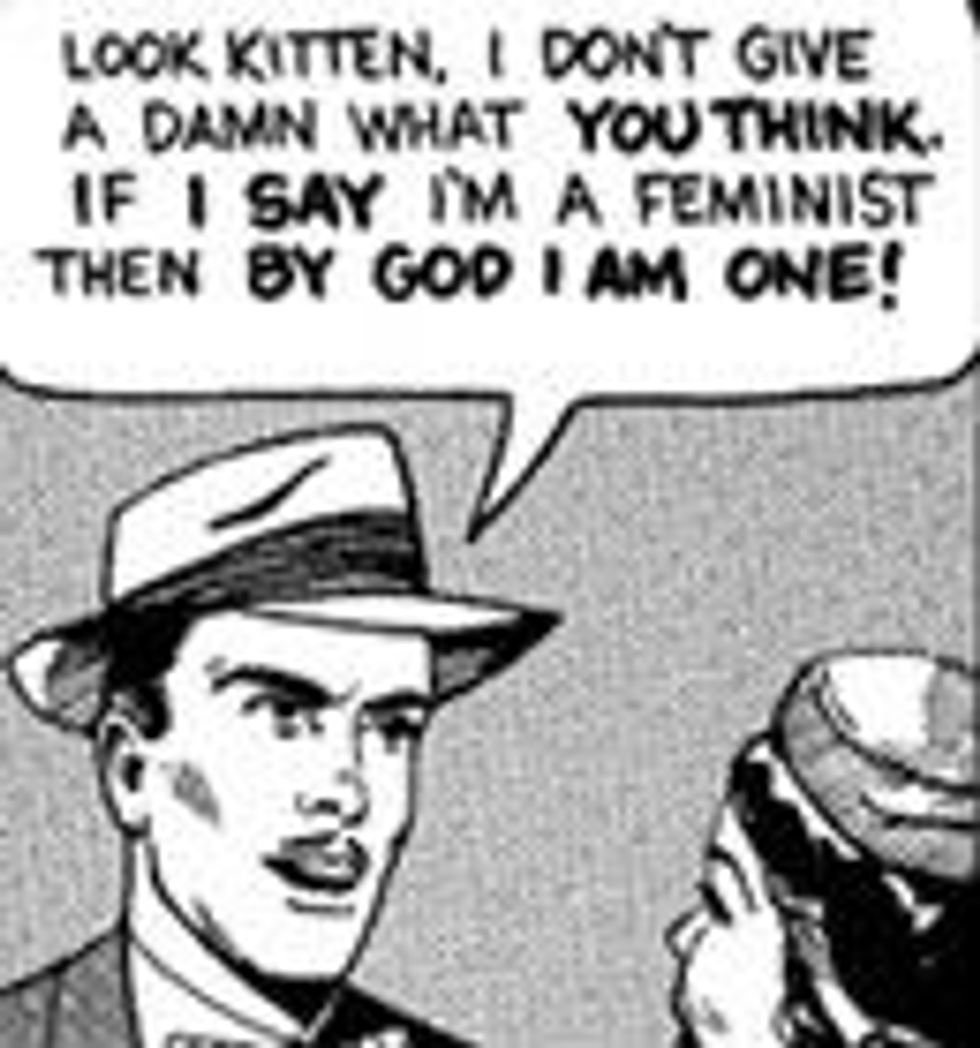 The Jokers to the Right in my title don’t require further introduction.  They're the social conservatives who belittle rape in their anti-abortion zealotry, believe that the control and suppression of women’s libidos will solve the country’s problems, and who are willfully oblivious about women’s bodies, almost as a matter of policy.

To them, women are like an inconvenient third wheel in their relationship with a blastula.

Their party’s no place for a feminist. In the latest example of regressive sexual-economic thought, we have a proposal by Pennsylvania representatives to cut off TANF benefits to women who have too many children—unless they can prove that the child was conceived through rape. And no cheating: In a move that perpetuates the notion that women lie about or over-react to rape, when it’s an under-reported and under-reacted-to crime, the legislative language reminds would-be petitioners that perjury is punishable by law.

War on women? WHAT war on women, the partisans say? Folks, listen, if it walks like duck, squawks like a duck, and look likes a duck, then it’s a duck, already.

I will concede this point, however: The “war on women” isn’t the best coinage. There are more tangible and horrific wars raging in the world today, and we’re not at that level, yet.

Also, what’s going on with the Right isn’t a war so much as a more banal—and frightening—thing: it’s a  consistent, deliberate social agenda to roll back what they see as the deleterious modernizing, liberating, and equalizing social trends of the last 50 years. The more we liberals call it a “war,” the less able we are to see the coherent, non-hyperbolic but deliberate agenda, which needs to be taken seriously on its face.

And the “war” isn’t just against women. It's against men who enjoy the fruits of women’s liberation in their lives—who enjoy companionate, co-equal marriages, for example, or the chance to have a sex life with a “respectable” woman without the expectation that they’ll get married, or who like having good birth control and abortion options to avoid unwanted fatherhood, or who enjoy having female colleagues, or who relish in not having to assume at the age of 23 that their role will be to become the sole breadwinner for a wife and three kids and a pony.

So, Romney’s party isn’t a place where a feminist would want to be hanging out.

At least not under the current social radical iteration. I’m not sure where all those Rockefeller Republican women went, those WASPy types who were always smiling gorgeous teeth and wearing tennis clothes and organizing charity drives and were too polite, discreet and circumspect to be foaming at the mouth about some poor woman’s sex life or pregnancies, somewhere else. I guess there are still some left in Connecticut.

But it’s not all, "Democrats Good/Republicans Bad" for feminists. Ohhhh no.  We also have the Clowns to the Left, which make a feminist feel like she’s got no place to go.

A modest example is the Obama “virgin” commercial that’s causing a stir today. It features Lena Dunham, a star of HBO’s series “Girls,” and must be targeted to a very young demographic that falls way below my radar as a grizzled middle-aged woman. She talks about her “first time”—voting.

If you read about Richard Mourdock on your favorite political site today, and then right after that you watched this “first time” Obama commercial, as I did, then you might think that your choices as a woman, at least as presented in the political ether, are to be deprived of any sexual or personal agency whatsoever, or to be given nothing but sexuality—to be a female who exhibits her liberation, ahem, by being hyper-sexualized, even about things as simple, civic-minded, and non-sexual, one hopes, as voting.

Although doubtless, there’s some “mile high club” equivalent of citizens who have managed to have sex in the voting booth on election day. Maybe that’s who the video targets.

The commercial’s inane, and rather icky. It’s a cynical and mildly degrading ploy to do this—to marshal the vote by coy, puerile hyper-sexualization of thoroughly non-sexual matters for other people’s  amusement.

The commercial’s a small example of why self-proclaimed progressives fall short of the feminist mark, too.  If you’re all hipster and edgy and outré, then that means pushing the envelope relentlessly and hyper-sexualizing everything and being casual and mordant  about things like consent or jokes about rape. Come on, women, just laugh along with it! You’d only be a killjoy, a prude, or, in one of the more bizarre lexicographic political twists of the last two decades, judged “sex-negative” if you don’t. And heaven forbid you get called that!

In the political arena liberal men hurl misogynistic invectives against non-liberal women like Sarah Palin routinely, and think nothing of it. Some do the same toward fellow-traveler women (Hillary Clinton’s treatment in Game Change comes to mind, and columnists who attacked her during the campaign because, hey, liberal men get a “Get out of Jail Free” card for misogynistic snark. Who do we think they are, after all—Todd Akin?).

I know. There’s a huge difference in degree, and in kind, here. And there’s no doubt which tent I’ll be standing and fighting under.

But, still, it’s not a great juxtaposition:  the Obama “virgin” come-on video, or Mourdock’s divine will of rape. Ugh.