The universe is flat, according to scientists. But to say our universe is flat and leave it there would be irresponsible – it’s not quite that simple. So, we must first delve into what scientist mean by “flat” and how they came to such a conclusion.

The Baryon Oscillation Spectroscopic Survey (BOSS) telescope gave astrophysicists a new view of the universe, and a pretty accurate one, too. The telescope down in New Mexico mapped out 1.2 million galaxies in the universe, plotting their locations to an accuracy of one percent. This map represents a tiny sliver of the universe and it was still able to tells us a lot about how it functions on a large scale. With this accurate measurement, cosmologists were able to determine the universe is “extraordinarily flat” and infinite, extending forever throughout space and time.

What does a “flat” universe mean?

When scientists say the universe is flat, they are speaking in geometric terms. At this point, I’m going to ask you to go back to math class, when you learned about parallel lines. So, let’s scale down how cosmologists might rule out that the universe is round, by asking how do we know the Earth is not flat?

Well, one way would be to draw two lines from the equator, going directly north. These lines may start out parallel, but eventually they will intersect. The distance between them does not remain constant. 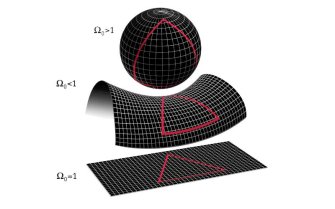 Diagrams of three possible geometries of the universe: closed, open and flat from top to bottom. The closed universe is of finite size and, due to its curvature, traveling far enough in one direction will lead back to one’s starting point. The open and flat universes are infinite and traveling in a constant direction will never lead to the same point. Image and caption text permission of NASA Official: Gary Hinshaw

By using this as the basis for our knowledge, we then must observe how light from a few of these 1.2 million observable galaxies behaves. Scientists noted the light from several galaxies from the observable universe remained parallel to one another; these two lines will stay parallel forever.

“One of the reasons we care is that a flat universe has implications for whether the universe is infinite,” said David Schlegel, a member of the Physics Division of the U.S. Department of Energy’s Lawrence Berkeley National Laboratory. “That means – while we can’t say with certainty that it will never come to an end – it’s likely the universe extends forever in space and will go on forever in time. Our results are consistent with an infinite universe.”

Geometrically, the universe is flat. Parallel lines stay parallel, but it doesn’t tell us about the topology of the universe. Scientists believe the universe could have one of 18 different shapes.It could be a Möbius stripfor all we know—a shape where space bends and distorts, but lines stay parallel, ultimately connecting one end of space to another. That is to say, you could start from one point in the universe and drive in a straight line, you would end up back where you came.

But we cannot yet determine what shape the universe has taken because of our small view.

Tags
astrophysicsBaryon Oscillation Spectroscopic SurveycosmologyDavid SchlegelflatMöbius stripnasashapetopologyuniverse
In this article
astrophysicsBaryon Oscillation Spectroscopic SurveycosmologyDavid SchlegelflatMöbius stripnasashapetopologyuniverse
Related
13.8
Why stars never collide and galaxies always do
We only need two numbers to understand why.
The Universe in 90 minutes: The Multiverse, time, free will, God, & more
Everything you ever wanted to know about the Universe, explained by physicist Sean Carroll.
▸
1:33:47 min
—
with
Sean Carroll
Hard Science
Astronomers discover closest known black hole to Earth, Gaia BH1
At 1,600 light years away, the black hole is practically in our cosmic backyard.
13.8
A new window to the early universe (and aliens?)
The upcoming launch of the James Webb Space Telescope is the event of a lifetime.
Starts With A Bang
How to understand Einstein’s equation for general relativity
Mathematically, it is a monster, but we can understand it in plain English.
Up Next
Starts With A Bang
An X-ray surprise!
When black holes stop eating, galaxies fade away.“I’ll never, ever be full. I’ll always be hungry. Obviously, I’m not talking about food.” –Dwayne ‘The Rock’ JohnsonMost large galaxies are illuminated by […]