Somewhere on Northwestern’s campus may be the answer to a 2600-year-old mystery: exactly where static electricity comes from. Every known material creates it, and it is often disproportionately powerful compared to the amount of energy it takes to create. Yet, amazingly, this everyday electrical phenomenon had no widely accepted scientific explanation — perhaps, until now.

The solution, hidden in a dense thicket of math, was created by Alex Lin and Christopher Mizzi, two Northwestern doctoral students working in the lab of Professor Laurence Marks. Their answer lies in microscopic protrusions on a material’s surface, and in two old physics concepts that had been overlooked for decades.

If the model holds up, it may have broad practical applications, helping scientists suppress static sparks where they can be dangerous — and perhaps even harnessing static electricity to power medical devices or to boost wind generators.

“Everybody has seen triboelectricity,” says Marks, in his low, laconic English accent, using the scientific term for static electricity. “But when you start asking ‘well, why does it occur?’ nobody really knows. Or at least nobody knew, at least as far as I’m concerned.”

The first record of the phenomena in the Western world was in 600 BC. Thales of Miletus, the father of Greek philosophy, rubbed a piece of amber against fur. His newly charged pelt began attracting dust like a copy of Infinite Jest. Since then, many theories for what causes static electricity followed; none have been accepted by everyone.

Marks thought the answer might lie in two phenomena we already understand: friction and flexoelectricity. Friction is well understood and clearly crucial to static electricity, somehow, as anyone who has rubbed their socks on carpet can attest.

The other component (flexoelectricity) is a bit more exotic. All materials have a molecular structure, and when that structure is bent in irregular ways, that shifting can create an electric charge. Marks thought that combining these two concepts might create a useful model for triboelectricity.

“I eventually persuaded Alex (Lin) and Chris (Mizzi) — with a little encouragement — and they did most of the work,” Marks laughs. Lin and Mizzi, bouncing ideas off Marks, pushed forward for half a year before arriving at their model.

Even surfaces that look completely flat are covered with small protrusions at the nanoscale. When these tiny protrusions rub against each other, thanks to friction, they create flexoelectricity; the charge created by this effect causes what we call static electricity. It’s a beautifully simple model, made from well-worn parts, even as the processes it explains are complex. 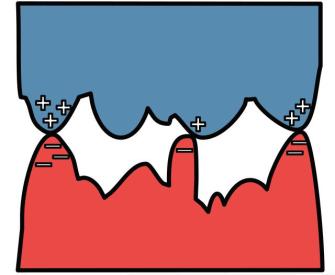 The Marks lab believes that tiny protrusions on the surface of materials generate polarization when they are bent. This effect, known as flexoelectricity, is then what causes static electricity. Credit: Schematic courtesy of Laurence Marks/Northwestern

But to prove it, Lin and Mizzi had to pour through the scientific record, looking for equations that modeled friction and flexoelectricity. Shower thinking punctuated the process, stepping away as they danced with the millennia-old mystery. They searched papers online, gathering all the equations they might need, then working through the math by hand, until finally the cloud of numbers and symbols coalesced into a model that really worked.

“Ultimately, we wanted to capture the big picture of it,” Lin says.

The model makes sense, says Michael McAlpine, a professor of engineering at the University of Minnesota. “It’s such a simple explanation, I was surprised I didn’t put my finger on that,” McAlpine says. The Occam’s Razor-approved end result, and the fact that the model builds off tried and true equations, make the model attractive as well.

The model provides a convincing explanation for static electricity produced between the same kind of material, but what causes it in other types of material — say, a liquid rubbing against a gas — will need to be tested against the model too. Every material on earth can create static electricity, so there’s no shortage of test subjects.

If the model proves accurate, the applications could be broad. Nanogenerators are tiny devices that harvest the surprisingly robust energy of static electricity. With enough basic knowledge, we could begin using the power of any friction against any material.

Triboelectric power has plenty of potential, says Wenzhuo Wu, an assistant professor of engineering at Purdue. If the basics of static electricity are better understood, we could maximize the efficiency of wind or wave power generators, Wu says.

The body’s own movement could be used to power internal medical devices. Imagine being able to create a roof shaped to harness the power of a raindrop — the friction of the rain passing over the surface — to generate triboelectricity, powering the building below it.

Or the model may help do the exact opposite. Basic knowledge can lead to better controlling, or even eliminating, static electricity. The phenomena is shockingly dangerous in any environment where you need to avoid a spark. An accurate understanding of what causes triboelectricity can lay the groundwork for how to prevent it.

“People have been thinking about this, and also experiencing this, without even realizing what they were experiencing for a very long time,” Mizzi says. “The scope of that is really neat and humbling.”

The laws of physics obey certain symmetries and defy others. It’s theoretically tempting to add new ones, but reality doesn’t agree.
The Present

Some U.S. intelligence operatives have suggested foreign adversaries may be using “directed-energy” weapons against Americans.
Starts With A Bang

At a fundamental level, nobody knows whether gravity is truly quantum in nature. A novel experiment strongly hints that it is.
Hard Science

2021: a year physicists asked, ‘What lies beyond the Standard Model?’

New technology is helping physicists move forward in the search for the Theory of Everything.
13.8

In movies and TV shows, aliens look like pointy-eared humans. Is this realistic? If evolution is predictable, then it very well might be.
Up Next
Strange Maps

Even 1500 years after the fall of Rome, its western border can still be seen on German street maps.