The best-known among these is his captivating “Girl with a Pearl Earring.” Part of what makes it so arresting is Vermeer’s masterful use of light — his model’s eyes practically glow with life and intelligence, staring straight back into your own. You may not be as familiar with “View of Delft,” a landscape that writer Marcel Proust declared “the most beautiful painting in the world.” Vermeer’s genius here makes viewing this masterpiece feel as if you’re actually there, warmed by the morning sun that illuminates the scene across the water.

Or is it the afternoon sun? Not much is known about Vermeer’s life, and people have puzzled over this landscape for years, trying to identify exactly the view it depicts and when Vermeer could have painted it. Some experts had tagged its source of light as coming from the west, while others felt that it must’ve been directly overhead.

Now a team of researchers from Texas State University led by astronomer Donald Olsen have solved the riddle, thanks in part to the uncanny manner in which Vermeer was able to capture the play of light and shadow. When was it painted? According to the study, it was September 3 or 4, 1659 at 8 a.m. from a second-story inn window.

The research is published in the March 2020 issue of astronomy magazine Sky & Telescope. 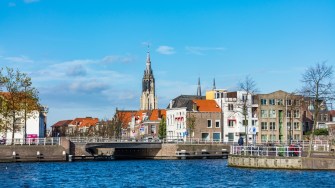 Delft today, a bit to the right of the painter’s view and closer-inImage source: Hit1912/Shutterstock

The first question to be resolved was the location from which Vermeer painted the picture, and what he was painting.

Says Olson, “The students and I worked for about a year on this project. We spent a lot of time studying the topography of the town, using maps from the 17th and 19th centuries and Google Earth.”

They concluded that Vermeer was looking northward from the second story of an inn across the triangular Kolk harbor, located at the southern end of his hometown. The students mapped out the painting’s landmarks with Google Earth and calculated the angles and distances to reveal that it represented a 42-degree-wide view of the harbor from Vermeer’s vantage point. “Google Earth is spectacularly accurate when it comes to distances and angles, so we used it as our measuring stick,” Sánchez says.

The online research was followed up with a physical visit to Delph by Olson and Droescher, during which the retired professors took their own measurements and an array of photographs to confirm and expand on the students’ conclusions. 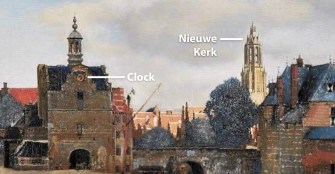 Important clues can be found in the Nieuwe Kerk tower, located to the right of landscape’s center. Some experts concluded, for example, that the painting had been done in 1660, but the tower rules out that possibility. While Vermeer’s rendering shows the openings in the belfry as being empty, carillon bells — still present today — were installed there starting in April 1660. This would still leave the early months of 1660, except that in Delft there would be no leaves on the painting’s trees before late April or early May. So much for 1660.

As for the time, look at the clock in the picture. To many, the clock has two hands that show a time just after 7 a.m. The authors of the new research noticed in other paintings from the period that the two hands of a clock were always lined up. Further research revealed, however, that clocks of this period didn’t actually have two hands — they had just one, an hour hand. With this in mind, Vermeer’s clock looks a lot more like 8 a.m.

Finding the date was a bit trickier, but again the octagonal Nieuwe Kerk tower provided an answer. Each of the tower’s eight corners has its own stone column. The right side of the center-most column is lit, while its left is in shadow. On the next column to the left, however, is a thin sliver of light not blocked by the center column. Trusting Vermeer’s careful depiction of light and shadow, the team was able to use this subtle detail to deduce the precise angle of sunlight shown in the painting. “That’s our key,” says Olson. “That’s the sensitive indicator of where the sun has to be to do that, to just skim the one projection and illuminate the other. The pattern of light and shadows was a sensitive indicator of the position of the sun.”

The team used astronomical software to identify any days on which the sun was at precisely that angle around 8 in the morning. The software returned two periods, one in April 1660, which was discarded for the reasons noted above, and the other around September 3-4, 1659.

The days identified by the Texas State researchers are most likely those on which Vermeer made the preliminary observations from which he executed the painting. Says Olson, “Vermeer is known to have worked slowly. Completing all the details on the large canvas of his masterpiece may have taken weeks, months or even years.”

Still, “His remarkably accurate depiction of the distinctive and fleeting pattern of light and shadows on the Nieuwe Kerk suggests that at least this detail was inspired by direct observation of the sunlit tower rising above the wall and roofs of Delft.”

And now we know when.

Tags
architectureartastronomydelftinternetlightphysicsvermeer
In this article
architectureartastronomydelftinternetlightphysicsvermeer
Related
High Culture
Did Paul Cézanne hide an early self-portrait underneath a 160-year-old still life?
To answer that question, we may have to figure out when the famed painter started to go bald.
Thinking
Creative wisdom from Rick Rubin: embrace your inner gatekeeper
Unlock the full potential of your creativity with holistic detachment. This is the way of the editor.
The Well
This is what the fourth dimension looks like
Left–Right, Back–Forth, Up–Down. What’s the fourth dimension?
▸
3 min
—
with
Brian Greene
The neuroscience of loving music
Humans are musical animals four million years in the making, explained by music expert Michael Spitzer.
▸
8 min
—
with
Michael Spitzer
High Culture
The most controversial painting in Russian history
Created in the 1880s, “Ivan the Terrible and His Son Ivan,” which depicts a father murdering his son, divides Russians to this day.
Up Next
Strange Maps
Waving to the Great Mapmaker in the Sky
Some intriguing examples of people grooming the land for the unseen observer above.