Once, in middle school, a gang of boys and I were lured to a spot behind the Dunkin’ Donuts in our town. We went after dark, to a place where a kid from school witnessed a paranormal experience. Once there, we saw nothing. We chided our classmate until suddenly, a column of white light appeared out of nowhere. We scattered.

It sustained itself for a few minutes. Then suddenly, it cut off. A few moments later, just as mysteriously, it went on again. We stayed there quietly studying it, scared out of our minds. Until someone in our group finally pointed out a streetlight overhead. The bulb was getting old. That was the last time I believed in ghosts.

Do you? If so, you’re in good company. 45% of Americans do. In one poll, 28% of them admitted they’d had contact with one, personally. Senior research fellow at the Committee for Skeptical Inquiry Joe Nickell is the world’s sole, full-time, scientific paranormal investigator. After five decades of research, he hasn’t turned up a shred of evidence that points to the existence of ghosts. Magicians Harry Houdini and James Randi arrived at a similar place.

It’s not for lack of trying. In a video for Vox, Nickell says he’s employed blood pattern analysis, linguistic analysis, aspects of psychology, and more. It isn’t just him. Not one haunting or ghost sighting has ever rendered any evidence.

One of the problems is, it’s hard to grab raw data. All we usually have is a personal account. And these vary widely. One person will interact with an actual human figure, while another will observe mere objects flying across the room. There are a few grainy, blurs in some photos. But it’s hard to extrapolate from that. 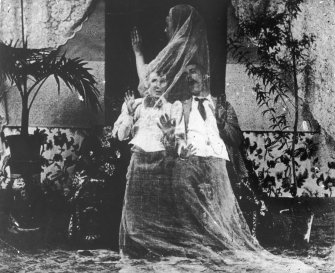 Photographic evidence such as this isn’t enough to go on. Getty Images.

Though electromagnetic field (EMF) meters have been made popular by movies like Ghostbusters and TV shows such as Paranormal Lockdown and Ghost Hunters, there’s no scientific proof of any link between supernatural phenomenon and the magnetic field. Despite a general lack of evidence, such experiences feel poignant and real.

In a recent TED talk, Carrie Poppy explains her brush with the paranormal, how it made her feel, and later on, what she came to realize about it. She’s the co-host of the popular podcast Oh No Ross and Carrie, which explores and demystifies spiritual, religious, and paranormal topics, among others, through a scientific lens.

At the time her ghost sighting occurred, she was alone in her house. Suddenly, she felt a presence. Poppy felt like she was being watched. The feeling grew and grew and as it did, a pressure began to build inside her chest. The feeling increased slowly over the course of a week and rose to a fever pitch. She started to hear whispering sounds and became convinced that her house was haunted. Poppy tried to do a cleansing by burning a sage stick and other things. But no matter what she tried, the pressure on her chest got worse. It was also growing painful.

Finally, she took to the internet and arrived on a ghost forum for skeptics. She told them what she was experiencing and one of them said she had the symptoms for carbon monoxide poisoning. These include pressure on the chest and auditory hallucinations. The utility worker who rectified the problem, told her that if she hadn’t of gotten it fixed when she did, she wouldn’t have been alive the next morning. 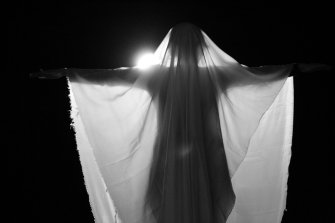 There are many scientific explanations for ghost sightings. Ghost. By: Jordi Carrasco. Flickr.

The process by which one experiences something that isn’t there is called misperceived self-representation. So what else might induce this, besides carbon monoxide poisoning, brain damage, or an episode related to mental illness? Well, several things actually. There is a condition called sleep paralysis for one, also known as waking dreams.

This affects around 8% of the population. It usually occurs in the twilight hours of the morning, when one is between a waking and dreaming state. You can’t move your body and sometimes experience visual hallucinations. Grief also tends to increase the chances of a ghostly encounter. Psychologists say it might be a way for the mind to process and deal with loss. Usually, the person they see is a comforting figure who appears serene.

Another ghost-inducing phenomenon is called infrasound. This is a vibration that occurs below our normal range of hearing. That’s below 20 hertz (Hz). Certain machinery (like engines), whales, and extreme weather can all cause infrasound.

Some studies suggest that it can result in symptoms including feelings of depression, the chills, and the sneaking suspicion that someone is watching you. According to Hayden Planetarium director and astrophysicist Neil deGrasse Tyson, infrasound at 18 Hz vibrates at such a rate that the eye can pick it up, which might cause visual hallucinations.

So if you or someone you know claims to have seen a ghost, believe them. But also, look for what evidence or phenomenon might be behind the sighting. You could end up finding a faulty lightbulb was the culprit all along.

To learn about the science behind ghost sightings, click here:

Humans won’t survive if we stay on Earth. Michio Kaku explains.
▸
7 min
—
with
Michio Kaku
Up Next
Smart Skills

Who Are Internet Trolls? Psychologists Build a Profile

Psychopathy and sadism play a prominent role among those who choose to take it up.