It’s likely you’ve seen some of the fascinating videos of starling murmurations, great swarms of birds mysteriously flying as if with a single mind. These gigantic shapes swoop and swirl, shapeshifting their way through the skies while maintaining miraculous integrity. Maybe you’ve seen schools of fish shifting together into new shapes in likewise dazzling displays of synchrony.

How do these things happen? Consider them super-sized examples of a newly described state of matter that scientists at the University of Leicester in the U.K. are calling “swirlons.” And swirlons are something new: They stand in some ways outside Newtonian law.

Swirlons are described in a paper recently published in Scientific Reports. 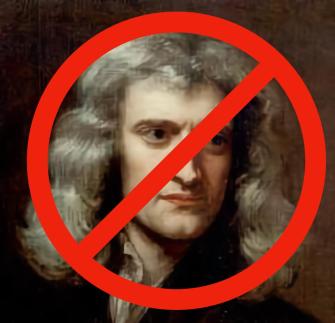 It appears that the Second Law relates only to passive, non-living objects at small and large scales. Swirlons, however, are comprised of active, living matter that moves courtesy of its own internal force. In this context, individual starlings are analogous to self-propelled particles within the larger swirlonic object, their flock. 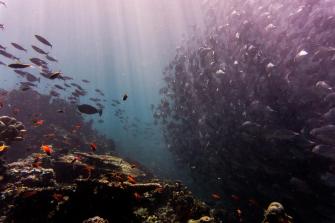 The scientists at Leicester, led by mathematician Nikolai Brilliantov, came upon swirlonic matter as they developed computer models of self-propelled particles similar to simple bacteria or nanoparticles. They were interested in better understanding the movement of human crowds evacuating a crowded space, and these particles served as human stand-ins.

The word “swirlonic” comes from the circular direction in which the scientists witnessed their particles milling about in clusters that operated together as larger quasi-particles.

“We were completely baffled,” says Brilliantov, “to witness how these quasi-particles swirl within active matter, behaving like individual super-particles with surprising properties including not moving with acceleration when force is applied, and coalescing upon collision to form swirlons of a larger mass.”

Brilliantov tells Live Science, “[They] just move with a constant velocity, which is absolutely surprising.”

It’s not the first time such behavior has been seen, but the first time it’s been identified as a distinct state of matter. Says Brilliantov, “These patterns have previously been observed for animals at different evolution stages, ranging from plant-animal worms and insects to fish, but rather as singular structures, not as a phase which borders other phases, resembling gaseous and liquid phases of ‘normal’ matter.”

The researchers also saw that swirlonic particles operate on a sort of “one for all, all for one” basis. With passive particles such as water, different individual particles can exist in different states: some may evaporate into gas as others remain as liquid. The models of active particles, on the other hand, stuck together in the same state as either a liquid, solid, or gas.

Brilliantov and his colleagues hope to explore swirlons further, moving beyond their simulation into real-world investigations and experiments.

The researchers are also developing more sophisticated models that mimic the behavior of swirlonic animals such as starlings, fish, and insects. In these models, the active particles will have information-processing capabilities that allow them to make movement decisions as living creatures presumably do. They hope these models will reveal some of the secrets behind flocking, schooling, and swarming.

Another future possibility is creating man-made active particles that can self-assemble. Other Leicester experts agree that this is reason alone to continue researching swirlons.

In any event, says study co-author Ivan Tyukin, “It is always exciting to consider deepening our understanding of novel phenomena and their guiding physical principles. What we know to date is so much less than what there is to know. The phenomenon of the ‘swirlon’ is part of the tip of the iceberg of hidden knowledge. It leaves us with the eternal question: ‘what else don’t we know’?”

Tags
animalsbacteriabiomechanicsdiscoveryfishparticle physicsphysicsstarlings
In this article
animalsbacteriabiomechanicsdiscoveryfishparticle physicsphysicsstarlings
Related
Starts With A Bang
Ask Ethan: Do my atoms really “touch” each other?
When you bring two fingers together, you can feel them “touch” each other. But are your atoms really touching, and if so, how?
Hard Science
200 years of exploring Antarctica
What we’ve learning from the world’s coldest, most forbidding, and most peaceful continent.
13.8
Einstein’s quantum ghost is here to stay
To Einstein, nature had to be rational. But quantum physics showed us that there was not always a way to make it so.
Strange Maps
The great European house cat migration
Ancient bones reveal that domesticated felines were at home in Pre-Neolithic Poland around 8,000 years ago.
Life
How artificial intelligence is helping us decode animal languages
Communication among cetaceans, like whales and dolphins, looks especially promising.
Up Next
The Present
Is it time to decriminalize prostitution? Two New York bills answer yes in unique ways
One bill hopes to repeal the crime of selling sex and expand social services; the other would legalize the entire sex trade.