It should come as no surprise that microbiology is a difficult discipline. The sheer amount of work that it takes to be knowledgeable about the current state of the field is staggering, and advancing the field as a whole is even more challenging. A recent study out of Cincinnati Children’s Hospital has made a significant advancement, with researchers growing a human esophagus using stem cells for the first time.

The esophagus in question wasn’t very large — just 800 micrometers long, which works out to be about 0.03 inches. (We’re still a far way off from growing whole human organs in a laboratory.) However, this research represents an important step in that direction, and the ability to grow small models of organs (called organoids) makes us better at developing treatments for common diseases affecting those organs. What’s more, the new research also means that it will be possible to regenerate damaged tissue in existing esophagi. 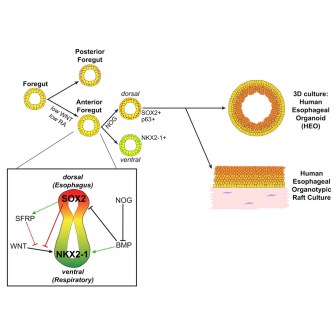 Developing this small esophagus organoid took a lot of precision. The 800-micrometer organoid was grown over the period of two months, but it started out as a slurry of pluripotent stem cells (PSCs). Unlike adult stem cells, which can only grow into specific, specialized types of tissues, PSCs can develop into any type of cell in the body. Essentially, they are our original components — every human started off as a similar slurry of PSCs.

The researchers exposed these cells to precise amounts of different chemicals that recreated the kind of events a PSC would undergo in order to develop into an esophagus in a normal developing fetus. These chemicals manipulated cellular signaling pathways — essentially, a chain of reactions that occur when a cell is exposed to a certain molecule. In the cell, a cascading series of reactions occurs that triggers some kind of event in a cell, such as cell death, replication, or, in this case, differentiation into esophagus cells.

Previous studies had tried to develop human esophagus organoids, but these usually ended up as a mixture of different tissues, including those found in the pharynx, the esophagus, and the respiratory tract. To develop esophageal tissues, the researchers needed to precisely time similarly precise quantities of chemicals to trigger the right signaling pathways for the right amount of time.

What’s useful about this?

Growing a model of the human esophagus is an interesting project, but science like this isn’t done out of sheer curiosity. Regarding its utility, Jim Wells, a researcher working on the project, said, “In addition to being a new model to study birth defects like esophageal atresia, the organoids can be used to study diseases like eosinophilic esophagitis and Barrett’s metaplasia, or to bioengineer genetically matched esophageal tissue for individual patients.” There are other potential applications of this research on esophageal cancer, gastroesophageal reflux disease (GERD), and achalasia, which affects the esophagus’s lower muscles, preventing food from passing through. The researchers noted that all of these conditions need better treatments.

To demonstrate the usefulness of this model organ, the researchers examined the impact of the SOX2 gene on the development of the esophagus. In both humans and mice, when SOX2 is repressed or inactivated, the esophagus peters out and fails to connect to the stomach. For babies born with esophageal atresia, this condition can be life-threatening and requires surgery to correct.

Researchers have known that SOX2 was associated with this condition, but the exact mechanism was unknown. By studying the growth of the esophageal organoid and comparing it with the esophagi of mice whose Sox2 genes had been inactivated, the researchers discovered that a molecule called Wnt was the likely reason behind esophageal atresia. Remember how growing this organoid require precisely timed applications of various chemicals? Wnt works like that to — only in a developing body, the SOX2 gene inhibits the amount of Wnt the cells are exposed to. When SOX2 doesn’t work correctly, Wnt encourages developing cells to become part of the respiratory tract rather than the esophagus, resulting in esophageal atresia.

This kind of work is very much in the early stages. Before 1998, scientists had no idea how to harvest human stem cells, and now we’re building model organs with them. While growing an entire organ is still very much a thing of the future, it’s important to remember that every step along the way to that goal will make use better at fighting disease, saving lives, and understanding how the human body functions.

Why are we here? What is everything made of? This theoretical physicist says science isn’t the right way to answer these questions.
▸
6 min
—
with
Jim Al-Khalili
The Well

What lies in store for humanity? Theoretical physicist Michio Kaku explains how different life will be for your descendants—and maybe your future self, if the timing works out.
▸
with
Michio Kaku
Up Next
The Present

Here’s the link to watch it live.