On Wednesday afternoon, a SpaceX rocket is set to launch two NASA astronauts into space on a mission to the International Space Station. If successful, it’ll be the first time a private company has put humans into orbit, and the first time astronauts have launched from American soil since NASA’s Space Shuttle program ended in 2011.

At 4:33 p.m E.T., SpaceX’s Falcon 9 rocket is set to take off from the company’s Launch Complex 39A site in Cape Canaveral, Florida. About 90 minutes before launch, NASA astronauts Bob Behnken and Doug Hurley will walk across a walkway 230 feet above the ground and climb into Crew Dragon — the SpaceX capsule that sits atop the Falcon 9 rocket. 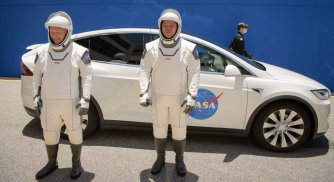 It won’t be the Crew Dragon’s first mission. Last year, SpaceX successfully sent a Crew Dragon carrying only cargo to the International Space Station. But the company has also suffered setbacks with the capsule, including thruster and parachute complications, and a 2019 explosion that occurred during testing.

If successful, Falcon 9 will launch the Dragon capsule into low Earth orbit 12 minutes after takeoff. The rocket will then begin a controlled descent to its landing site on a drone ship in the Atlantic Ocean. Hurley and Behnken will manually fly Crew Dragon toward the ISS.

When they approach the station, Crew Dragon’s autonomous docking system will take over, and the capsule will connect to the station at 11:29 a.m. on Thursday. The NASA astronauts will then board the ISS, where they’ll likely remain for several months. (NASA has yet to confirm the details of the return mission.) 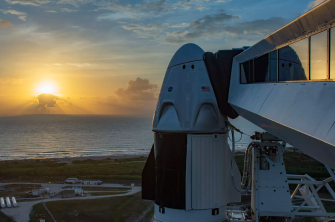 Walkway to SpaceX’s Crew Dragon atop the Falcon 9 rocketPhoto: SpaceX

In addition to being a milestone for private spaceflight, Wednesday’s mission — called Demo-2 — is also the culmination of NASA’s Commercial Crew Program. Started in 2010, the federally funded program aims to pair NASA with private companies — like SpaceX and Boeing — to transport astronauts to and from the ISS. The mission also represents the end of an era in which the U.S. has relied on Russia to transport American astronauts to the ISS.

“This is a unique opportunity to bring all of America together in one moment in time and say, look at how bright the future is,” Jim Bridenstine, NASA’s administrator, said at a news conference on Tuesday.

Here’s where you can live-stream the historic launch:

The American Museum of Natural History will begin streaming around 11 a.m. E.T. The live-stream event will begin with curator Ruth Angus examining “the awe-inspiring leap from imagination to scientific achievement in space exploration.” At 1 p.m., the museum’s Director of Astrovisualization Carter Emmart and astrophysicist Jackie Faherty will take viewers on a virtual field trip to the ISS. Around 4 p.m., Hayden Planetarium Director Neil deGrasse Tyson will join Faherty and museum curator Michael Shara to provide live commentary on the launch.

NASA’s live-streaming channel will begin covering the launch Wednesday at 12 p.m. E.T. The agency will provide live commentary, and will also show the astronauts joining the crew of the ISS after the capsule docks with the station.

SpaceX’s YouTube channel will also live-stream the launch, though the link is not yet available. We’ll update it as it comes online.

UPDATE: The SpaceX link is now active and the live-stream is scheduled to begin at 12:15 p.m.

Tags
astronautISSnasaRocketsspacespacex
In this article
astronautISSnasaRocketsspacespacex
Related
Life
“I went to space and discovered an enormous lie”
What astronaut Ron Garan saw in space changed his life forever – here’s what it taught him.
▸
8 min
—
with
Ron Garan
Videos
The true story behind Carl Sagan’s cult classic, Contact
Do aliens dream about meeting us, too?
▸
with
Jill Tarter
Videos
NASA astronaut explains humanity’s trajectory to Mars
The first human that isn’t an Earthling could be in our lifetime.
▸
5 min
—
with
Robert Curbeam
How Earth’s 23.4° tilt makes life beautiful
Rituals come as much from religion as they do from the way Earth spins around the Sun.
▸
4 min
—
with
Sasha Sagan
Videos
Michio Kaku: “We need a second planet”
Humans won’t survive if we stay on Earth. Michio Kaku explains.
▸
7 min
—
with
Michio Kaku
Up Next
The Present
The world and workforce need wisdom. Why don’t universities teach it?
Universities claim to prepare students for the world. How many actually do it?